What do you do when someone tells you that you are not mentally tough enough? Scotti’s answer was to sign up for the 2019 Silk Road Mountain Race as a pair with my husband Ernie, and take home the win. Since then she has set multiple FKT at Arkansas High Country, has unfinished business with the Atlas Mountain Race and it hot of a new FKT for Stagecoach 400.

The big mountain, the big city.

I’ve never done research on a place I’m traveling to. I’ve never read the top 10 lists and taken notes or looked into the history or geography or culture. I’ve always followed my gut and shown up jet-lagged and blind and let the bike and whoever I meet along the way lead me through discovering a place. I don’t often regret not making it to the most known places. I’ve found stumbling through a place is how to really get to know it’s charm.

Most of the bikes we build here at Rodeo Labs are customized to one extent or another. Some minimally, perhaps with different component sizes or a decal color we don’t typically use. Other are maximally customized, like for instance this build we just completed for Jason.

Utah’s White Rim Trail seems to be enjoying a bit of a popularity boom in recent years thanks in large part to repeated attempts to set new Fastest Known Time records by a non-stop stream of world class riders. While those efforts are incredible from a human achievement point of view they don’t resonate much with me as it relates to my relationship with this beautiful and incredibly unique part of the world. I come to White Rim with slower times in mind, and with thoughts of long miles spent undisturbed by life’s complexities.

I’m just now entering the stage of the bike ride when the hang over moves from the head to the legs. The road has finally returned after dropping off sandy double track and the wind is soft as we climb into the mountains surrounding Anza-Borrego. The early morning light is splitting canyon walls and we pedal on. It’s day two of the trip and we’re already dancing with God.

In April of 2019 we packed up and headed to Sea Otter Classic for our first ever expo / trade show. Over the course of that week in Monterey we had such a good time showing our bikes, meeting owners and new people, and sampling the local riding. As soon as we returned to Denver we set out looking for which expo we would attend next. With such a large contingent of owners located on the East Coast the decision was made to look for an expo on that side of the country. It didn’t take long to single out Philly Bike Expo as the show to attend. Philly has been a show we’ve enjoyed reading about in previous years and the vibe always seemed upbeat and friendly from afar. We asked around a bit and our thoughts were confirmed. Everyone said that Philly was the show to be at, so we quickly registered and pinned it on the calendar.

We didn’t have a plan for what we wanted to show or talk about at Philly initially but as the show neared we started gathering our thoughts. The show’s date on the calendar coincided pretty well with the development of our next generation Flaanimal 5.0 and we set a target for having a prototype preview ready to show, and we also asked ourselves what would be cool to do with the TD3 as a concept build. Two bikes began to take shape in our minds…

Also taking shape was the design of the booth itself. After our experience at Sea Otter we left with the sense that a lot of companies are entering the gravel / adventure space to cash in on the growth and opportunity. If you’re a corporation with a primary objective to sell as many bikes as possible then that is fine but for Philly we wanted to bring a booth along that showed that we’re equally interested in bikes, culture, and community. We decided to build a booth around our library of photos that we’ve collected over the last six years of riding, exploring, and making bikes. We asked owners to send in photos as well and we combined it all into a visual backdrop for our bikes that told our story without using many words.

For the Traildonkey 3.0 that we brought we wanted to do an out of the box build in a way that we hadn’t previously built one before so we worked with Fox to spec out an AX 40mm front suspension fork. A PNW Coast dropper / suspension post in the back provides 40mm of travel in the rear for a balanced feel. We asked Archer Components if they could build a drop bar specific version of their D1x wireless shifting intermediary. This allowed us to combine TRP Hylex RS levers with a Shimano XT 12 speed drivetrain which would otherwise not be do-able on a drop bar bike. Exile Designs created special matching frame bag / top tube bag / and Fannie Packer with custom printed local Table Mountain Topograhy on the main panels. The finished bike is pretty bonkers and started a lot of fun conversations. How far can a gravel / adventure bike go before it becomes a mountain bike? That seems to be a recurring question these days but to us it doesn’t even matter. Bikes are bikes. To us pushing the Traildonkey 3 platform about as far as we could was a blast, and the eventual owner of this bike is going to have quite a party when they throw their leg over it. (This bike is now available for sale, but with a GRX drivetrain instead of the pre-production Archer prototype shifting. Shoot us a note if you are interested) 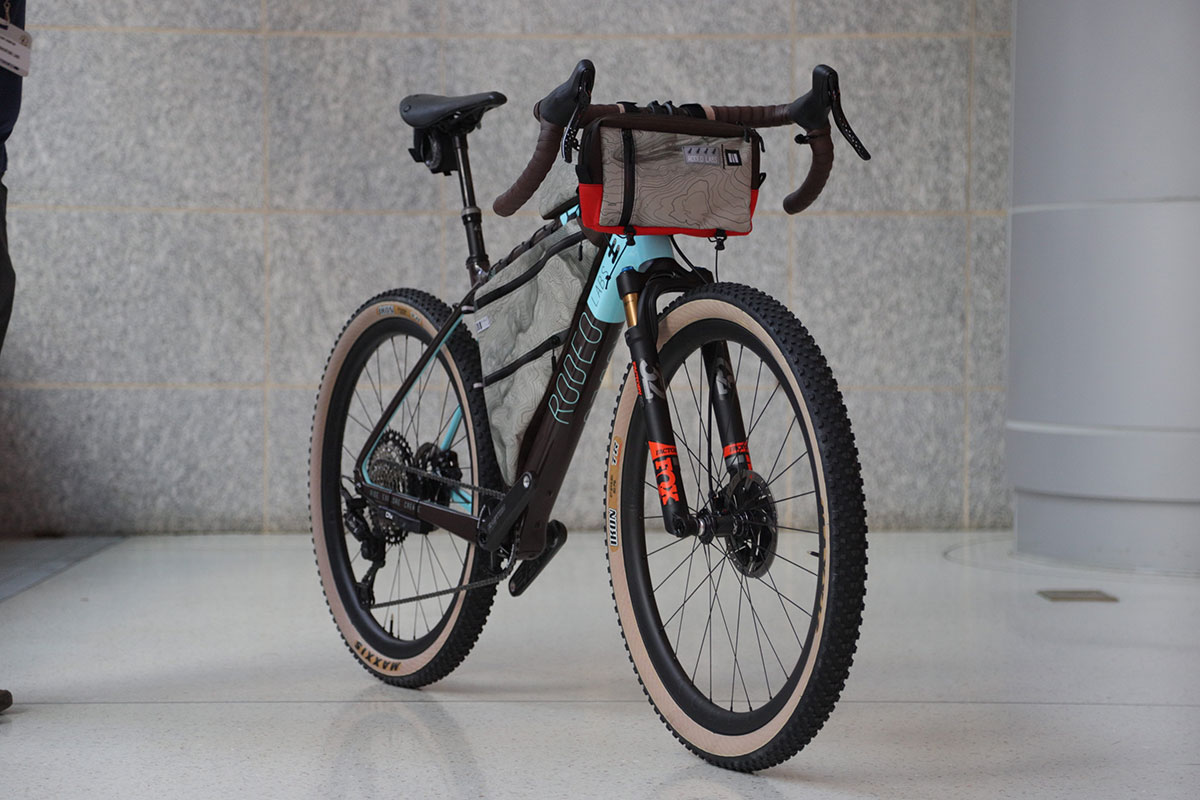 By the time Philly arrived we were extremely excited to preview the Flaanimal 5.0 prototype and we barely finished the frameset in time. It was built only 24 hours before the show just like those hot rod shows that I’ve seen on TV. I always wonder why everything comes down to the wire on those shows if they know that they have months to prepare for the show but now I get it. Developing a bike is difficult to begin with but developing a bike and trying to get it just right in time for it’s public debut is another level of difficulty entirely. This new Flaanimal we showed at Philly is a bike we are extremely proud of. We’re advancing the core Flaanimal feature set by integrating creative solves for tire clearance, strength, and weight and we are not leaving behind the adaptability that the bike was originally about in the process. If you’d like to read the full exposition of what is new with Flaanimal 5 then head over to the exclusive preview that they have posted here.

Flaanimal 5 will be available Q1 2020. The bike we showed is just a preview and we are making final tweaks and locking specs as I type this. I couldn’t be more excited to show the final product when it is ready. 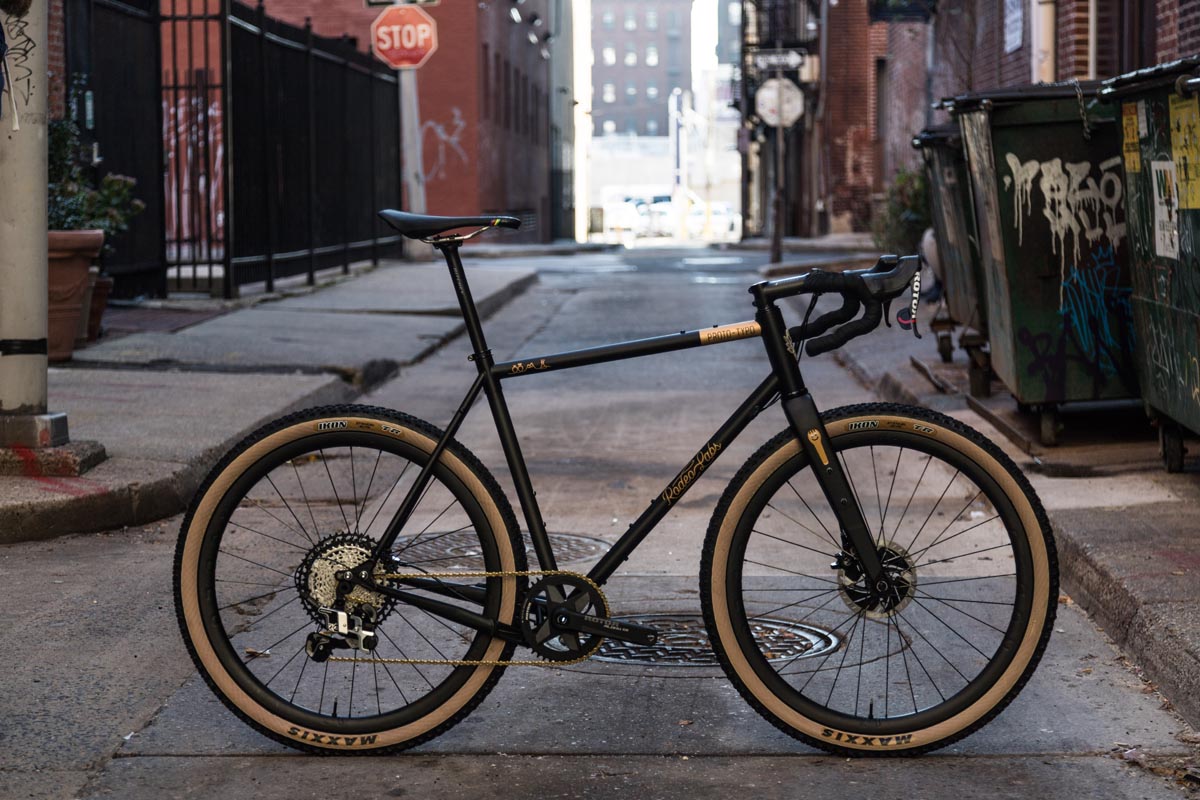 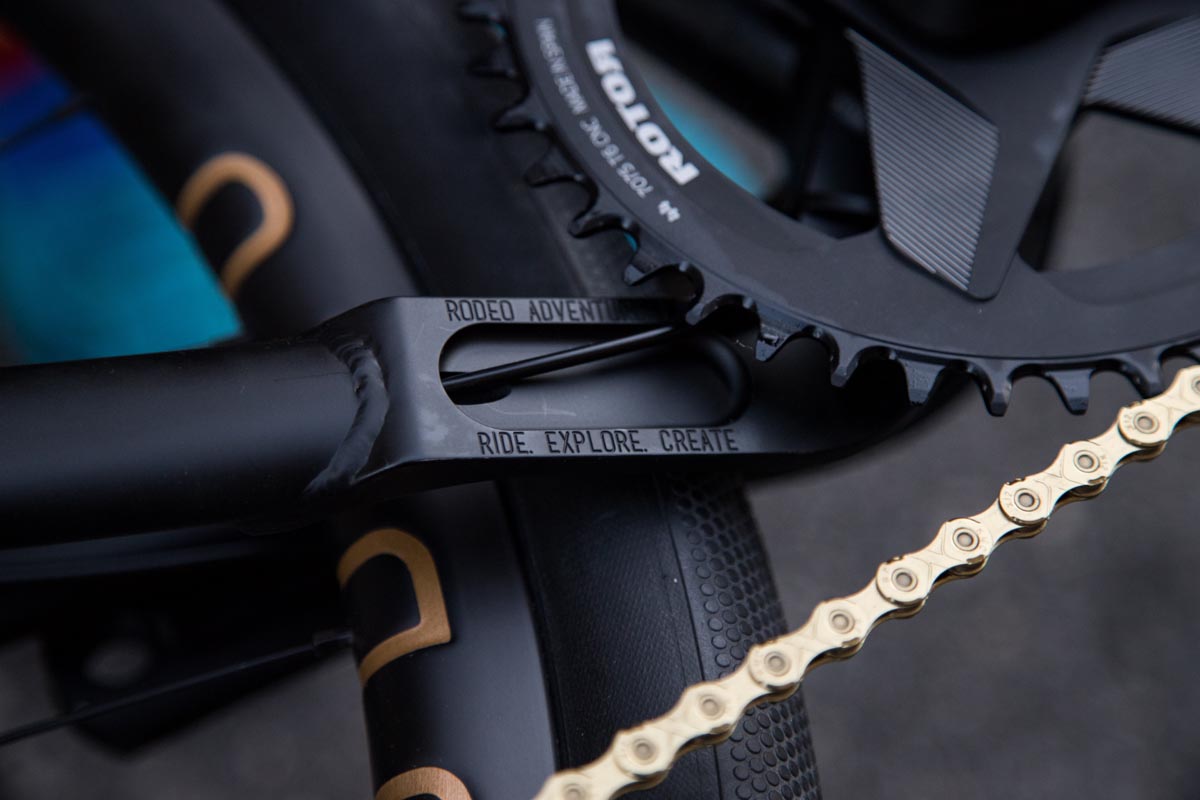 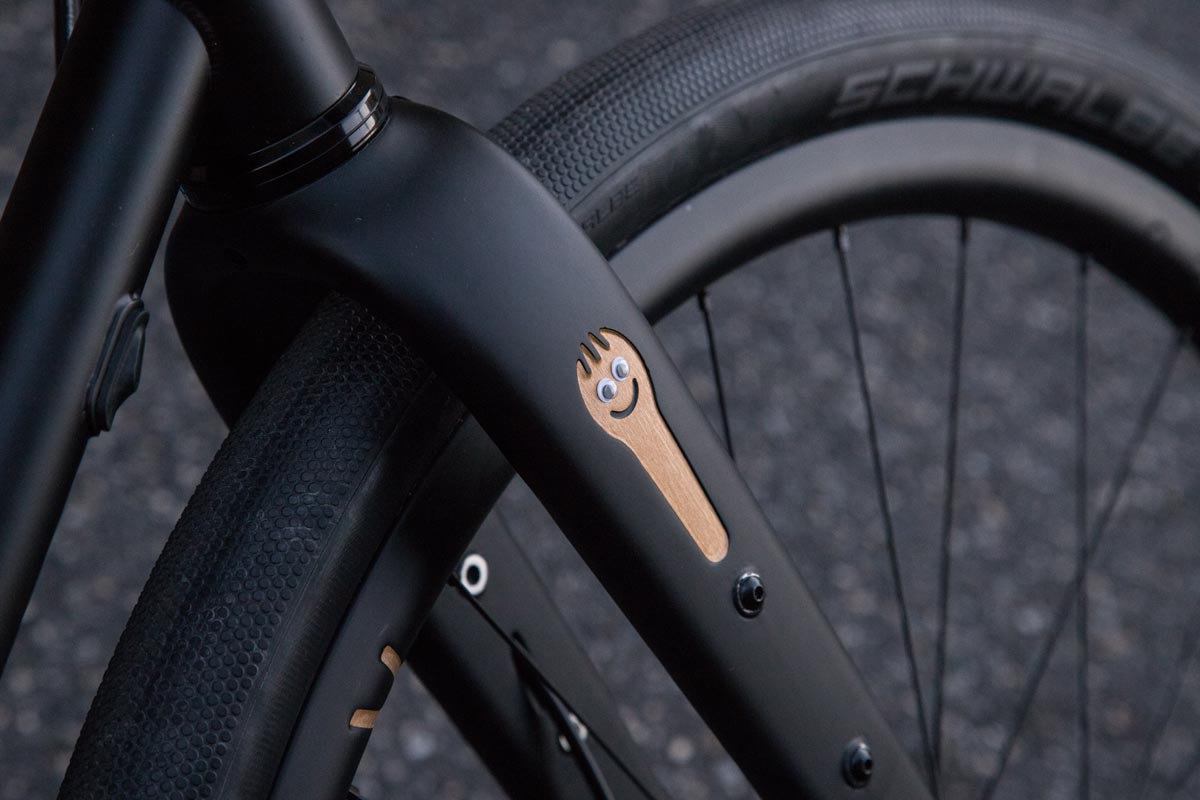 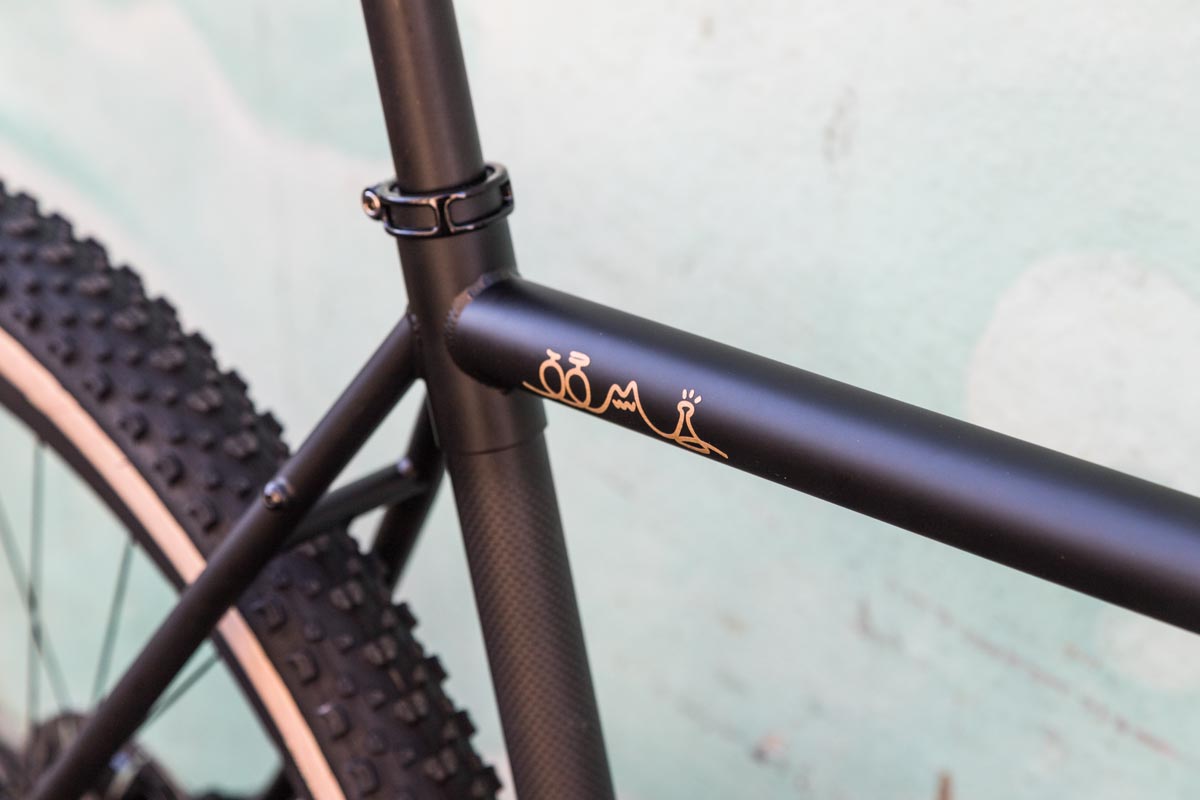 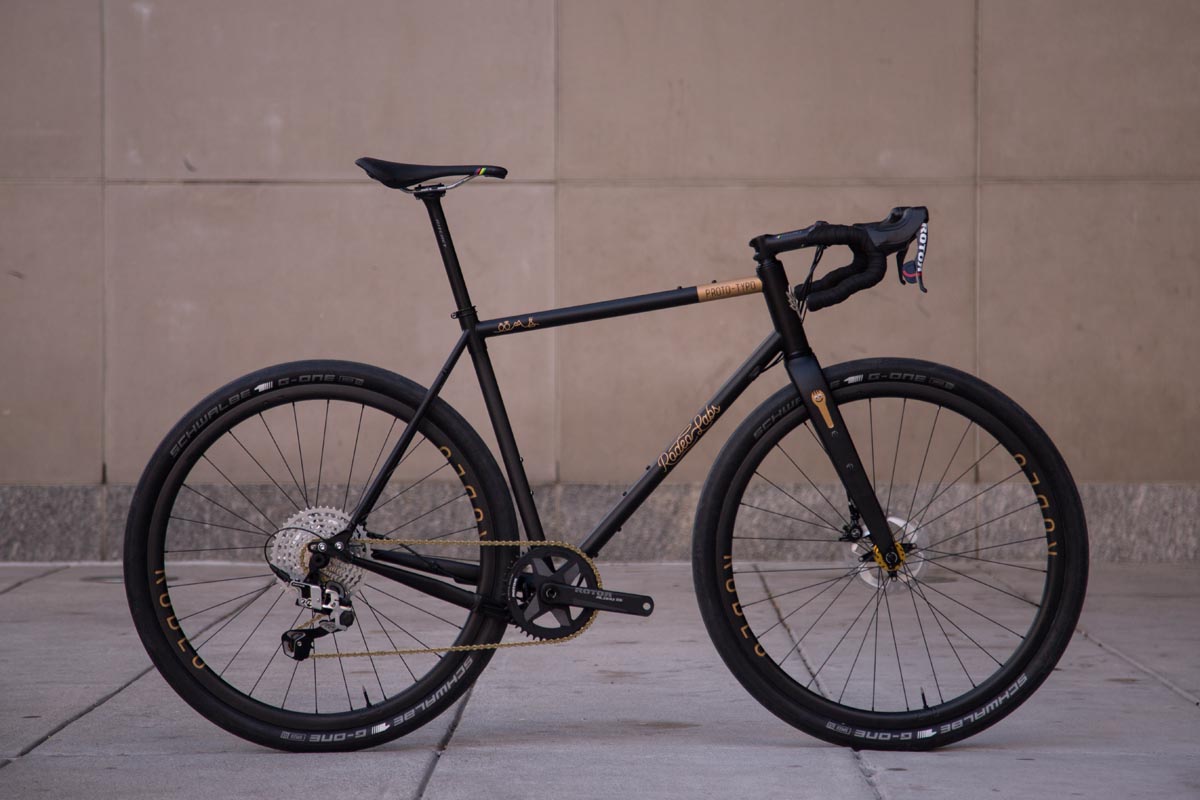 Thanks to all the people who came out and said hi at Philly Bike Expo. We loved visiting the city, shaking hands, talking bikes, meeting Rodeo owners, and sharing what we do. See you in 2020!

We’re expecting our 2019 Flaanimals to begin arriving in Denver the first week of May, so we thought that it would be a great time to post a gallery of this 2019 Flaamingo build that we brought to Sea Otter Classic for display at our booth.

The Flaamingo color has a tan main frame color so we thought it would be cool to accent the build with polished Ritchey Neo Classic and Shimano 105 components. Natural bar tape and saddle colors also flow nicely with the overall aesthetic.

A Flaanimal 4.1 can be built in the lower $3,000 range. As shown the build would climb another thousand or so with our 2.0 carbon 650b rims laced to pink anodized White Industries hubs and we now offer our 2.0 factory hubs in a similar shade of pink anno. 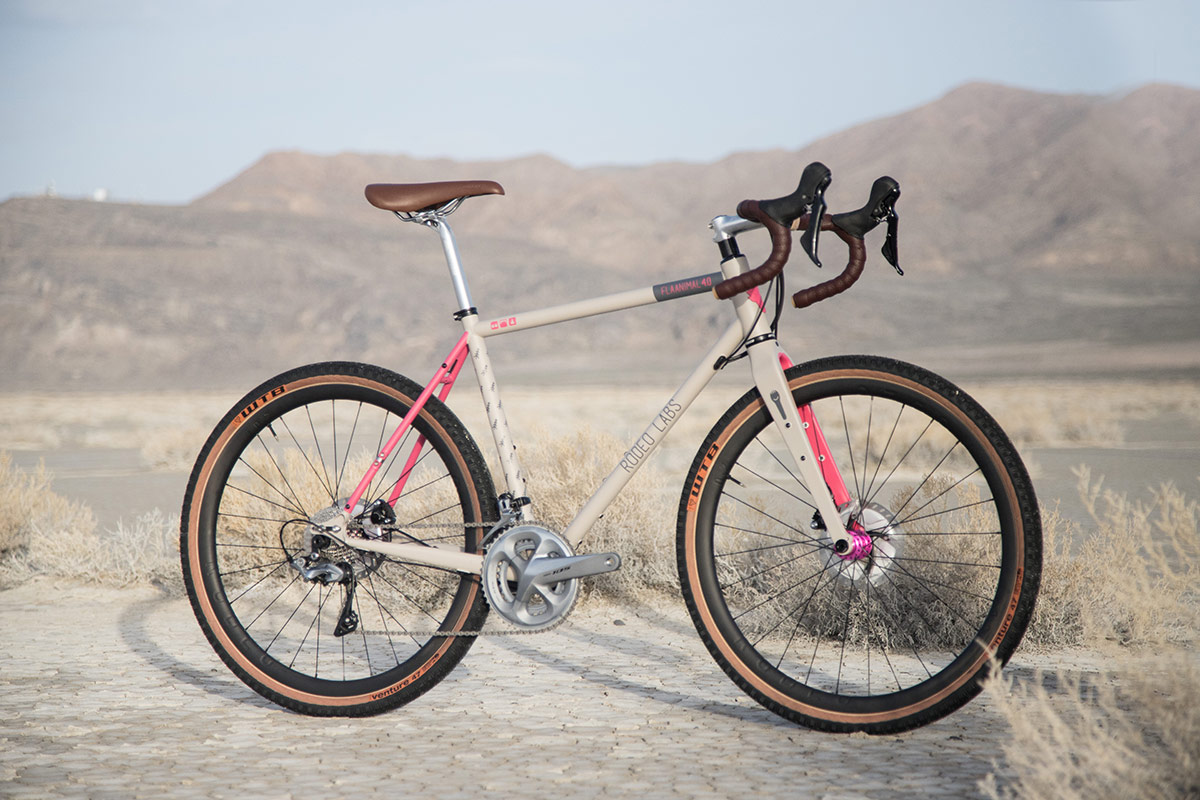 We shot this bike in the middle of the desert in Nevada on our way to Sea Otter. What better place to shoot a Khaki bike than in the desert? 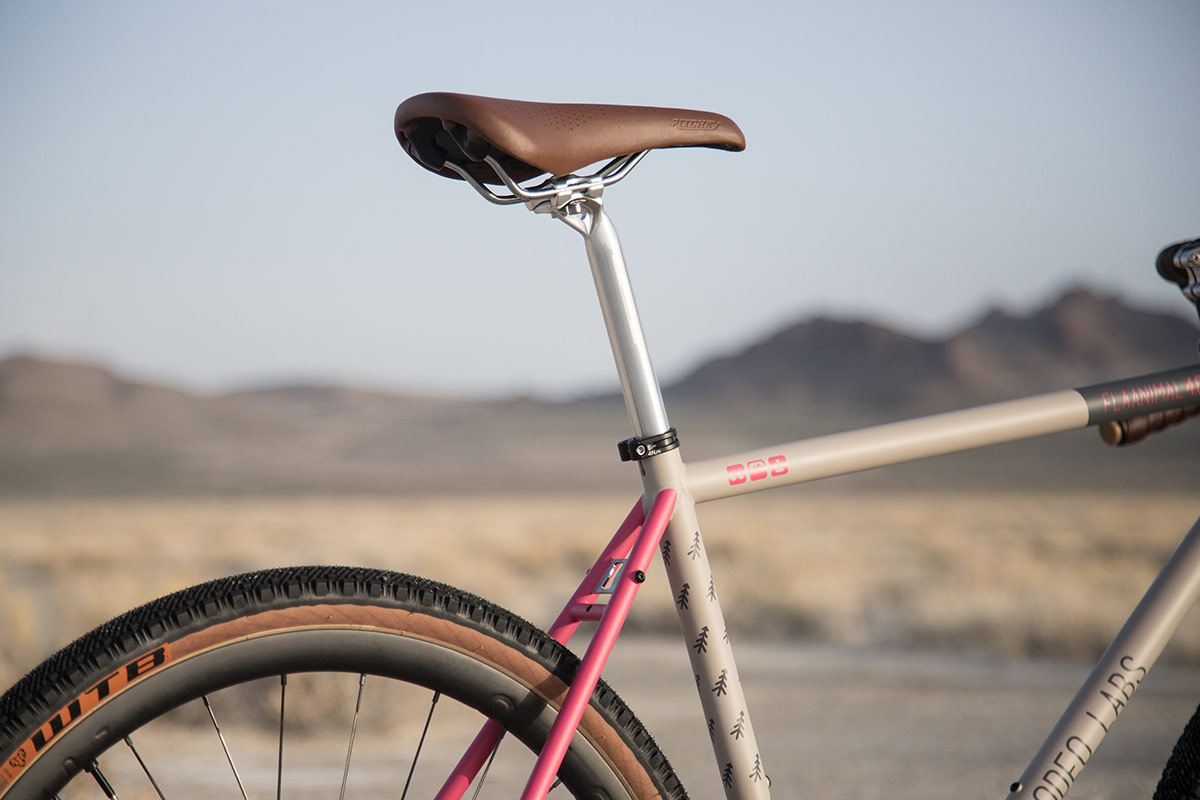 That Ritchey Classic saddle pairs so nicely with those WTB Venture 47mm 650b tires. 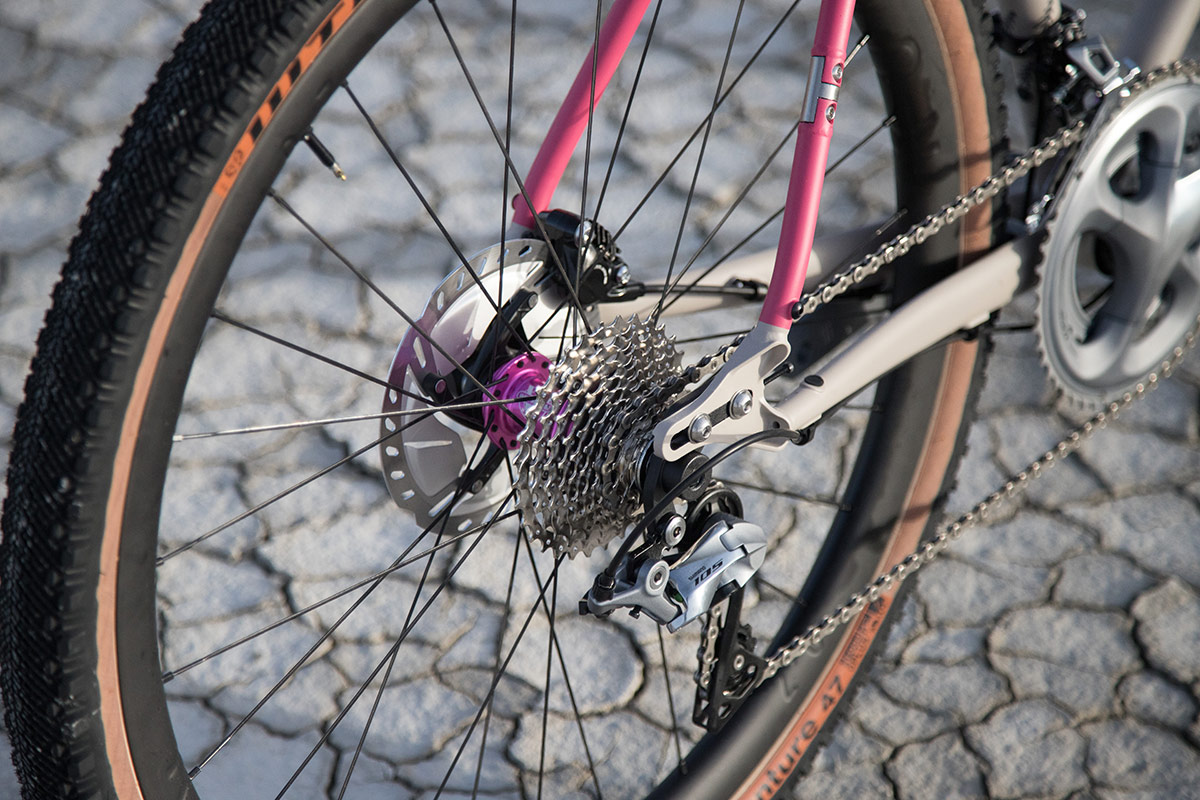 It is amazing how good Shimano 105 has gotten with this latest release. The shifter ergonomics are so excellent, and Shimano’s hydro brake feel is tops. 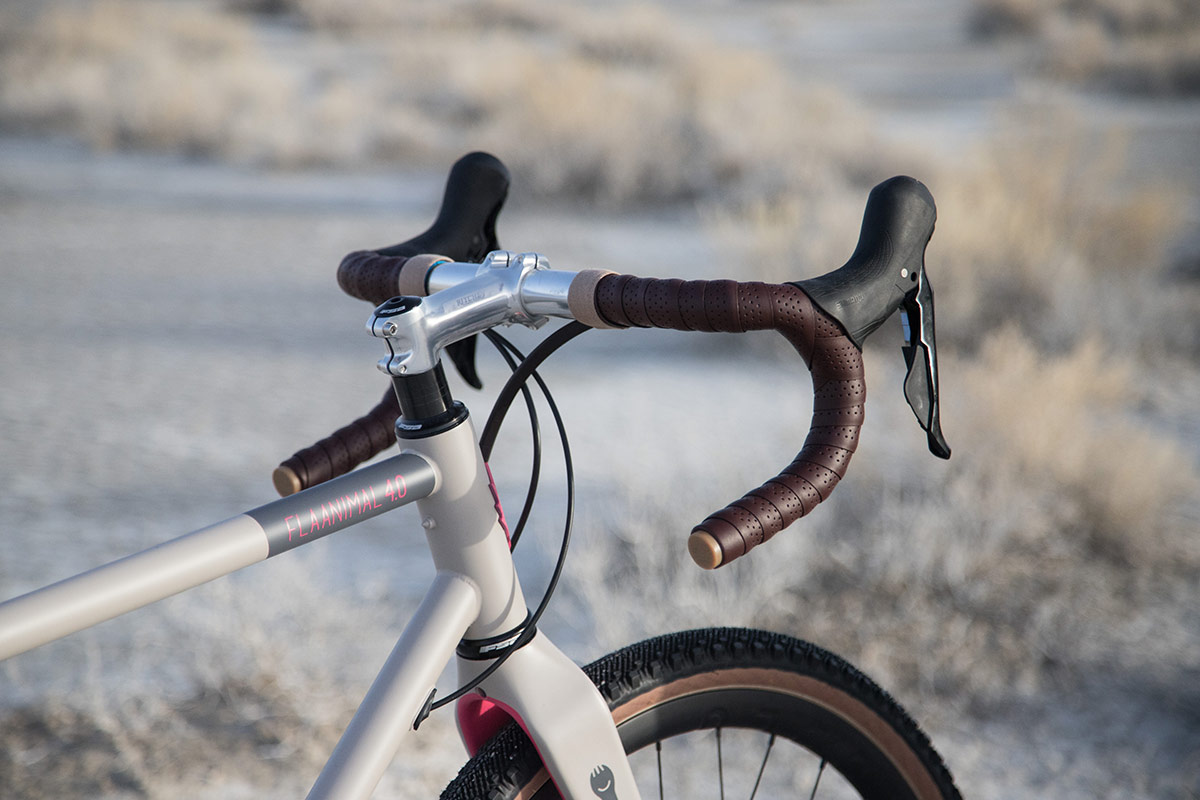 We see so many black parts on bikes these days, but three cheers for silver / polished if you want your bike to stand out from the crowd. 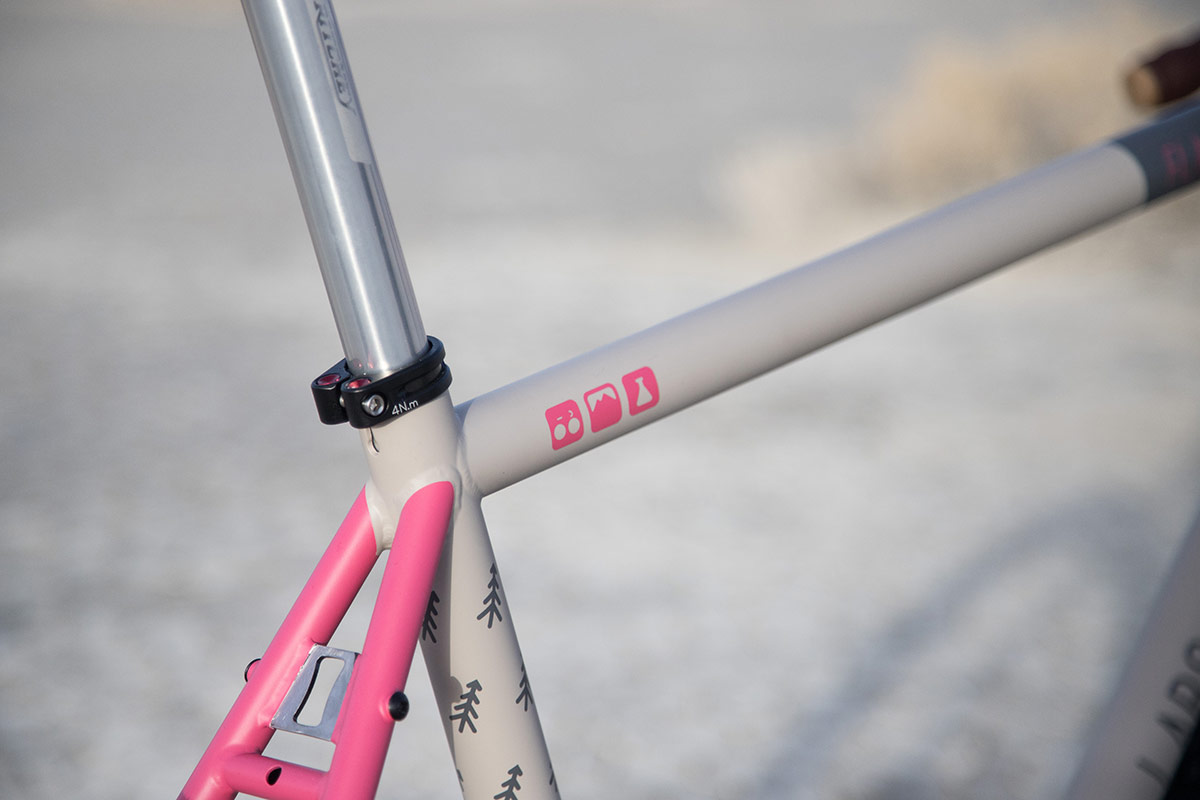 Our Ride. Explore. Create. icons are on the the top tube of every bike we make. 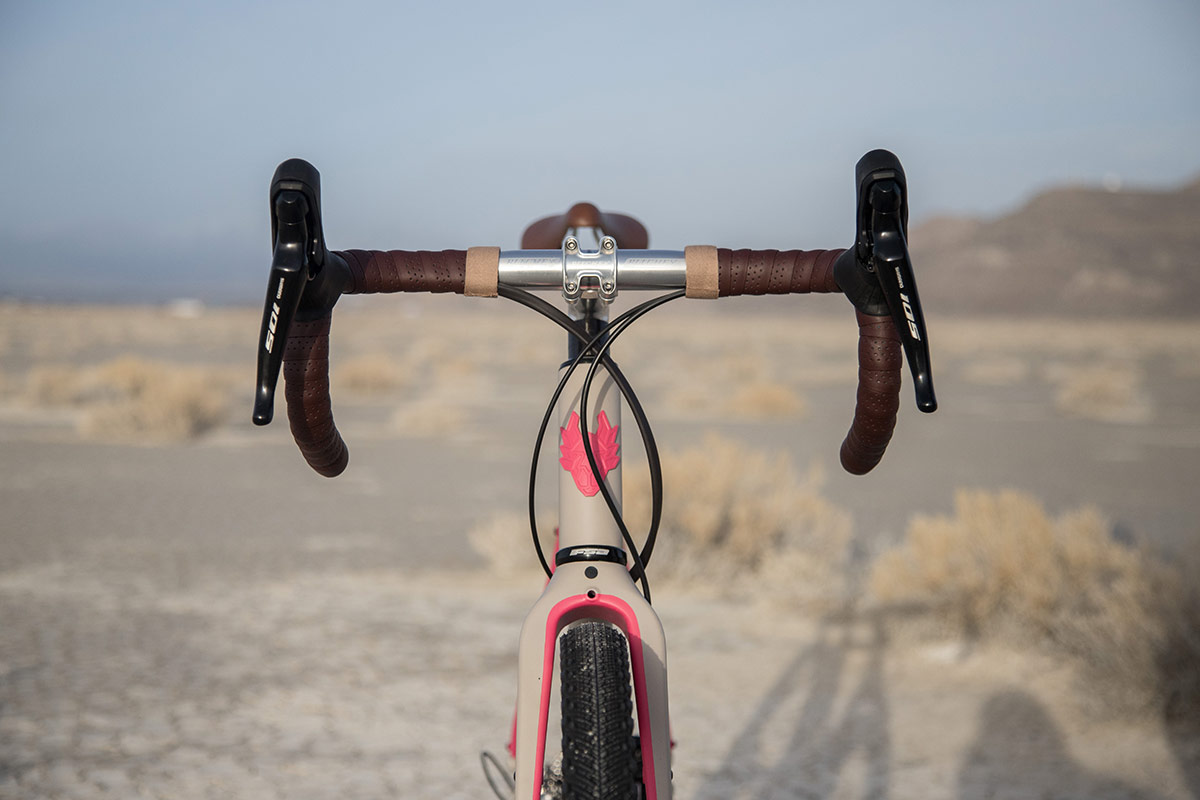 That’s a proper stance. Brooks bar tape has got to be the best looking tape out there and it feels and wears very nicely. 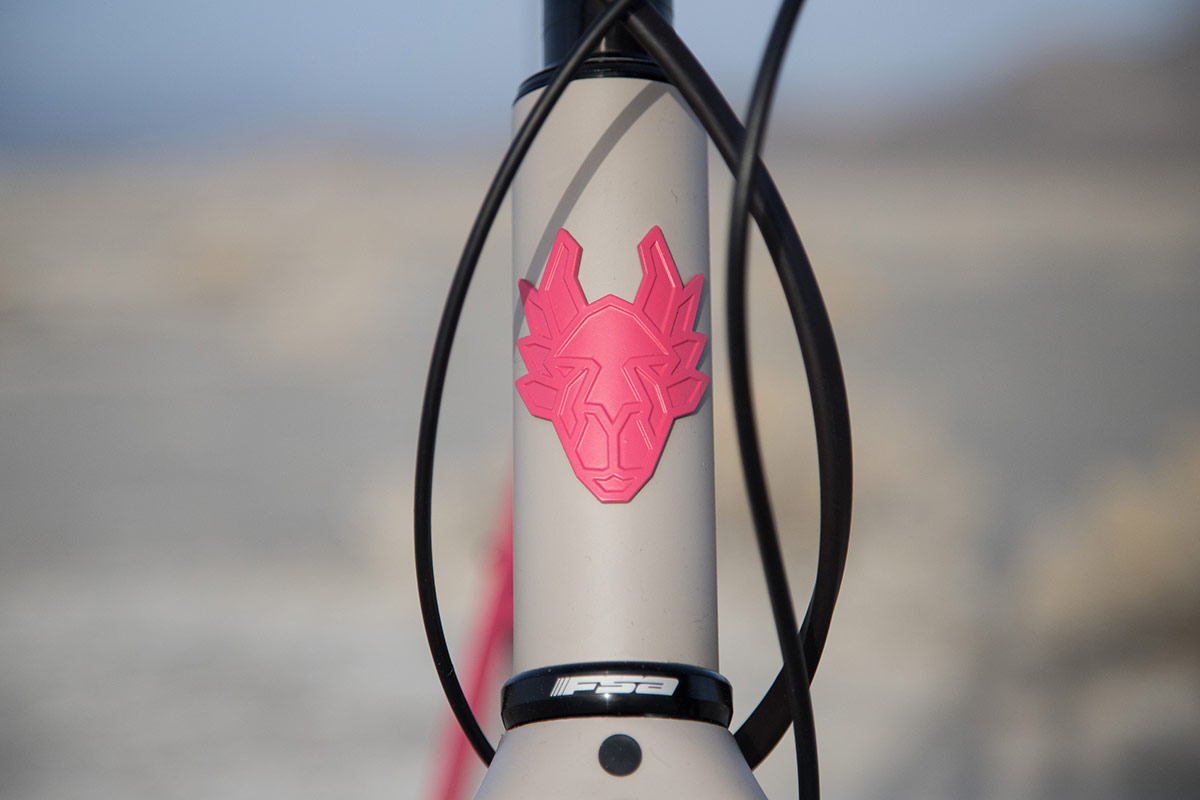 We went with solid painted head badges on our 2019 framesets to make them just a bit more in your face. This pink pops! 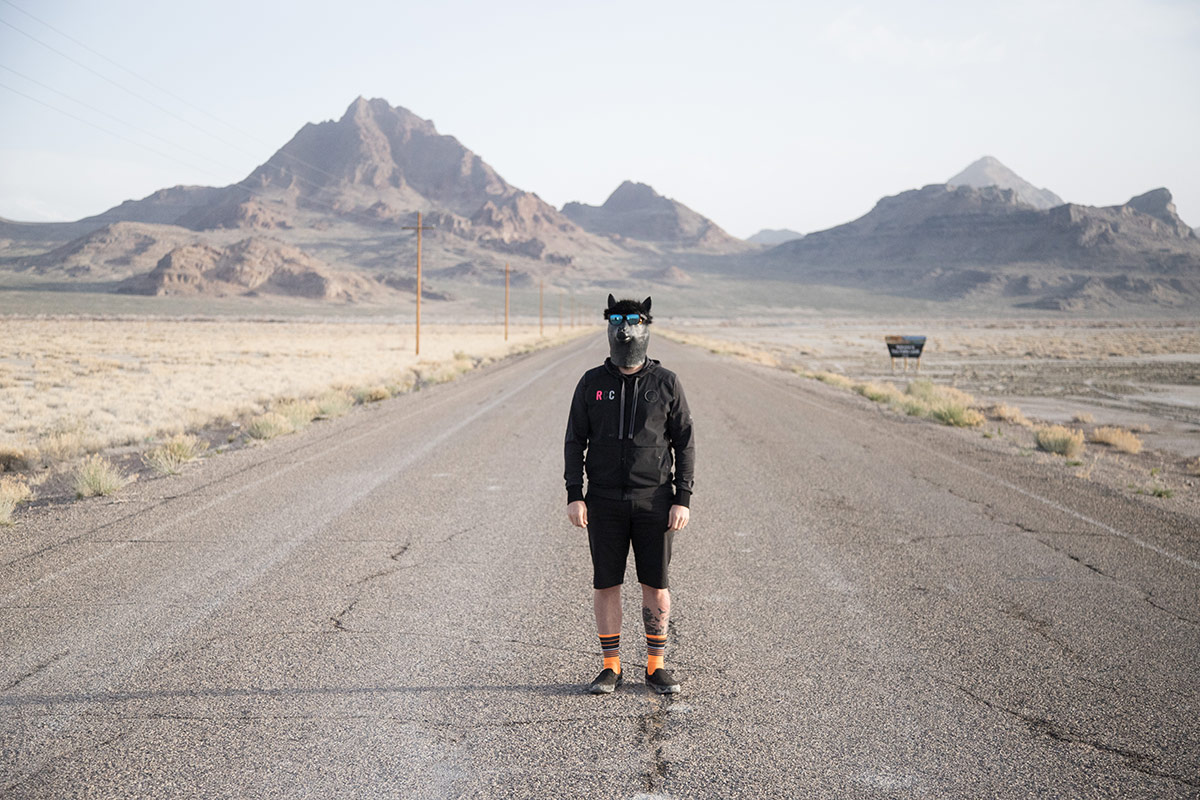 Flaanimal is a mythical winged alpaca AND a creepy dude standing in the middle of a desert road.

Every bike that leaves ends up being such a cool expression of it’s new owner. We don’t make the decisions for you. We ask you how you will ride the bike, we ask what your goals for the bike are, and we let your personalize as much as you’d like. This approach keeps us passionate about every bike that we build because each bike is built for a single person. Enjoy your new bike Joel!

The Merriam Webster dictionary defines absurd (ab·surd  \ əb-ˈsərd) as, ridiculously unreasonable, unsound, or incongruous. The summiting of Mount Antero on June 8th of this year, was absurd. That is why looking back on it I am happy to have done it.