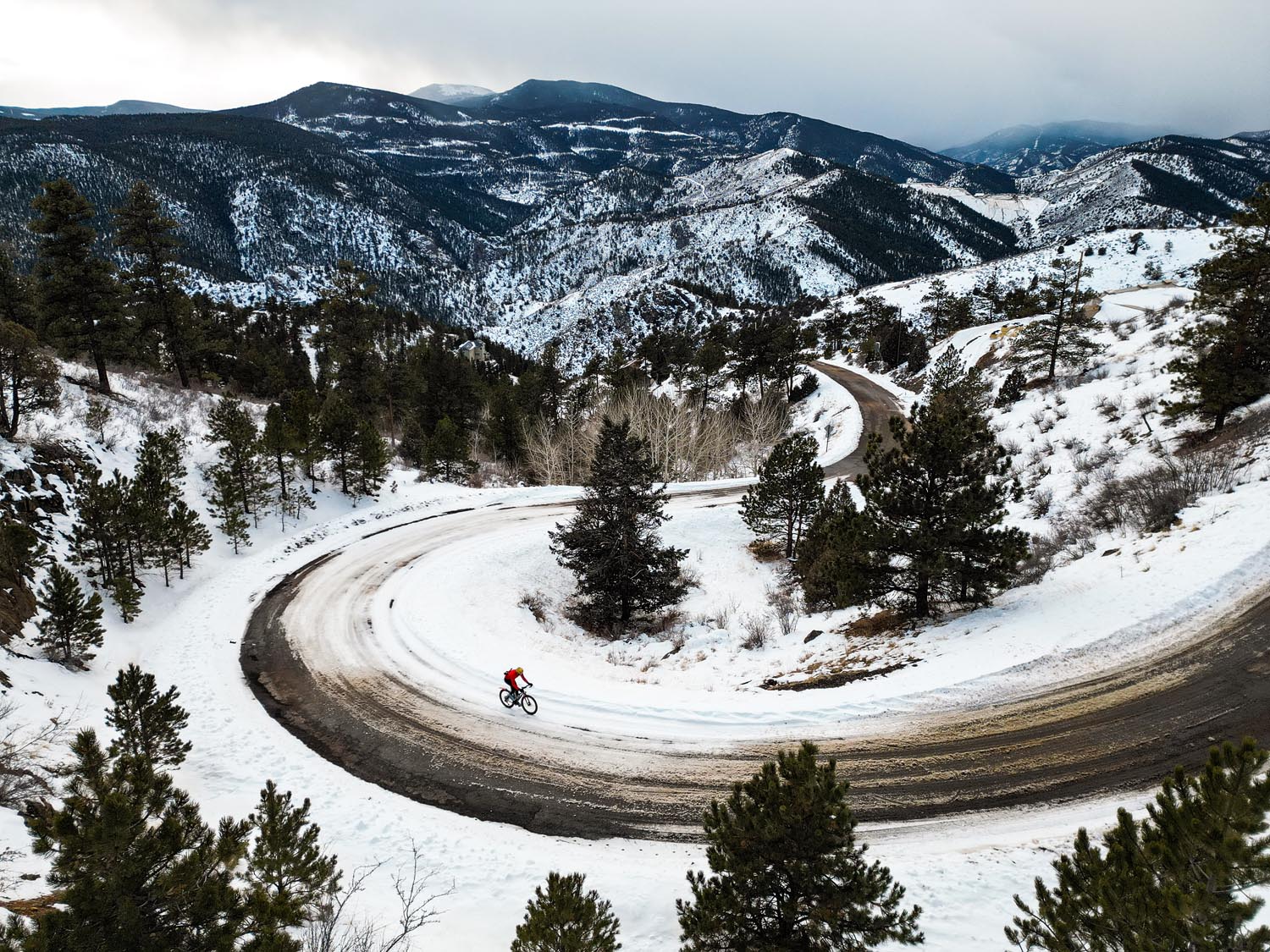 Into the hills, where I belong

Cyclists don’t belong in the mountains once the snow starts flying. Indeed, conditions down in Denver itself were so bad on Saturday that any idea of a final ride of the year, high or low, was Ill advised. But after a week of holiday time off the bike I was anxious for an impulsive visit to the well of inspiration that is The Rockies.

Note: I originally posted this to my Instagram feed, but Instagram has limitations. You may only display10 images per post, and you are constrained to a tiny phone screen. Instagram also falls short because there are many people who aren’t on that platform. So instead of only sharing this post with that community, I’m reposting these images and my thoughts here, in extended form.

For some people bike riding is primarily an athletic endeavor. For them fitness or speed or race results might be the priority. Or perhaps pushing personal physical and mental limits in the chief motivator. I can identify with all of those themes because I’ve moved through each of them over the decades that I’ve been a cyclist. In the early 2010s I started experimenting quite a bit more with taking my interest in photography with me on bike rides, and in a way that helped lead to the creation of Rodeo because photos helped build community, and community turned into this company.

Early on in those years I was still primarily surrounded by friends riding for speed and fitness, so when my rides started including pauses of 5, 10, 30 minutes at a time where I was stopped on the road taking photos, my friends took the chance to poke fun at me as they reviewed my rides on Strava.

“Wow, your Lookout Mountain ascent times have gotten so slow!”. They would say. I used to feel very self conscious about that, but not so much that it held me back. I experimented so much with cycling photography back then, it was such a fun time of discovery I took tens, and even hundreds of thousands of really awful cycling photos over the years, but along the way a few decent or even good photos started to appear on my camera as well. I was learning and growing, and it was thrilling to be doing so.

Over time taking cycling photos and even going on long, causal rides in the mountains has become more and more difficult to do as the demands of work and family have deservingly eaten into ride time. I’ve become more automatic, less inspired, and less curious. That saddens me to realize, because the original intent of Rodeo was never about selling bikes, it was simply about creativity and friendship.

Recently I’ve been looking at photo folders of years gone by and each batch of photos reminded me that I used to try harder to see, ride, and capture new things with my eyes, lungs, and a camera. I miss that other more motivated self.

So on Saturday, Dec 31st, New Year’s Eve, I pointed my bike towards the snowy mountains above Denver with two goals in my mind. The first was to experience the wonder of the mountains in a fresh way again, and the second was to try extra hard to capture that wonder with my camera.

“Cyclists don’t belong in the mountains in the winter”, etc etc. I fought back against that voice, and for my place on the shoulder, or in the worn snow rut. These hills are mine too, and I wanted to experience the rawness of their winter selves. So I put on my fattest tires, charge my blinking tail light, and made sure my dynamo headlight was angled to keep me visible to cars. A bright red jacket and yellow helmet, and brightly colored Flaanimal shared the work of making me easy to see, and hopefully hard to miss.

Slush, ice, narrow unplowed roads, and aggressive motorists were unwelcoming as I made my way stubbornly towards the canyons. Once the walls closed in and the gradient began climbing, things became more hostile still. What is it about hill people that makes them hate a gentle touch of their break pedal or subtle turn of their steering wheel in order to give a cyclist a safe margin? I was sprayed and drenched with slush repeatedly by traffic. Massive trucks downshifted to roll coal. Giant unwelcome letters in the form of soot.

Along the way I stopped and stashed my bike on the side of the road and pulled out my Fuji camera and my DJI drone. I flew the drone around soaking up the unique perspective like a bird. It’s such a thrill to see a canyon road from above. Down lower I tried to slow down and capture scenes on the side of the road. An ugly brewery isn’t only ugly, it can also look like an incredible space station. Dripping water can look like crystals falling from the sky. A frozen river feels a million years from summer. What winter takes in comfort it repays in beauty.

The plan was an out and back ride, only going deep into the hills enough to grab some images and retreat, but the canyon was gorgeous and my brain started drawing a new line on the map in my head. Golden gate, Robinson Hill, Clear Creek, Floyd Hill, Evergreen, Morrison, Home. Could I do it?

It was stupidly ambitious for a winter ride, but the conditions, unlike the motorists, were never outright hostile. Snowflakes flew, and cold blasts confronted, but they were bluffing.

I got the feeling that the mountains weren’t warning me away, they were just making me earn these vistas, and this memory.

I tried to capture the feeling with my camera, but these views can’t be shrunk to fit on glowing screens. In my head I can still feel these roads, peaks, and valleys, spiced with the thrill and fear of being there.

Cyclists belong in the mountains in any season, we just have to be stubborn enough to believe that we have a right to be there.

No matter how stale I feel about my riding or my photos, creativity is standing by, waiting to welcome me back if I just make the effort to try.