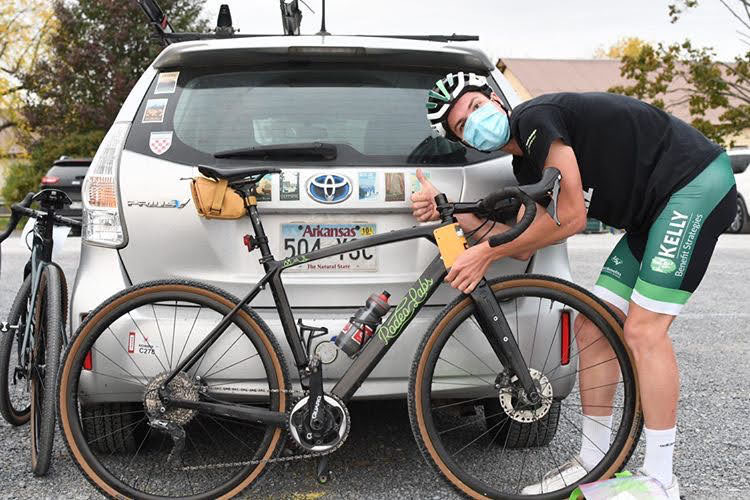 If life is, as Forrest Gump claims, like a box of chocolate, then 2020 is home to only the chocolate that nobody thinks they want. Yet, despite the funky, rancid, and downright rotten aspects of this year, this particular box of chocolates has some hidden gems. It may not have been the chocolate we had hoped for, but in some cases it has been chocolate I have truly cherished. Here are just a few of those chocolates:

Bike racing? Never heard of her.

Cyclist far and wide have spent 2020 siting, wishing, watching, and waiting for racing. This new new landscape of cycling, one where intentions are crafted anew and every rider’s motivation have been tossed, churned and been spat out, has been a reckoning for many with competitive ambition. Some, who rode because of racing, found the year insufferable. Others, who in the past have raced to authorize the time to ride, have relished in the flexibility and creativity necessitated by the pandemic.

Personally, and I know this may come as a shocker, am of the later persuasion and have reveled in the blank canvass a raceless season has allowed for. Yet, I know for many, it has been extremely trying to lose interest in cycling despite it being a time where we all are searching for the little things which retain a semblance of sanity. It has truly been sad to see. While it seems so simple to write off racing as unessential in a year where hundreds of thousands of Americans have died of a virus that gatherings accelerate and multiply, like everything in life there is room for a much more nuanced consideration. While road racing may be a dicier proposition, we in the gravel sphere have a bit more latitude, and possibly even a duty, to be the versatile gaggle of folks we strive to be and come up with some spicy solutions.

Entering into the year, UnPAved was truly the talk of the town when it comes to East Coast gravel. While the West and Midwest has seen a massive boon in. the gravel racing landscape, the East has regrettably lagged behind. Sure, we have the lovely coastal Croatan Buck-Fifty and some high-quality events in the Northeast, but compared to the other swaths of our country, we East Coasters are lacking in that signature event that matches those Western dirty odysseys. With its inaugural edition last year being a smash hit, 2020 was going to be the year where UnPAved entered the discussion as one of Americas flagship gravel events and prove that the East is a growing force in the gravel-laden sphere of bikes.

Come quarantine, as races one by one fell by the COVID caused wayside, my list of gravel races was getting crossed off. What had been a nice well-rounded list now was down two one, long off hold out: UnPAved. While the road scene tried to salvage some racing, I didn’t see the close quartered confines of a peloton appealing and so was left watching and waiting to see the status of the race that could be my one fleeting taste of that competitive energy, before heading into a winter where the longing for rubbing and racing is standard.

Without question, the organizers understood this tremendous opportunity to provide a day which could give many cyclist, from the weekender to the elite racer, that outlet we have all missed in a year where inside bike riding (I’m sorry but, barf) is the only competitive alternative. Where other races, given less time to pivot, decided to cut their losses and postpone a year, UnPAved took the risk and went forward with plans for something special.

Out was the large-scale festival of mass-start gravel; In was a small scaled, strava-esk pick your own adventure.

For the 200 riders who set out to tackle the course, the 125-mile mixed surface was the same as it would be in normal circumstances. Yet, that was where the similarities ended. Instead of the chaos of a grand depart that gravel racing has championed, all the riders set out whenever they pleased within a two-hour window. Additionally, the racing was spliced up into segments which incorporated the most vivid exhibitions of PA gravel goodness. The rest of the roads presented the chance to do as you pleased, all the while taking in the splendor of fall foliage that few places could even approach.

Thus, UnPAved somehow captured that communal aspect of all riders of all abilities sharing the same stage and retaining the safety that the year necessitated. Throughout the day as I careened around central Pennsylvania on my lonesome, I was constantly around a full spectrum of gravel-goers. Starting towards the end of our window – because a 9am start will always be “>” 7am, and you won’t change my mind on that – was a phenomenal chance to see the masses in all their glory.

Instead of going for the segments, which I have to say did not include ENOUGH of the fantastic course, I decided to take on the 200-kilometer course as a time trial which meant throughout the day I stumbled upon most of the field scattered over the track. While I did not start with everyone I came across, it almost made it more satisfying to find each of my fellow racers, riders, and revelers in various states of stoke over the course of the day. I saw the grit, I gave and got countless encouragements, and through it all was this undying enthusiasm that came with an event everyone could get behind and do in whatever manner they felt tickled their fancy. It was nothing short of a beautiful mosaic of cycle centric catharsis, playing out in a supremely beautiful autumnal theater.

While this year has only had a grand total of two races, UnPAved wholeheartedly deserves recognition of my race of the year. Even if the scoring left more to be desired with only two-and a half-hours of the seven and a half hour day counted, the model was one that gave all who started the satisfaction – the satiation – we all had been so dearly missing. With the limited sample size, it’s easy to discount a superlative like race of the year as meaningless. However, the fact that the race happened at all AND somehow managed to provide the competition and community that makes any race worth doing is exceptional. Not only that, but to construct a course with the climbs, the leaves, the speed, and the chunder – oh my sweet chunder – has made UnPAved a truly phenomenal event. Thank you UnPAved, we all needed you.