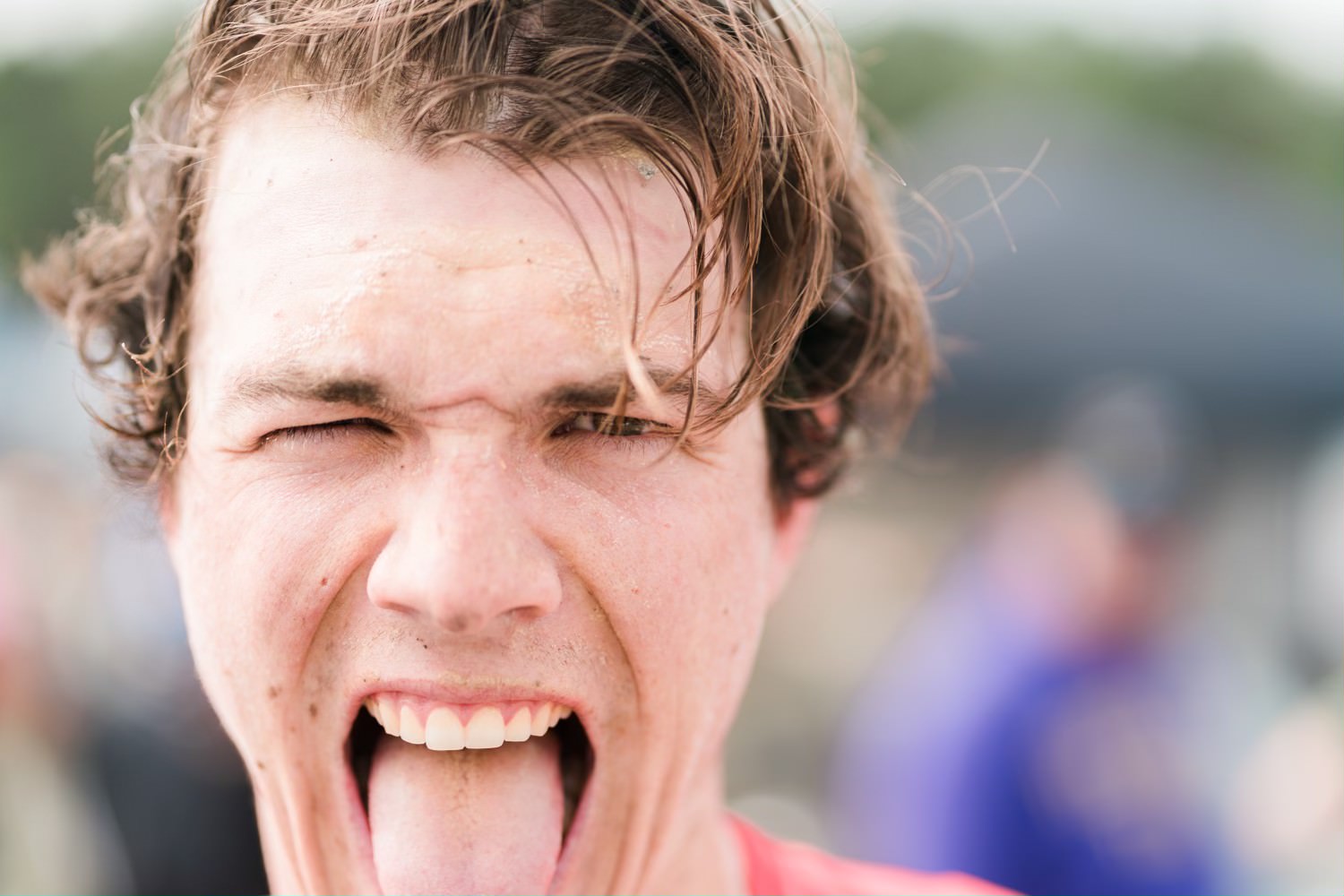 The last couple weeks I have been surfing. You know, the proper radical stuff. You know, getting stoked.

“You just drop in, smack the lip… Waapah! Just drop down… Swoopah! And then after that, you just drop in, ride the barrel, and get pitted, so pitted.” – Surfer Guy, 2012

That’s it — that has been me. Minus the ocean, and the water, and the surfboard, and the crazy Californian energy. Nonetheless, there have been waves, I have been riding, and I have been getting pitted. So pitted.

Now, this might seem like a ticky tacky metaphorical distinction, ripped off from some pacifist hippy handbook. And while it is a nice peaceful alternative in this time of international war, I am just trying to be accurate.In gravel racing, there will always be a flow. Every event, in every country, for all abilities, has a grain of optimization. Not optimization in terms of top results, necessarily. More so, optimization in terms of experience. The right cocktail of misadventure and competence: of ambition and desperation; of success and struggle. What makes gravel great is that everyone feels the full array of ebbs and flows, and we all find time to win and lose.

The Mid South is one of those things you need to see to believe. The photographs are fantastic, but there is undoubtedly a surreal quality to it. How can Oklahoma, in early March, possibly be any fun at all?

In my case, the absurdity of Oklahoma was so much more pronounced, compared to the vibrance of Italy a week before. When I told those who asked that I was going to Italy and Oklahoma for spring break, the contrast of the facial reaction – a roller coaster of wanderlust and disgust – challenged my own stoke on the dichotomy. Nonetheless, all those haters obviously do not know The Mid South and the power of authentic enthusiasm. Enthusiasm that is most easily found in Bobby “Unlearnpavement” Wintle, but enthusiasm that spreads far beyond the sparky entertainers speeches, hugs and celebrations.

More on that web later.

For the first 60 miles I was on it. It was one of those rides where I felt like I was floating. The 15 hours of late-winter plane travel the day before didn’t matter. The trans-Atlantic flight three days prior seemed like it never even happened. The well-below-freezing start was irrelevant. Crazy synergy like this seems to happen when excitement pairs with preparation, and with each mile the excitement was building.

Swoopah — splashdown. In an instant, I went from riding that oh so powerful swell with some of the most powerful privateers in the country to a prompt dust-filled end. Sailing through the air, in the terrifying slow motion that you only get when in free fall, I knew the ghost was gone. When I landed, I felt my shoulder slip out of place and the wind leave my chest. I soldiered on for a bit, not ready to leave the gravel surf. It’s the duty of a cyclist to get up, we are not soccer players afterall. But, that was not my day, and I was surfing not fighting. My wave had crashed and it was time for me to get out of the tide. The countdown for my next go around had just started.

Nevertheless, my experience with that Mid South enthusiasm was just starting. Enter: The Jeepers.

Nothing at The Mid South is as extraordinary as the fleet of support jeeps that keep the show on the road. Beyond the rescue missions are pairs of drivers and navigators. These jeepers — yes, that is the technical term they like to use —  are in many ways as dedicated and excited as the riders they help. Rovering, mudding, and plotting their way around the Stillwater area, the Jeepers are one of the things that make this race inescapably Oklahoma, and unquestionably great. No two groups of people can seem further apart, yet take so much from each other.

It’s enthusiasm that feeds enthusiasm. In total, I got three rides from the Jeepers, in three different vehicles, on three different days. Over those hours, a few that were spent going out of their way to take a college kid to and from the airport in Oklahoma City, we talked about mountains, politics, religion — all the things conventional wisdom would tell an Eastern ‘city slicker’ to avoid. But the result was as beautiful and unexpected as the lands we passed by.

People are never quite as far apart, even in the most polarized places.

While The Mid South is one of the “monuments” of gravel, Croatan is one of the renegade newbies. Away from the gravel heartlands of the Midwest, West and Vermont, Croatan is gravel’s beach spring break. With Matt Hawkings, Mr. Ridge Supply himself, at the helm, Croton is a funky, colorful celebration of cycling far from where one expects it.

Competitively, the field of the 150-mile Croatan Buck-Fifty is much smaller than that of its Red Mud counterpart. Nonetheless, Ian Boswell, Logan Kasper and Jeremiah Bishop (to name a few) chose it to begin their gravel calendars. Fire power is in no short supply.

One last quirk of the Buck Fifty is the course. Since the race centers around the Croatan National Forest, it is restricted to the limited number of roads built in the coastal swaths of spindly pines and scattered lakes. Additionally, it is as flat as a pool table – 400 feet of elevation gain is all the multiple laps can muster in the 150 miles of riding. Nevertheless, riders can’t get lulled into thinking their day will be easy as the oppressive early season sun and humidity, mud-bogs, and interminable headwinds suck the naive dry.

The Buck-Fifty is not to be trifled with.

Like the week before, the race started beautifully. Excitement emanated from everywhere. The weather was pristine, the crew was rowdy, and the mud was thick in the now infamous sector four. Come mile seventy and it was me and 8 riders left at the front. Then…

Waapah — smacked down once again. With less gusto as the week before, but with ground contact nonetheless. With gravel, it is always something, innit?

This time I was able to bounce up and dust myself off. We were heading through the mud tracks of “Sector 4” and in the slow speed chaos, a root caught my wheel and I tumbled. After wrenching a stick from my rear mech. At the halfway point 5 miles later, I was back with the leaders, only to lose my chain twice from my loose clutch hastily undone in the post-crash frenzy. Another lesson in surfing instead of fighting.

For the next four hours, I returned to familiar spaces in both place and spirit. For better or for worse, multiple 75-mile laps of the same course makes the final portion of any race a known quantity. In that knowledge time flows in waves, speeding along and slowing up in tidal shifts. Everytime I find myself here – which is proving to be quite often as my newbie mistakes often leave me chasing the coat-tails of the highest echelons of these races – I relish the chance to ride these waves of emotion more.

These times spent alone, in small groups, and in fleeting moments with others deep in their own sets of emotional swells, is something I have come to love. There is a beautiful fluidity between communalism and individuality. All of it being dragged along by the same enduring desire of personal growth and achievement. Everyone is being pushed back from the same forces of climate, geography and time that make the growth and achievement worth something.

In the end, I was swept back into competition. A group of two feisty lads came up to me with 20-miles to go and the malaise of the last hours melted away. In its place, the brinkmanship, testosterone and pride that started it all returned. It was the last of the waves I needed to ride.

On our way back to the track that houses the start and finish, a cheeky move on the pavement following some convincing acting on my competitors’ part gave him the seventh position. Ten seconds later, I came across eighth. Even in defeat, it was a beautiful way to end a beautiful day. In both of my races, I tried my best not to fight against the different tides. The Mid South, in the chaotic tides of the Oklahoma plains, I got pitted. So pitted. In the beachside sands of the Croatan Buck Fifty, I smacked that lip, dropped down, and rode the barrel.

It is best to surf these waves.