Mt. Evans Chill Climb. A look back a year later. 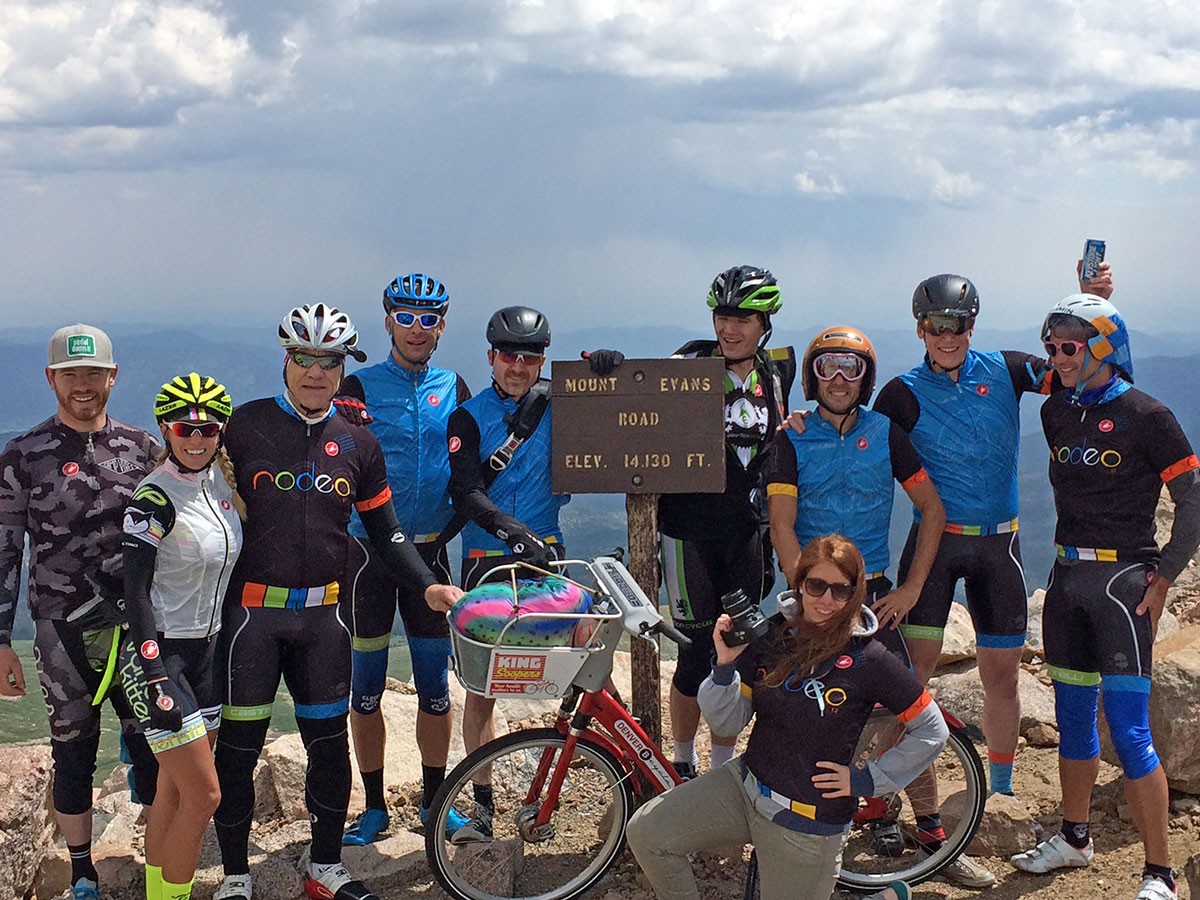 Mt. Evans Chill Climb: August 9, 2014 One Year Anniversary It was one of those mornings when your alarm goes off and it takes a few blinks to realize that although it feels as if your soul has been separate from your body for the last eight hours, you’re indeed still alive. And your covers are really warm so you don’t want to move. And you’re a bit annoyed and momentarily confused as to why you’ve been woken up when the sun clearly has not. Is that the moon? Yeah, definitely annoyed. But as your mind catches up to the best of your body, a smirk finds its way to your face as you remember why you’re awake before the rest of the world; it’s the morning of the Mt. Evans Chill Climb. 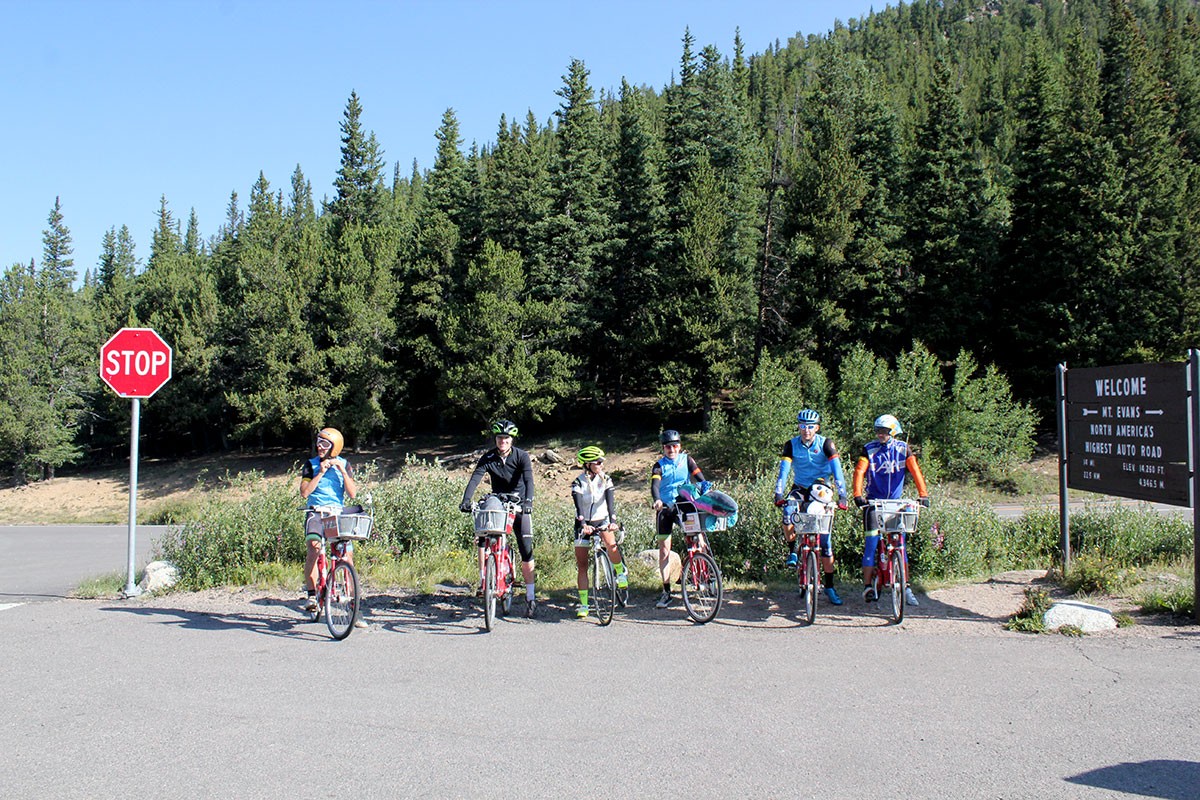 We departed Denver at a time when an eerie gray tint was cast over us, a time when color and life were yet to join us. I don’t think I talked much on the drive up to the mountain. Besides the fact my vocal chords weren’t warmed up, my mind was too preoccupied taking inventory of the items I brought along, wondering if I had enough warm gear for the mysterious adventure that lie ahead of me. It was summer so you wouldn’t think it would be too difficult to pick something to wear but we were in Colorado, and furthermore, we were going to be climbing to 14,000 feet in just a few hours. A combination of these two factors meant I could be fine wearing shorts at one moment, but I could be reaching for my snow gear the next. To give my worrying mind a break I concluded I would be fine in what I brought and if not, I would just have to tough it out. 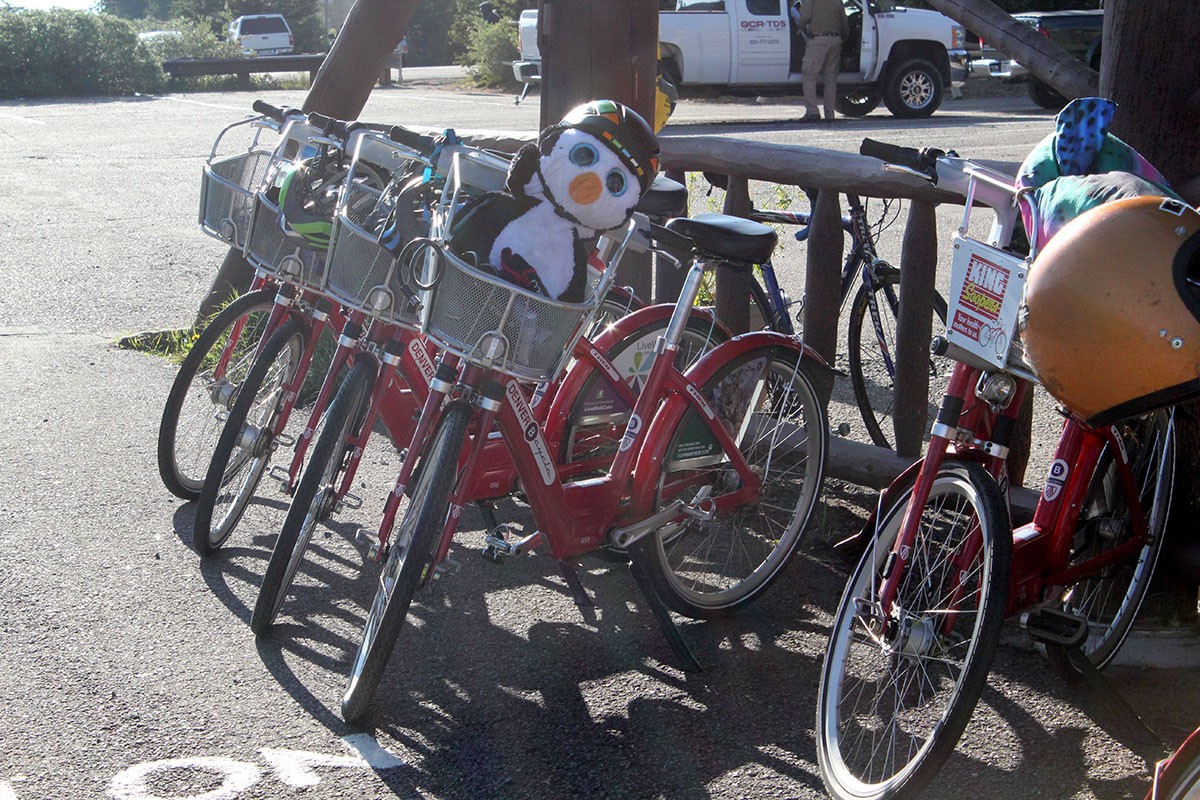 By the time we reached the lodge at the base of the mountain, the sun had risen over the plains to the east, and as it rose it brought the warmth of the day with it. We made it, we were there, what next? Eventually others began to trickle into the parking lot around us. Everyone was quiet. Quiet, nervous, and excited. A sort of electricity ran between us. An unspoken yet obvious camaraderie. We weren’t there to hike the 14er, and as the guys began filling their massive bike baskets with cans of beer and stuffed animals it was obvious we weren’t there to partake in a normal day of cycling either. Any standard attempt at summiting a 14,000 foot mountain would transpire on a nice light road bike, sans stuffed animals. These guys decided to face the challenge by riding to the top on City of Denver B-Cycle’s. These modes of transportation were heavy, had drum brakes, and were completely unconventional for such a climb. A formula for destruction for the faint of heart, but the means of existence to Rodeo Adventure Labs. 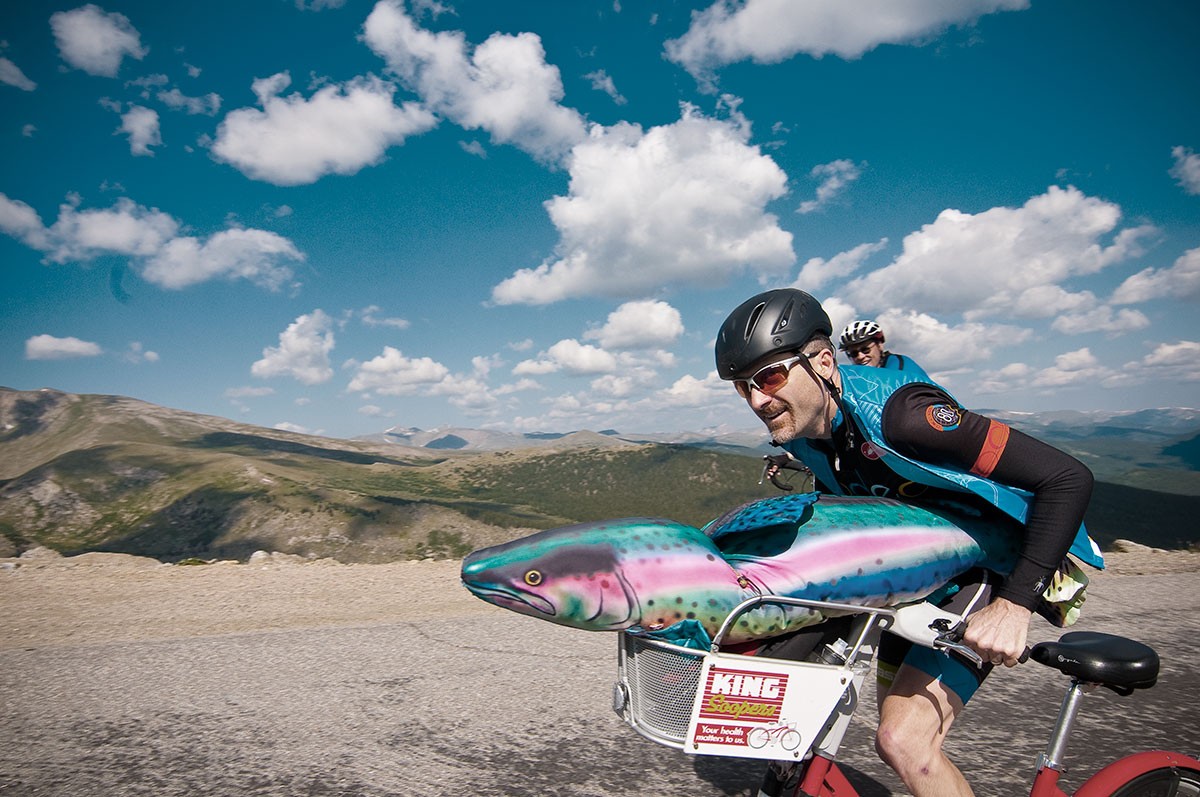 After a carb loaded breakfast and mediocre coffee at the lodge, we saddled up to start the historical trek. My role was to take photo, video and to ride along with the cyclists in the support car incase anything went awry. As I was jumping into the driver’s seat of the car, one of the motorcyclists asked if I wanted to ride along with him instead. An image flew through my mind of a professional photographer hanging off the back of a motorcycle, snapping photos of the best cyclists in the world as his driver flies him over cobblestone roads. Needless to say I took him up on his offer as soon as I checked back into reality. I probably wasn’t as graceful or professional looking as the photographer I had pictured in my mind, but it still ended up being one of the most thrilling experiences of my life. 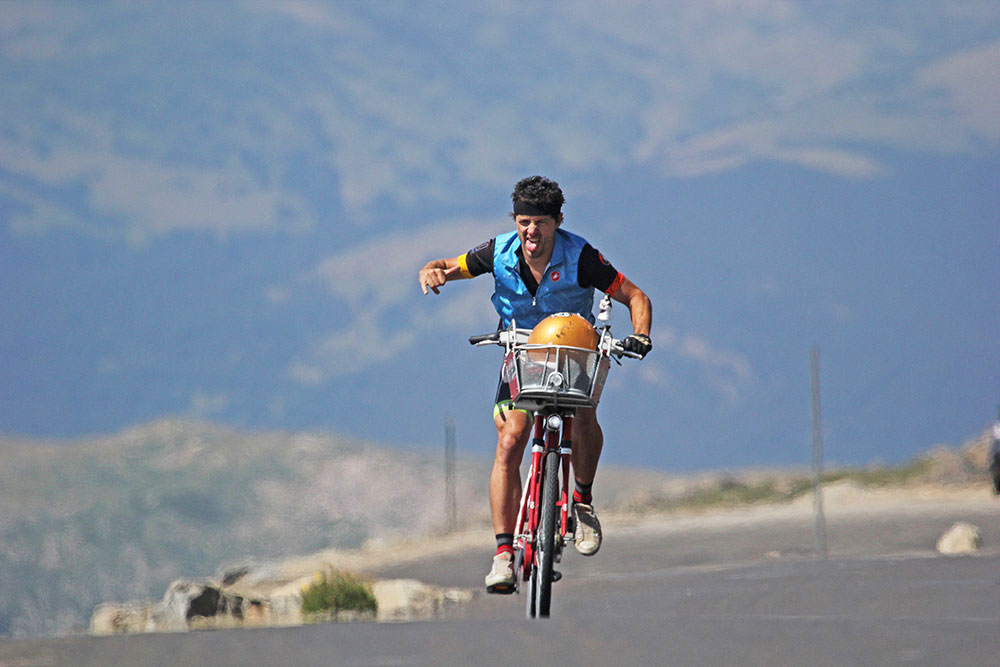 I got more comfortable on the motorcycle and with the driver the higher we climbed. It only took a few seconds of smashing the front of my helmet into the back of his to realize I needed to brace myself during gear shifts. I began taking photos without holding on to the body in front of me and I learned to jump off the back quickly in order to catch the perfect shot. And I only fell off the motorcycle once — we were parked — but no need to go on about that. I was able to capture some beautiful photos that were inspired by the snowcapped mountains and breathtaking views that surrounded us. Compiling epic material was a significant part of the day, but what made it all worthwhile was seeing the guys truly enjoy their ride. Although it was probably one of their more difficult physical achievements, they never failed to have a smile on their face or a word of encouragement for a struggling teammate. They radiated joy and their excitement grew as they neared the summit. I’m pretty sure I even saw the herd of mountain goats cheering them on, eager to join in themselves. 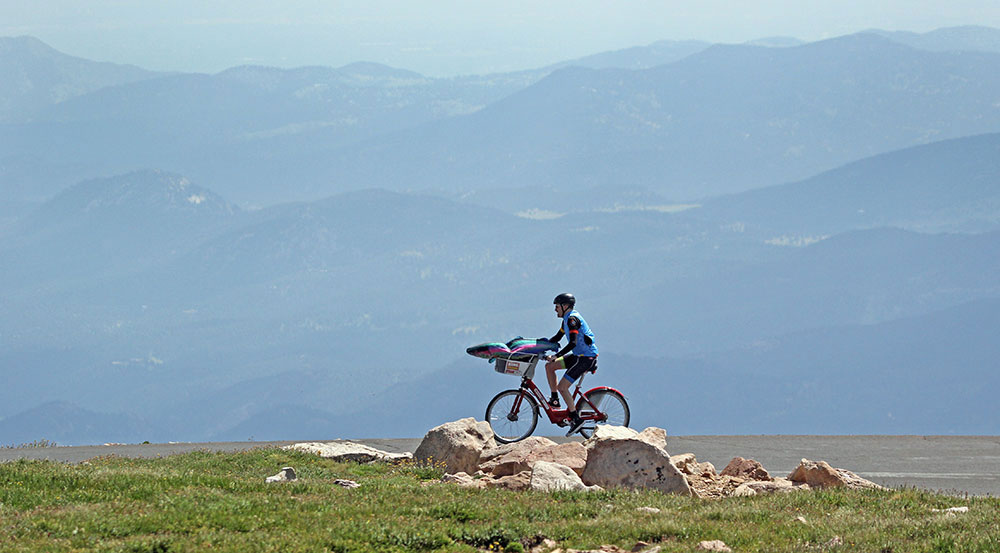 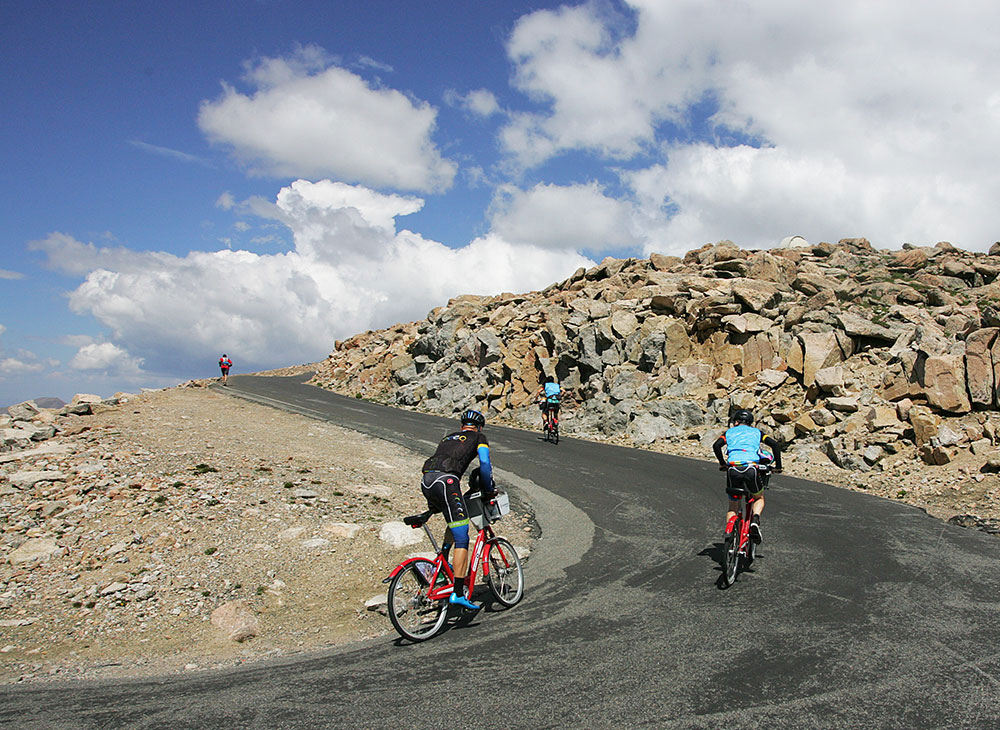 A celebration broke out when the last cyclist peddled with the remainder of his strength to join the rest of the guys at the summit of Mt. Evans. Beers were consumed, high fives were given, and a sense of pride filled the hearts of everyone involved. As I looked out over the Rocky Mountains, which were so vast it seemed as if I was looking at a painting, I realized just how special it had been to be part of this historical event. The sense for adventure, thinking outside the box, and shooting for the unconventional is what fueled the passion for this ride to take place, and that is what Rodeo Adventure Labs is all about. The things that stretch us are what allow us to enjoy life that much more. 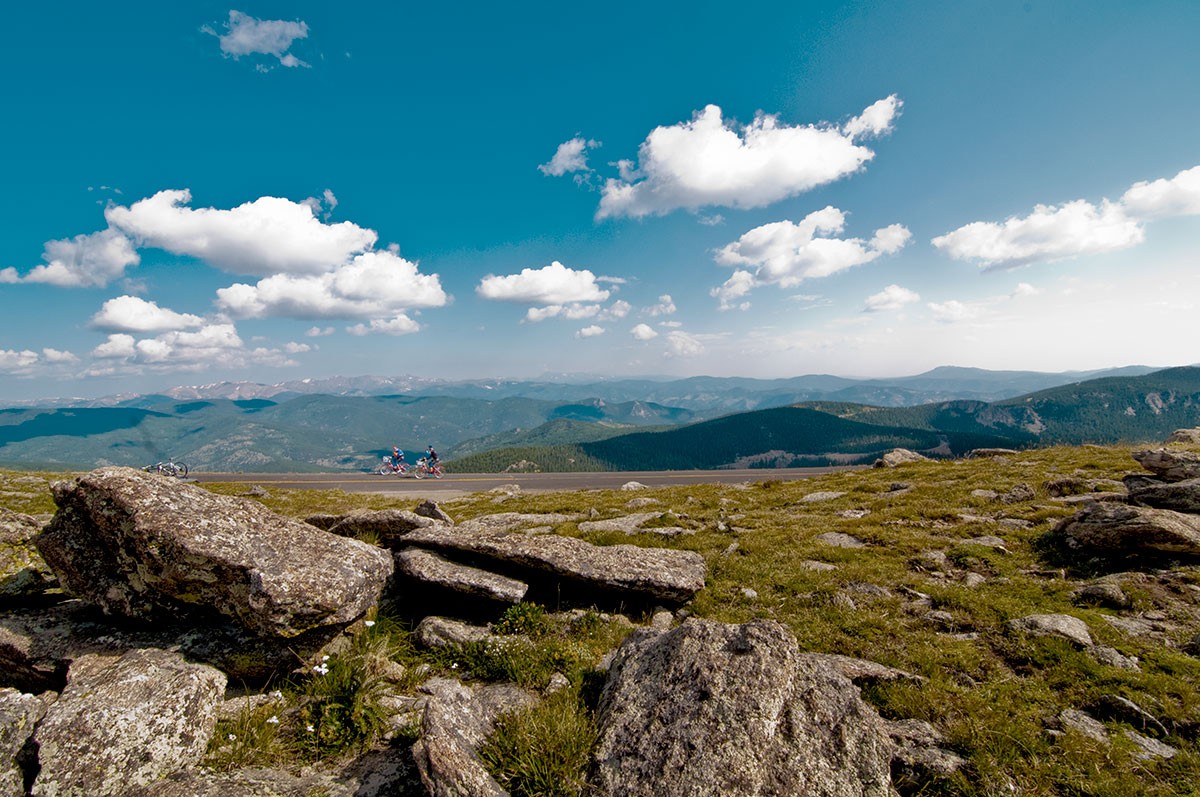 I took in one last breath of crisp mountain air and with frozen fingers climbed onto the back of the motorcycle to begin the long decent back to reality. And that’s when I realized…yeah, I should have packed warmer clothes. 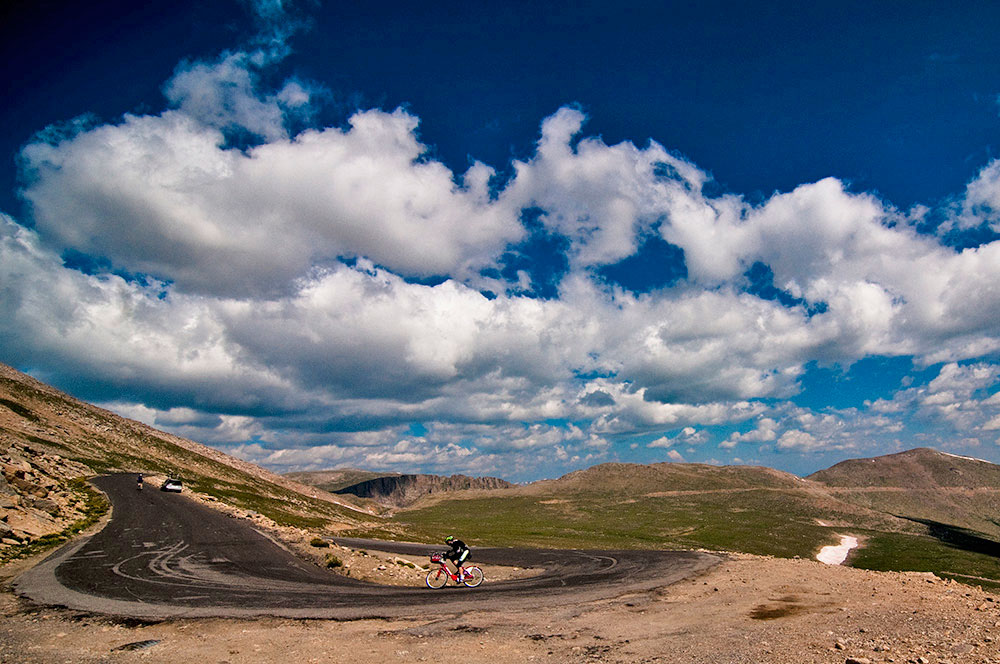