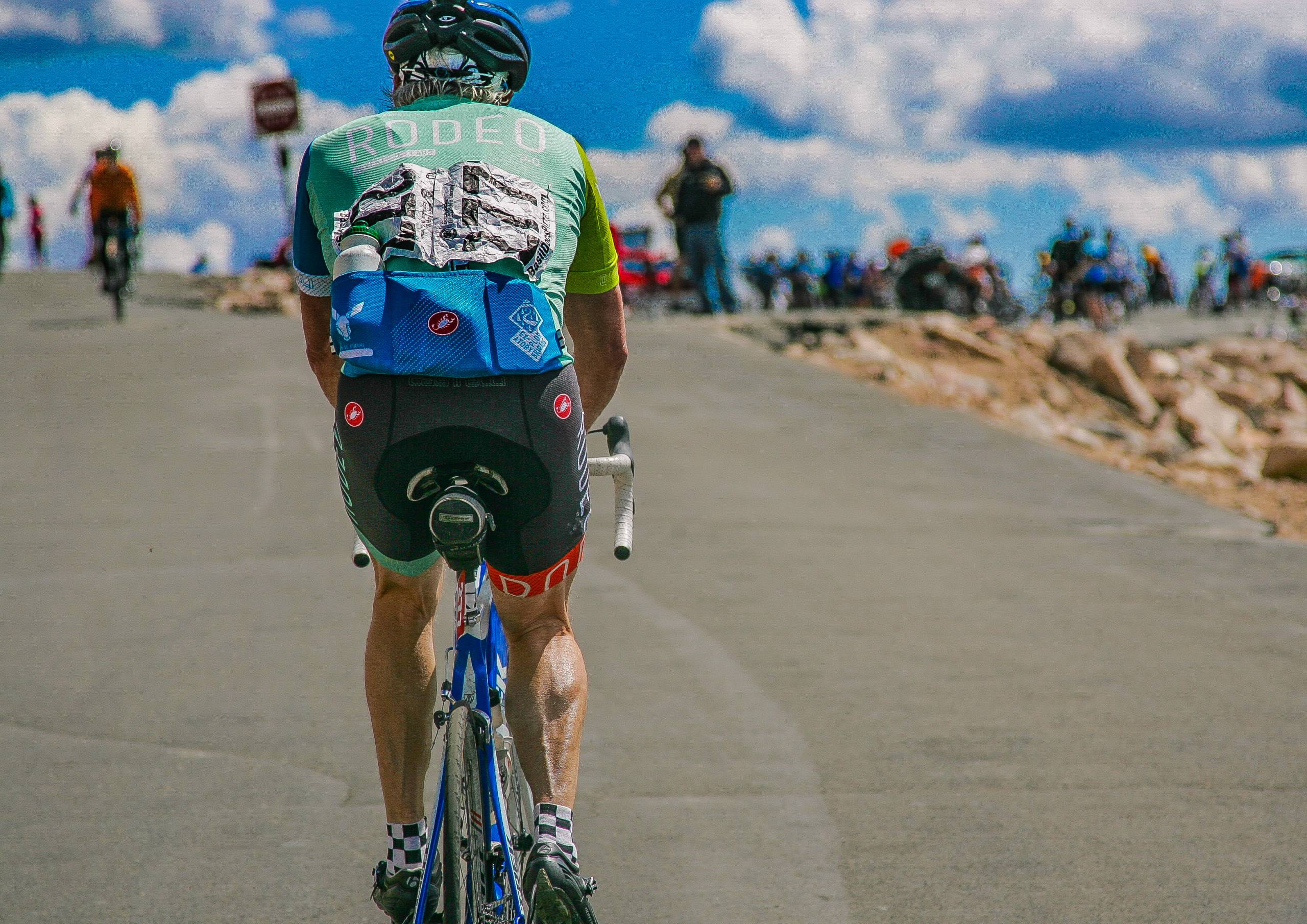 The Five Stages of the Mount Evans Hill Climb

Ten years ago, when I was newer to Colorado, I naively signed up for the Mount Evans Hill Climb. I drove the course a few weeks before the race, having no idea what I was getting into. My body betrayed me with an ill-timed cold, which doubled as a convenient reason to bail on the race.

I chalked it up to the cold, but really I was just scared – of the elevation gain, the altitude, the exposure.

Most every summer since then, as the date of Mount Evans approached, I would think really hard about lining up in Idaho Springs, but could never bring myself to do it. Timing, travel, or total lack of training always seemed to be ready excuses.

Until this year, 10 days before the race, when – thanks in part to some encouragement from the Rodeo crew – I finally peer pressured myself into signing up for the 28 mile ascent of the highest paved road in North America.

I made it to the start line this time. And tried to weather the various mental stages of such a singular challenge.

You know you’re in denial when, seconds after registering you text your buddy: “holy s**t.” And then you text your wife, “What have I done?”

You think you’re not ready. You think that every ache or pain might be a muscle or joint eager to pave an off ramp for you to bail out.

You try talking yourself into thinking that maybe it might not be that bad, that it can’t be that hard, that it’s not that steep. Then you remember that it’s 28 miles of up. That it’s 7,000 feet of climbing. And that there’s maybe half as much oxygen at the top.

You try to ignore the fact that you haven’t put in as many miles as you would’ve liked this year, or done as much climbing as would be preferred.

You don’t think this is happening, even when you wake up for a race day waffle and coffee.

You don’t think you’re actually doing this race, even when you’re picking up Geoff and Patrick and loading up bikes and gear.

You go blank when you park the car and get into the pre-race rituals of port-a-pot lines and pinning numbers.

This isn’t really happening. Is it?

Within minutes of rolling with the rest of the Cat 5’s, you’re instantly annoyed at the too-high pace.

Why is the group all stretched out instead of working together? Why are those guys hammering so hard at the front? Why is your heart rate spiking two miles into the race? Why didn’t you warm up more? Or at all?

So you decide to back off the pace and try not to blow up in the first third of the climb.

You unhitch from the group. And suddenly you are alone, much too soon, much too low on the climb, and much too much headwind with which to contend.

The shrapnel of your starting wave goes by – one or two or four riders at a time. You know you could hold their wheels, but you are scared of the second half of the climb.

You bargain with yourself and acknowledge that even though you’re riding solo, you’re at your own pace, and avoiding burning too many matches too early in the climb.

You feel pretty good as you ascend toward Echo Lake. You realize that you’re going to reach it in under 90 minutes, and that puts breaking the 3 hour mark in reach – a loose goal you had in mind for no particular reason.

You find yourself in a groove, with singular focus and the pedals turning without struggle. You wonder if this is actually going well.

You see Kevin go by you, with two other riders. You know he started in the wave behind you, five minutes down, and you’re not sure if it’s a good sign or not that it’s taken him until now to catch you.

You think the bargain is working, trading company in for self-determined pace. You go a little harder on the shallower stuff where you feel stronger, and ease back on steeper grades where you tend to struggle.

You start doing the math again, as you creep closer to treeline. You’re bad at math, but the 3 hour mark isn’t as likely as you once thought.

Somewhere above 12,000 feet, your brain goes into the fog of altitude. You feel the pang of a headache, and everything starts to slow down.

You think you’ve been drinking enough. But have you?

You switched out your near-empty bottles at the feed station for a bottle of water and a bottle of whatever electrolyte drink they had. You realize you have hardly had any of the latter, as it makes your stomach slosh and ache.

You start to worry about bonking, and your own weird thoughts creep up from the back of your mind to the front.

Why the hell are you doing this? Why aren’t you still in bed? Or out to brunch, like a normal person?

Why didn’t you commit to this sooner, so you could train properly?

Why did you even sign up for this in the first place?

Why can’t you go just a little bit faster?

Because you’re not good enough.

You didn’t put the work in.

You are not a climber.

You are above tree line. This is very much happening.

You gape at the views, but not for too long. Slim margins for error up here.

As you close in on Summit Lake, you pass long lines of riders, strewn out from previous start waves, mostly from the Gran Fondo.

You have a few handfuls of energy chews, which helps burn off the fog of altitude. You force yourself to drink more.

You get to the lake and feel some sense of relief. When the road pitches up, after the left hand bend, a group of three catches and immediately drops you.

Patrick is with them, out of the saddle. Patrick’s wave started 50 minutes after yours.

After they’re clear, you accelerate slightly only to feel the sting of cramps in your left calf. Then your right quad.

You back off and resume the steady pace. Around a tight left hand switchback, you lift your pace again. Again cramps.

You have two miles to go.

You try to do the math. You cannot.

You accept the grind. You stay just under the precarious threshold of cramping.

This strategy works. Nice and steady.

Until the “1km to go” sign appears, and you – who are bad at math – are out of the saddle. You are going harder than you should, harder than you need to. There is nothing to gain. What are you doing?

The sign says 500 meters to go. You are out of the saddle again. Your legs ache, but not like normal. Something sharper. You do not listen. Because you are an idiot.

You see a herd of mountain goats on the inside bend of the last turn. They are unimpressed.

You are fifty feet from the finish. Your legs stop – both calves, both quads, completely seized up.

This has never happened before.

You lose all momentum. You think you’re going to tip over. You turn the pedals just enough to get there.

You finished in 3 hours and 14 minutes.

You are at the top, with all the other mountain goats, real and figurative.

Thank you to Reid Neureiter for sharing some of his photos.

Click here to check out his full gallery from the Mount Evans Hill Climb.