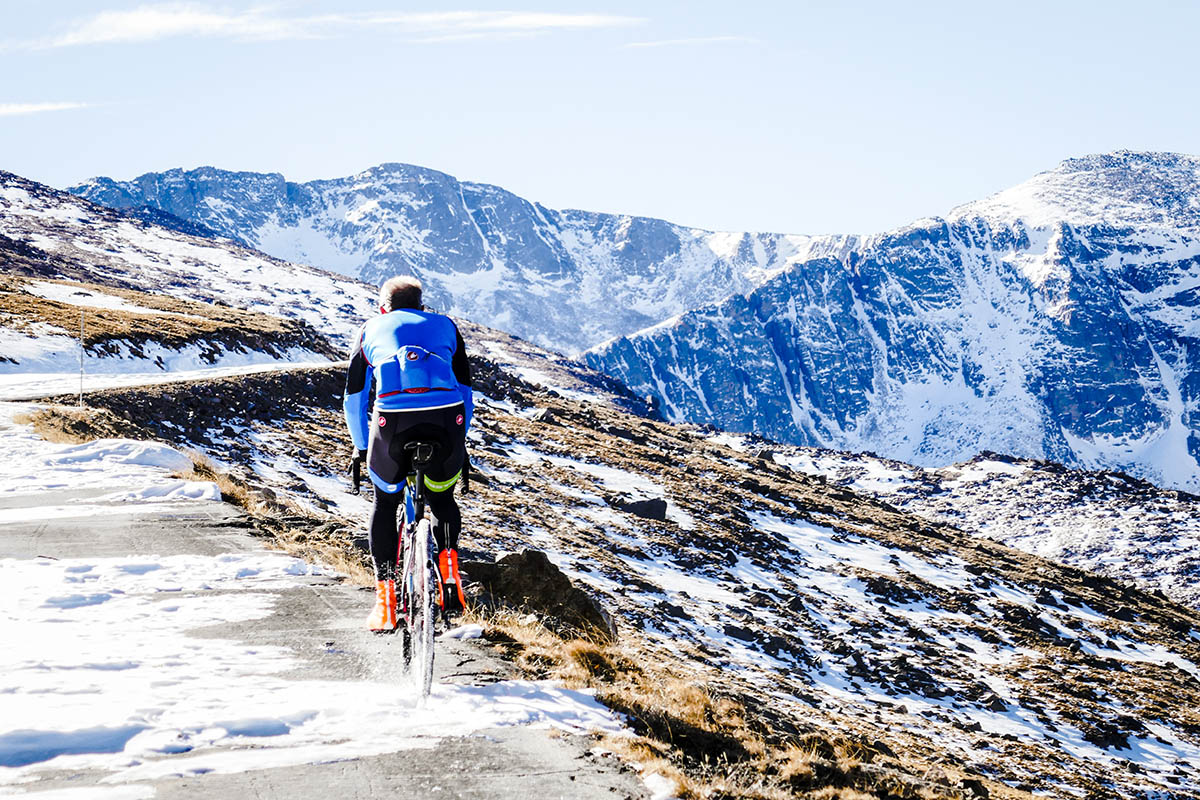 I was pulled out of my morning reverie by a text from Peder – “Evans today. Interested?”

After a week of Thanksgiving gluttony, some singletrack shred, soaking in hot springs and live music, my palette was satiated, but I felt guilty at my weekly mileage total of 15.5. With no group ride intel for Sunday, I figured maybe I’d do some solo adventure. I would find more singletrack and laugh while descending something that would greatly benefit from a dropper post.

I hummed and hawed typing back that I didn’t have the legs, that I don’t have any slicks mounted on my wheelsets. Peder countered that we are not that brutish to do a super Evans assault in late, late November on mere road tires. With some snow on the ground, slicks would be unsuitable – my 45s would be perfect. 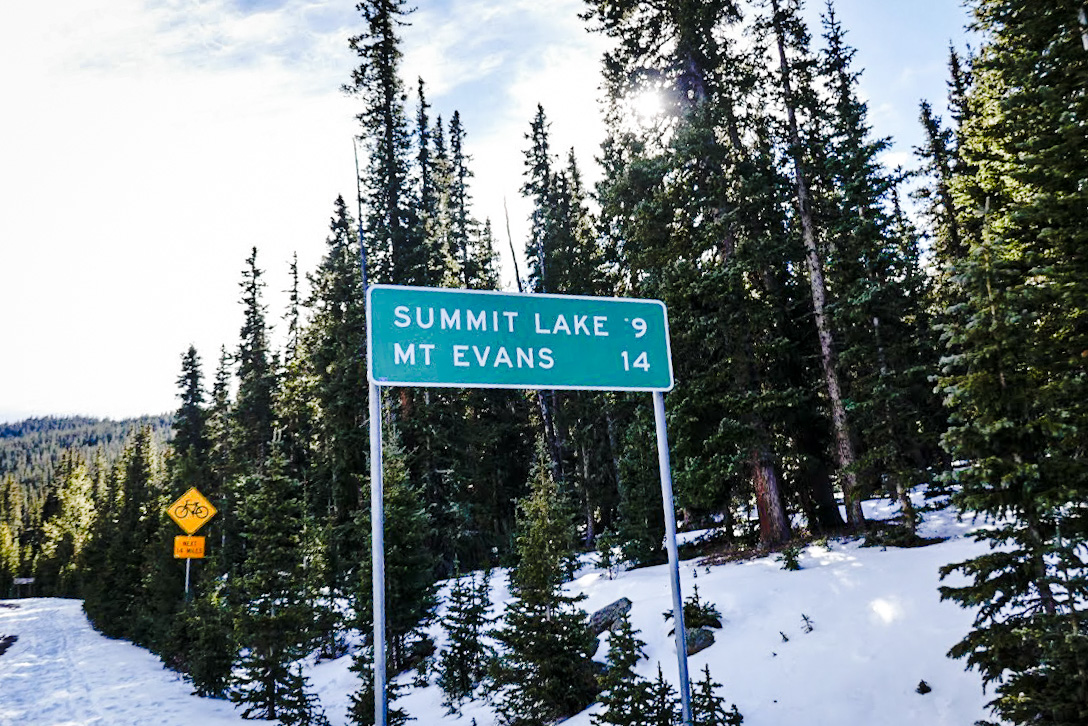 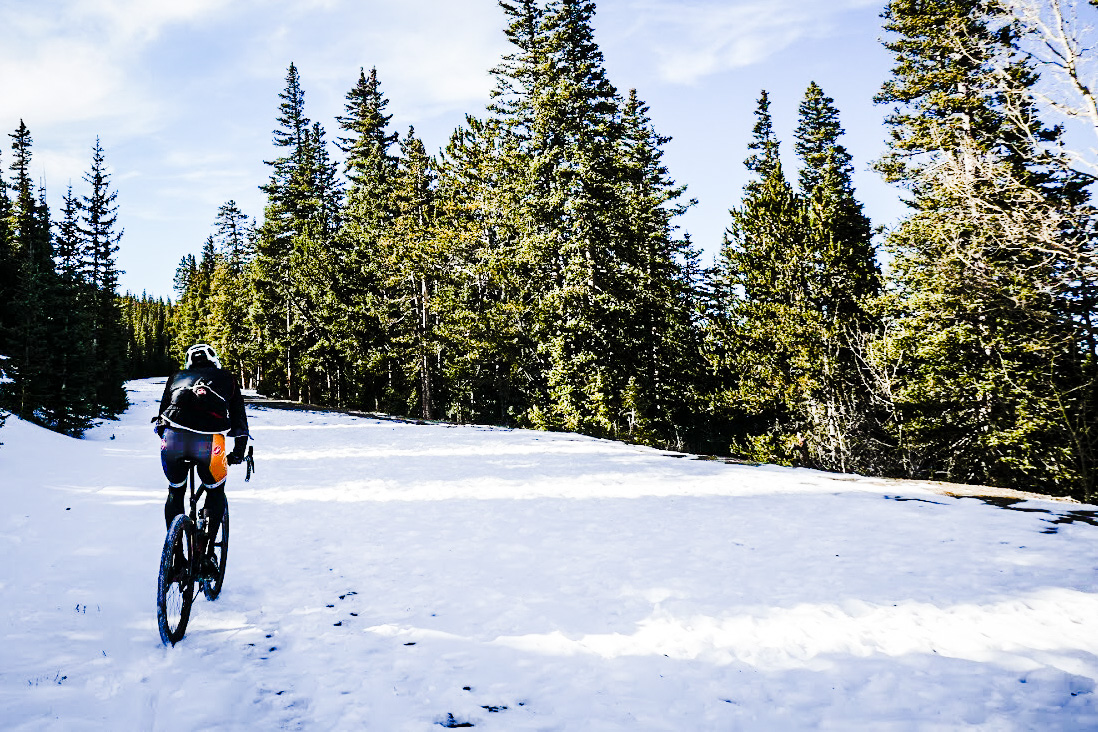 Replying that yes I was interested, it dawned on me that not only did I just agree to a ride that should not be feasible this time of year, but Peder was pressing to be on the road to Echo Lake in the next 30 minutes. Scrambling out of bed, firing up coffee and negotiating the car for nearly all of daylight hours, it was settled. Peder and I would ride Mount Evans and make it as far as we could without any heroics or taking stupid chances. 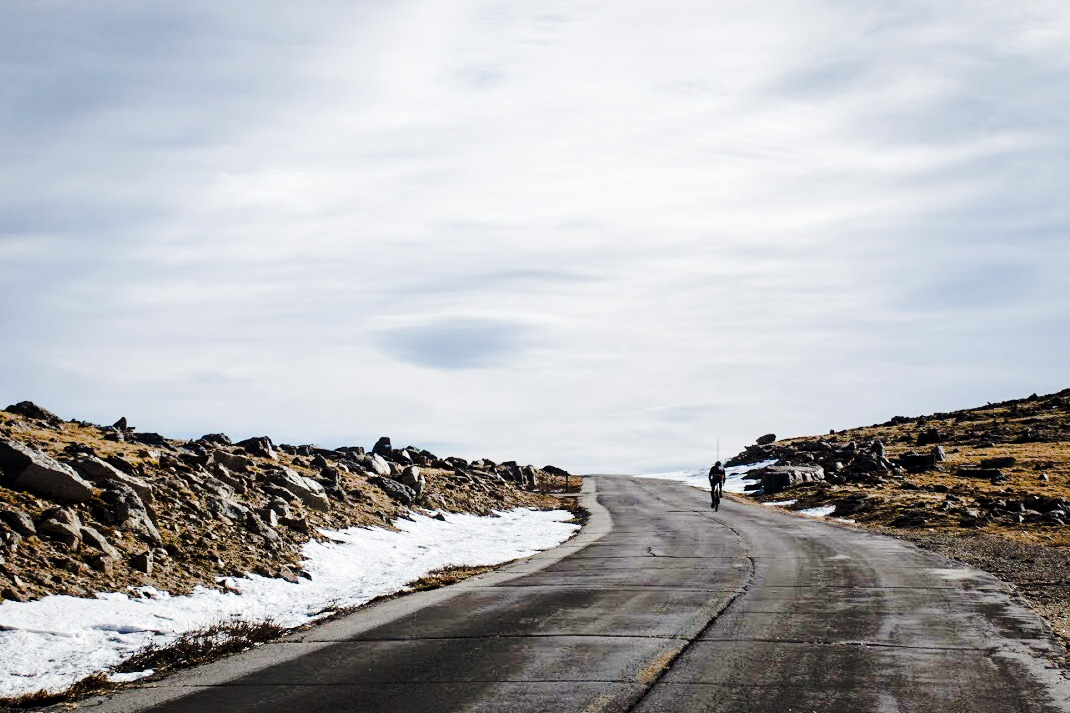 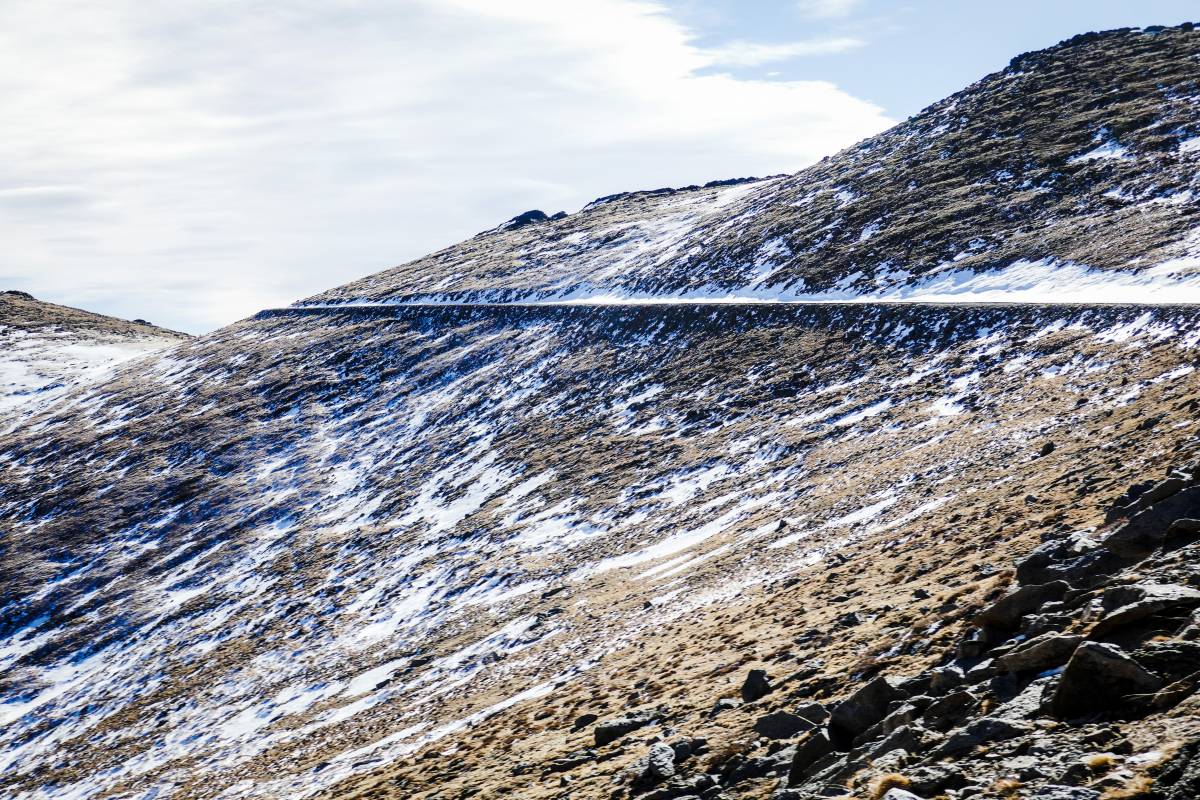 I must admit I was underprepared. I had no clue what the forecast was, so I jammed all my warm winter gear into a tote bag along with my coffee and shoved off. It turned out that Peder couldn’t have chosen a finer day, with Denver in the 70s, Echo Lake in the 50s, and the summit of Evans somewhere between 30-32° with 20mph winds. The beauty of being on a team and riding with friends means you don’t have to hold all the knowledge, but rather trust that your friends won’t lead you into completely reckless adventures (usually). 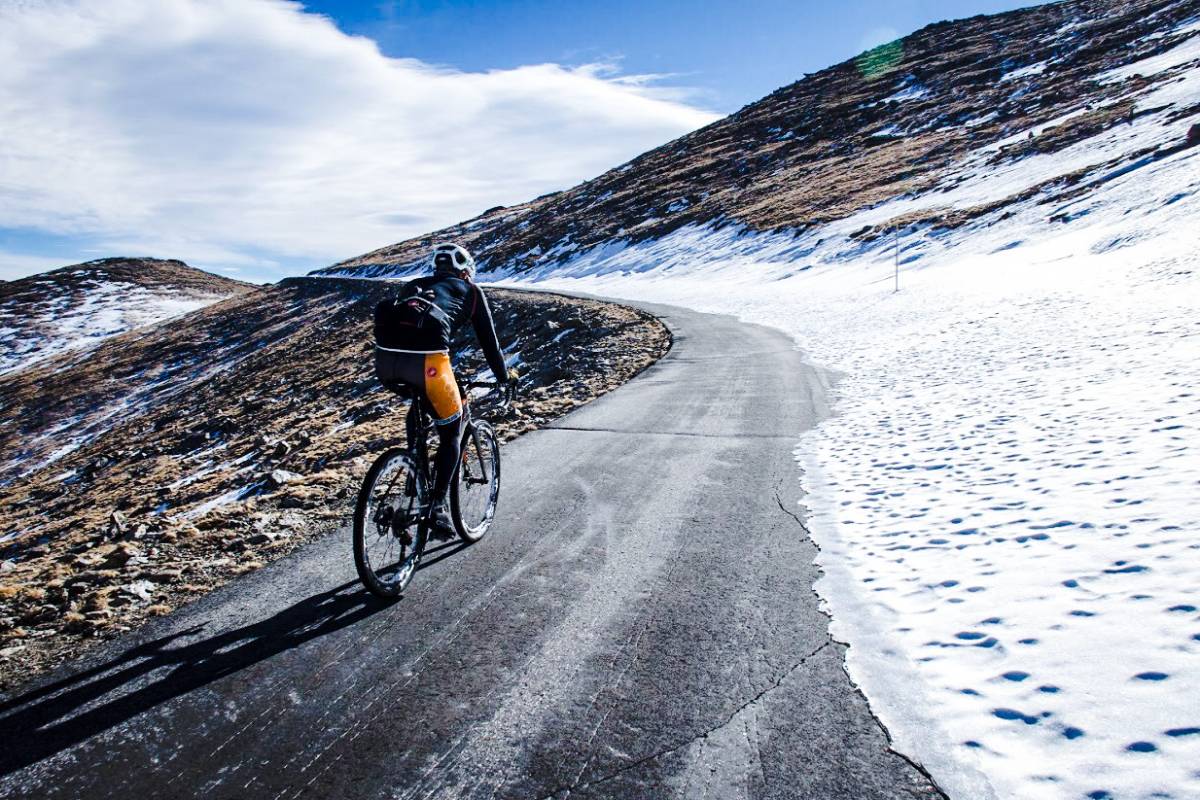 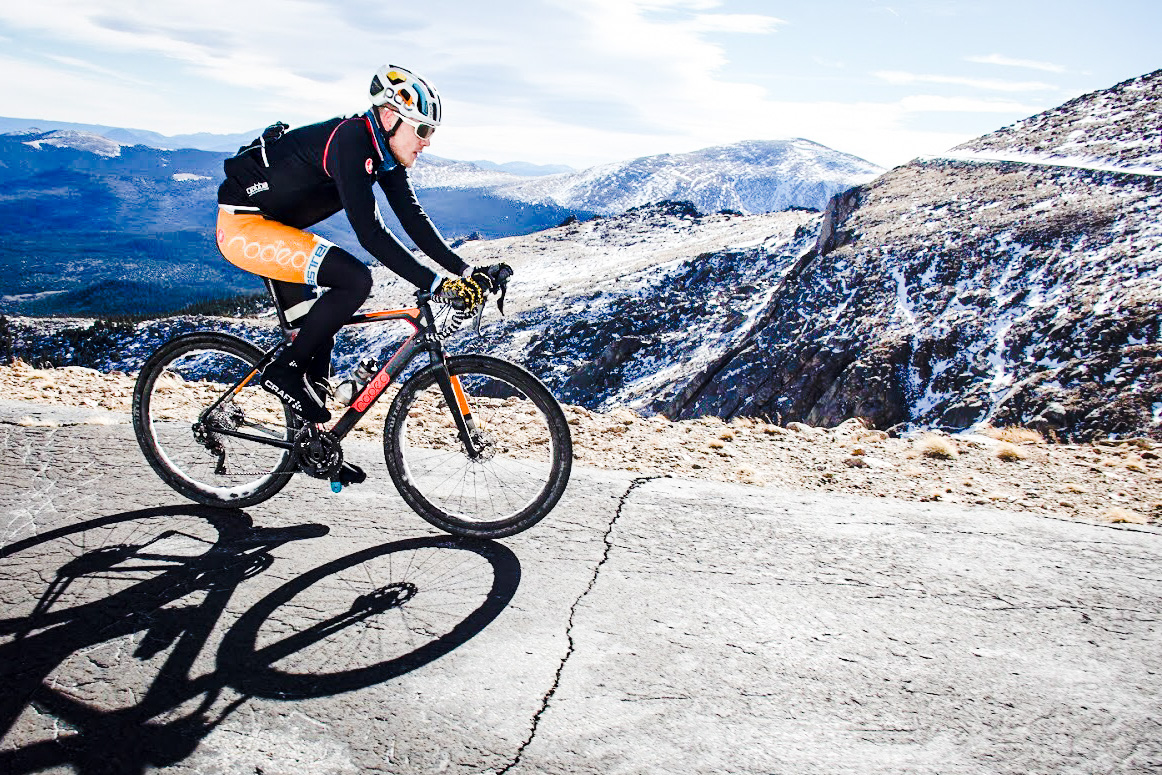 After parking and hurriedly adding the final layers – a winter cap, neck warmer and jacket – and taking one last swig of warm coffee, we locked the cars and began to climb. I’ve climbed Mount Evans two previous times, but only in a super Evans fashion. Peder and I joked at a lack of a warm up, but I was grateful to be fresh at the base of a 14-mile climb. We passed a few hikers at the closed gate of Mount Evans road, but apart from a few hikers, we would have the road to ourselves. We immediately realized what we might be in for as the first 30 feet had patches of snow and ice. Carefully picking our way, we pressed on. I had some doubt in the back of my mind, but I stayed silent because we couldn’t turn back just after starting the climb. 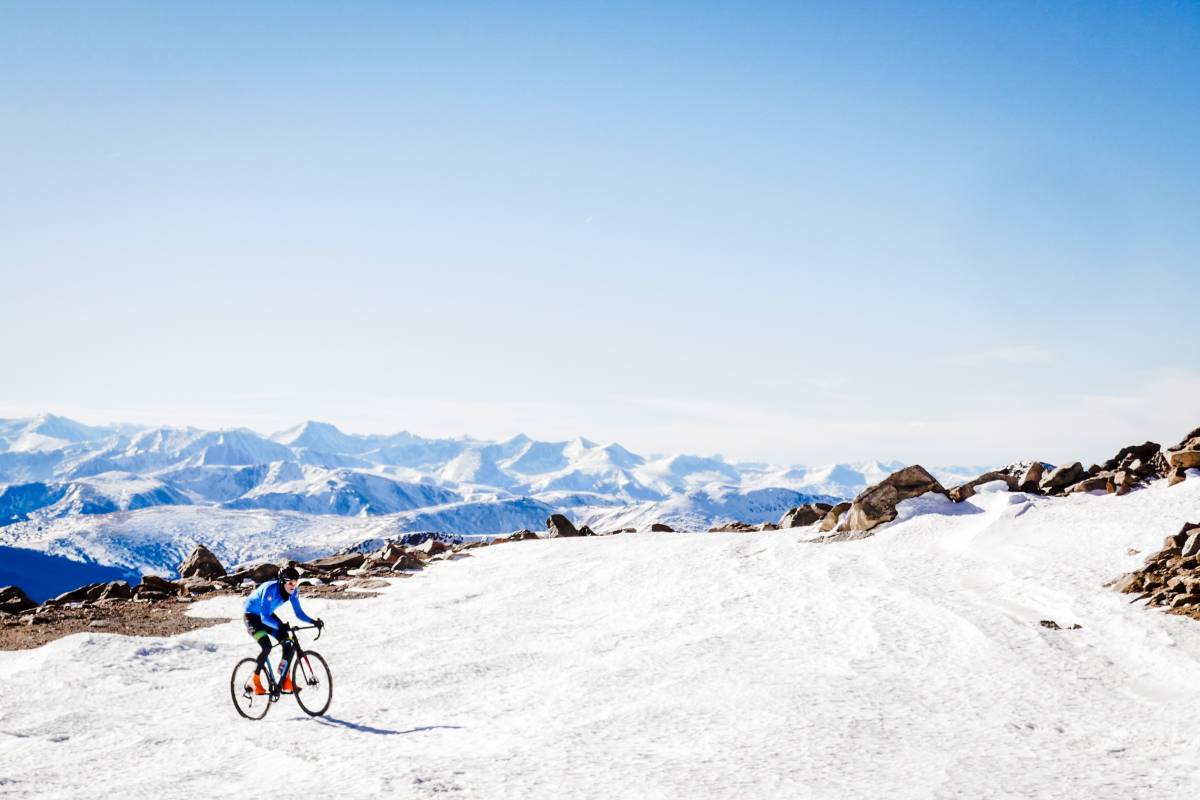 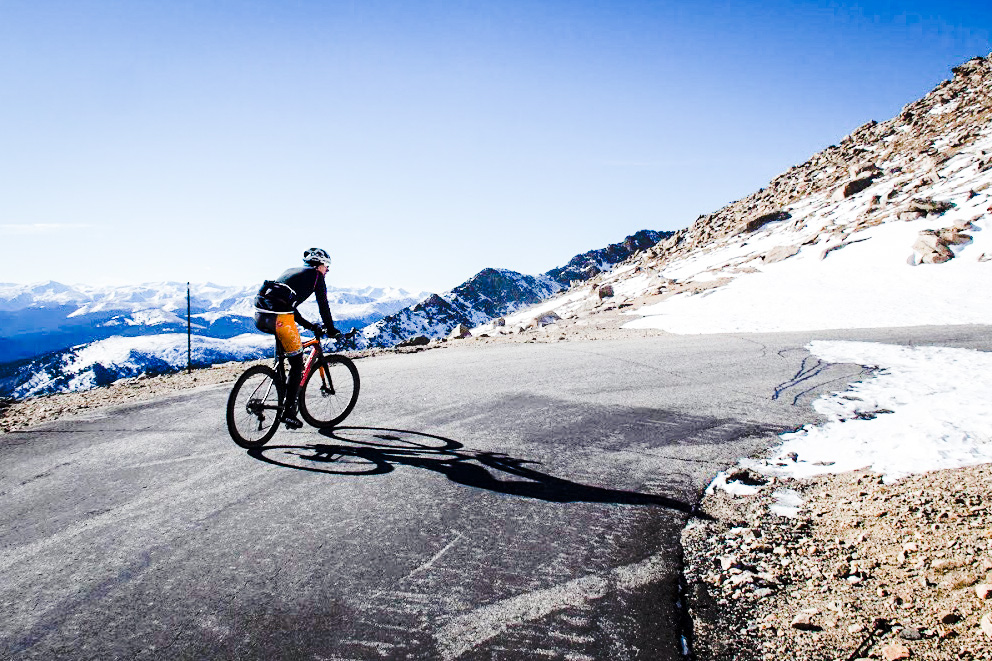 Fears quickly dissipated as the sun warmed us. We found plenty of clear pavement and we soon found ourselves too warm. I unzipped two jackets and was down to my jersey. I marveled that I was only wearing light full-fingered summer gloves on the side of a mountain in winter. Shedding our hats, we found a comfortable rhythm that kept our progress steady, but not so much that we were unable to pass the time in conversation. That was the key as time and pedal strokes were not at the forefront of our minds, allowing Peder and I to catch up, exchange stories and revel in the beauty of slowly winding our way up to 14,000ft. 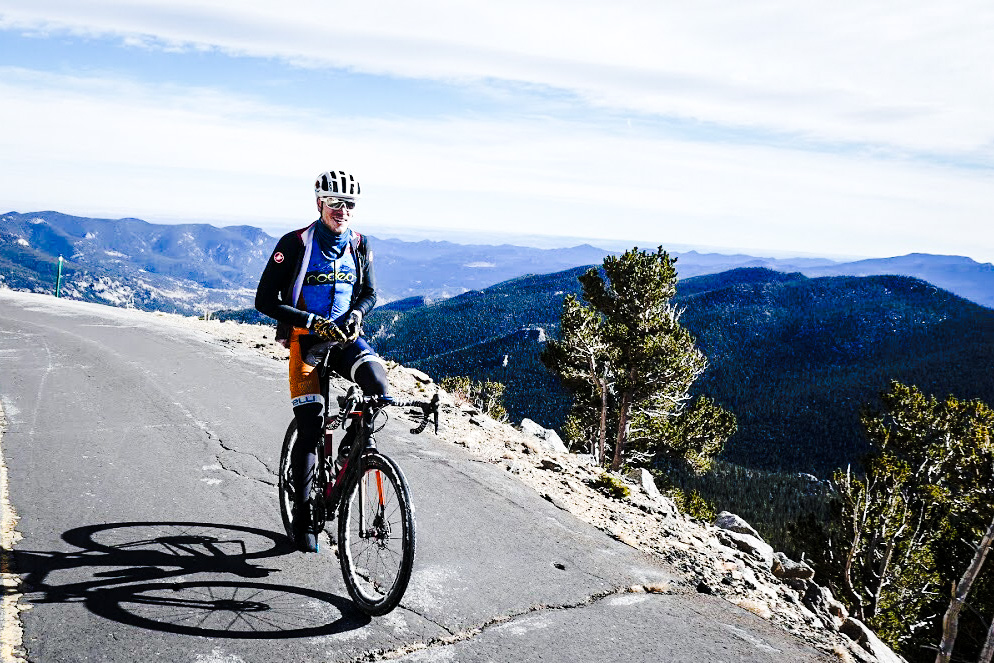 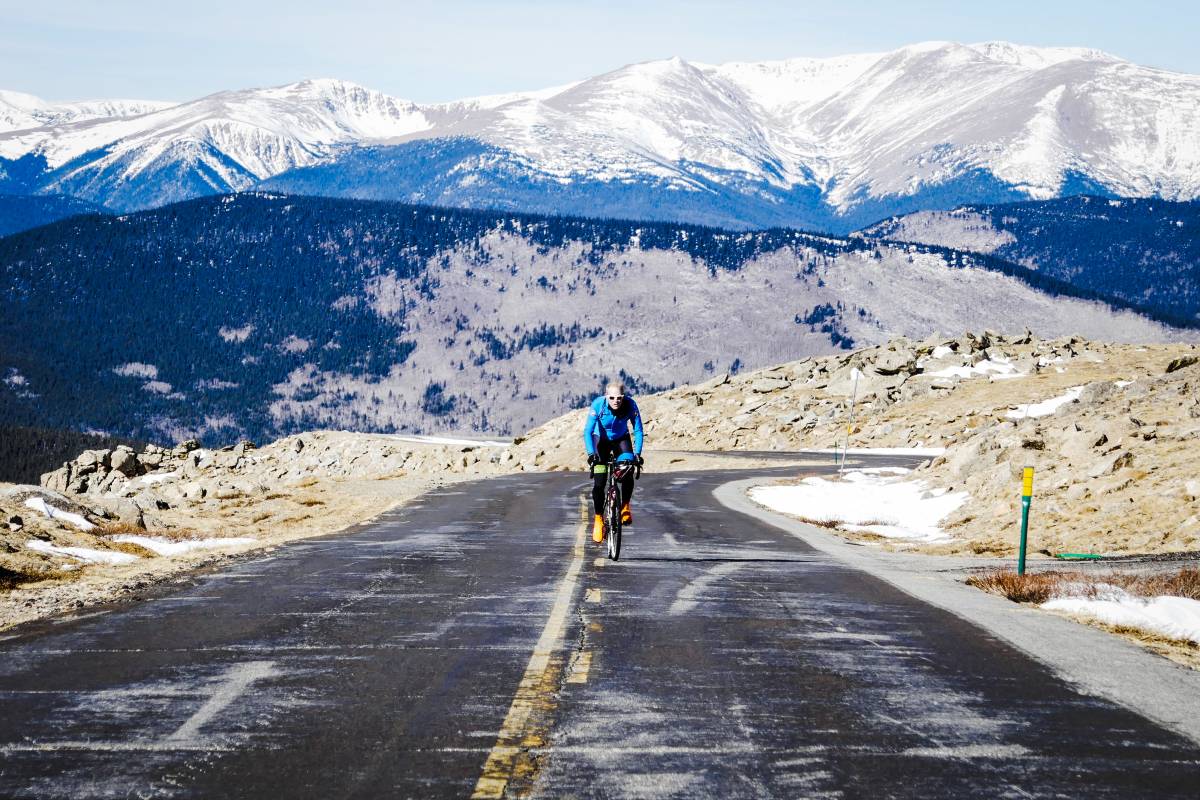 As we approached the final bend before Summit Lake we saw two hikers. We exchanged pleasantries about the weather and they ominously said, “Yes! It is great at the top and would be better than earlier”. I was unsure what was wrong with earlier since not a cloud was in sight, so I filed that as, “hmm we should be ok, let’s keep going”. 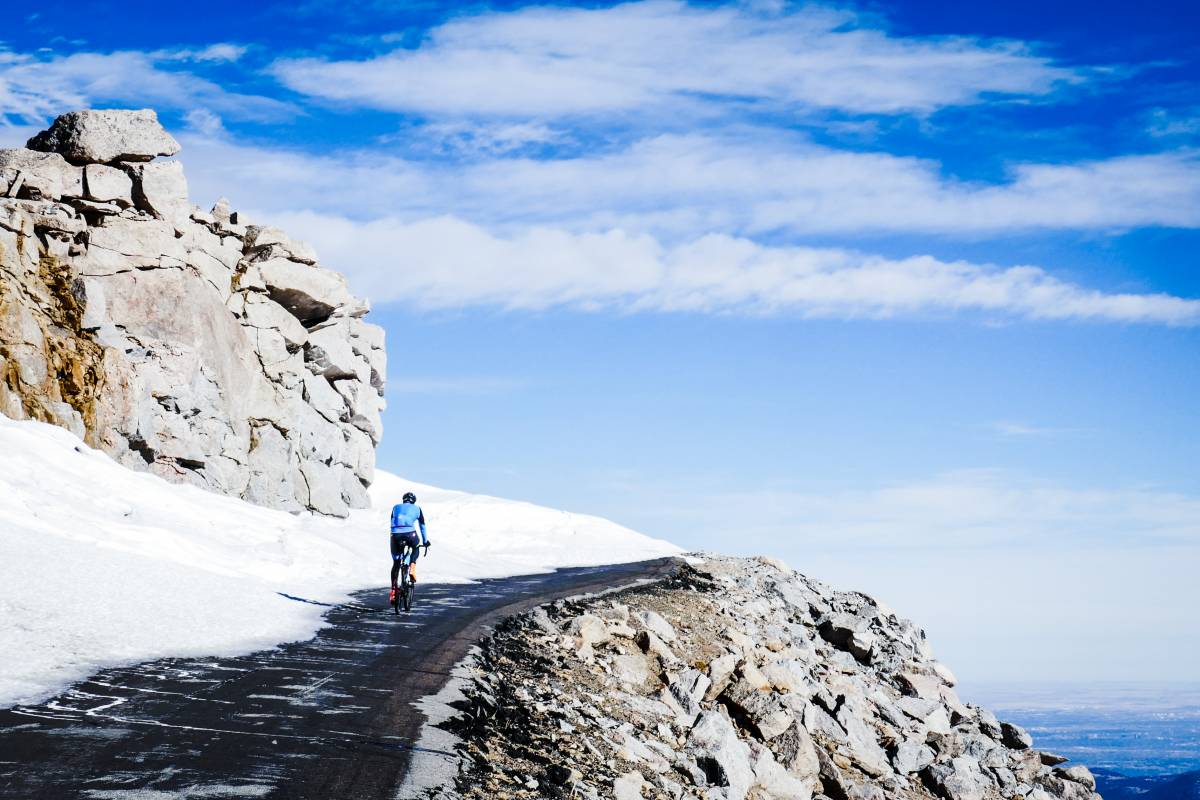 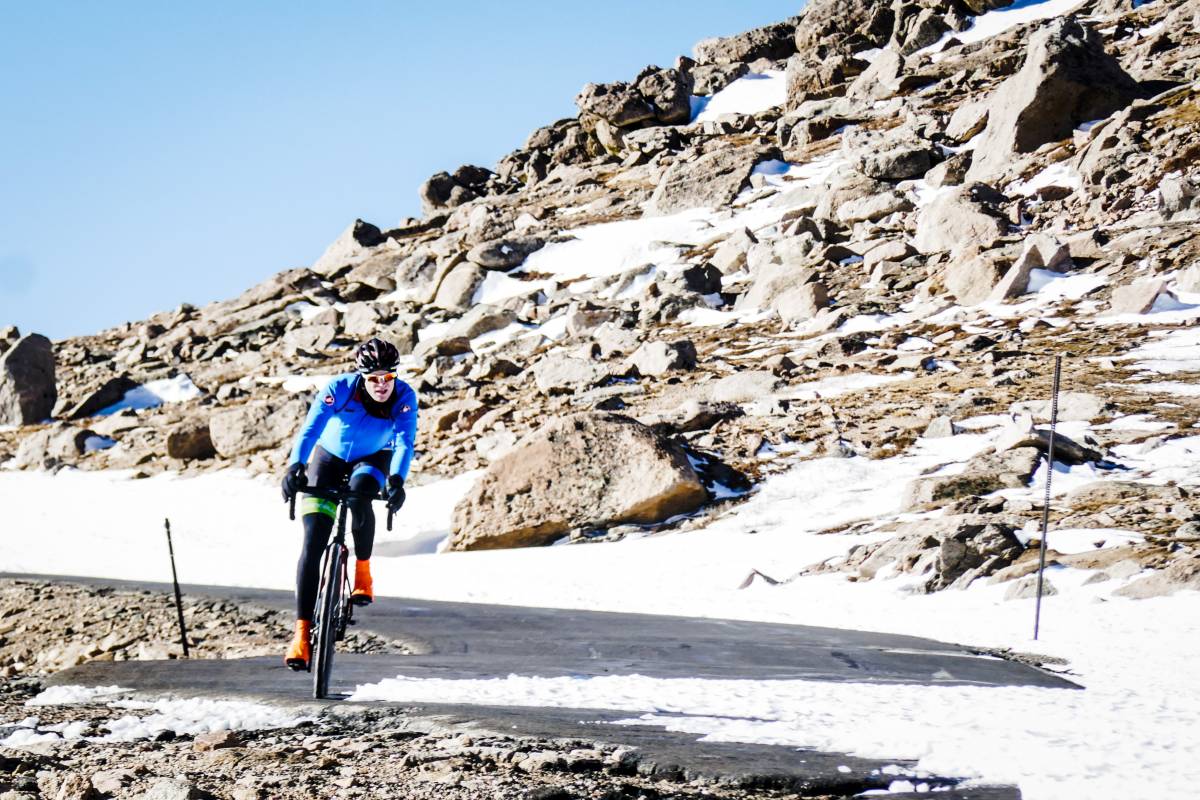 The next bit of life we encountered were the bighorn sheep who often frequent the road up to the summit. They seemed perplexed at our presence and surely they must have thought, “those wild donkeys, don’t they know they don’t belong up here”? They graciously allowed us to snap a few photos before we pressed on, summit nearly in sight. 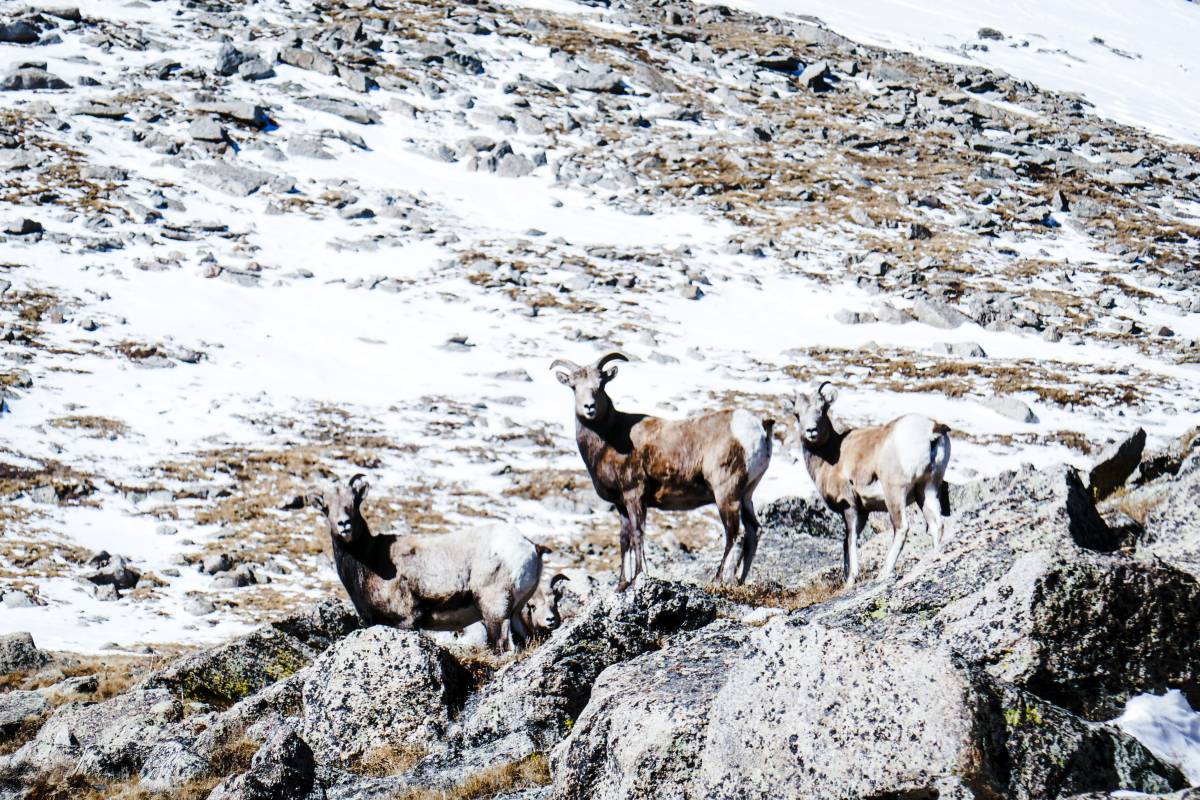 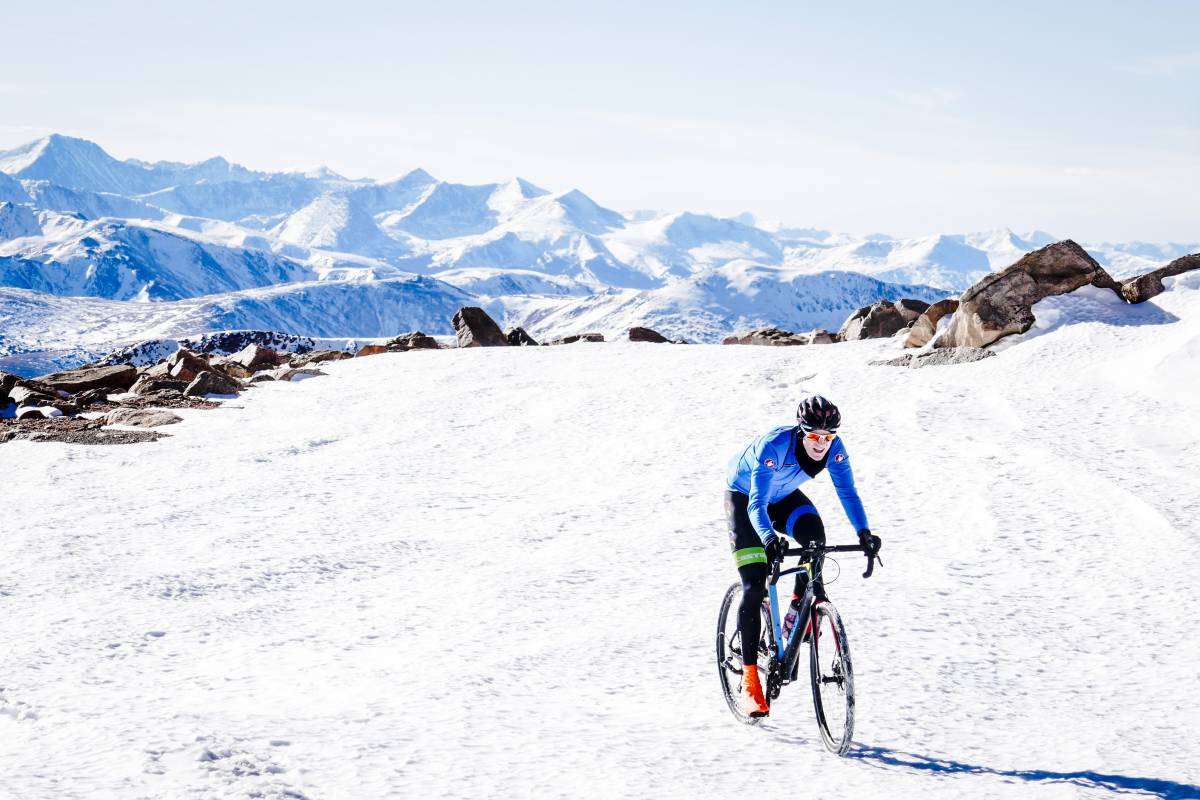 At Summit Lake with more snow drifts blown across the road we found that most drifts were rideable as the top of the snow had a layer of crust that could support the weight of a rider and bike. That was until Peder found a deep hole that engulfed his front wheel and sent him head over heals into the snow. My concern was abated by Peder laughing while getting up, we chuckled and made note not trust all the drifts. 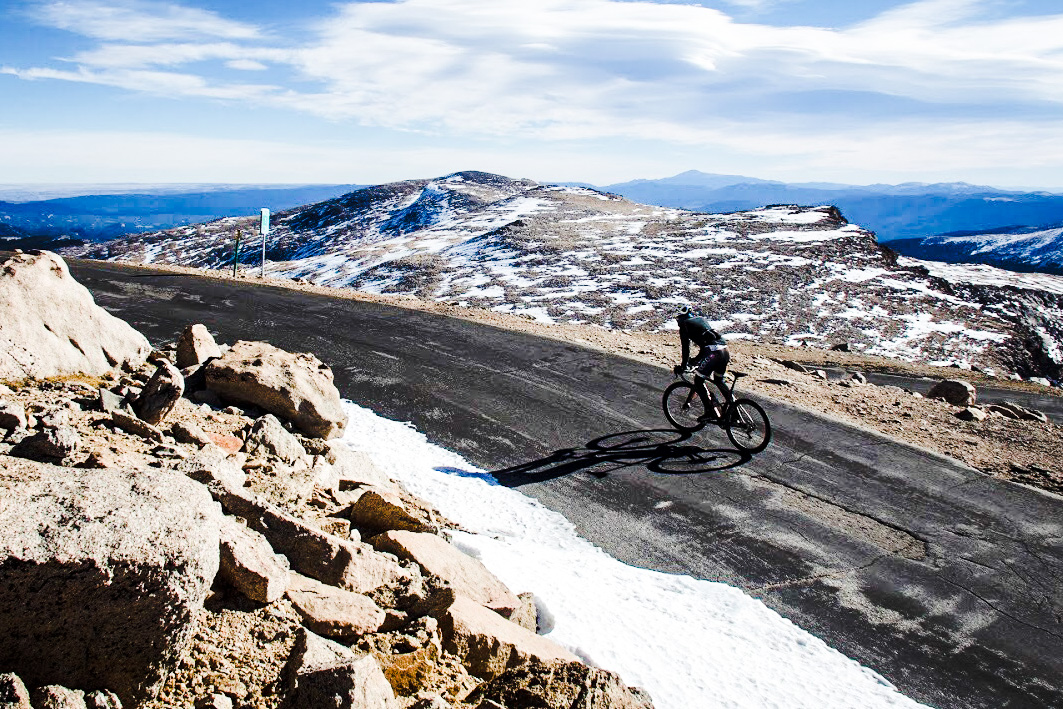 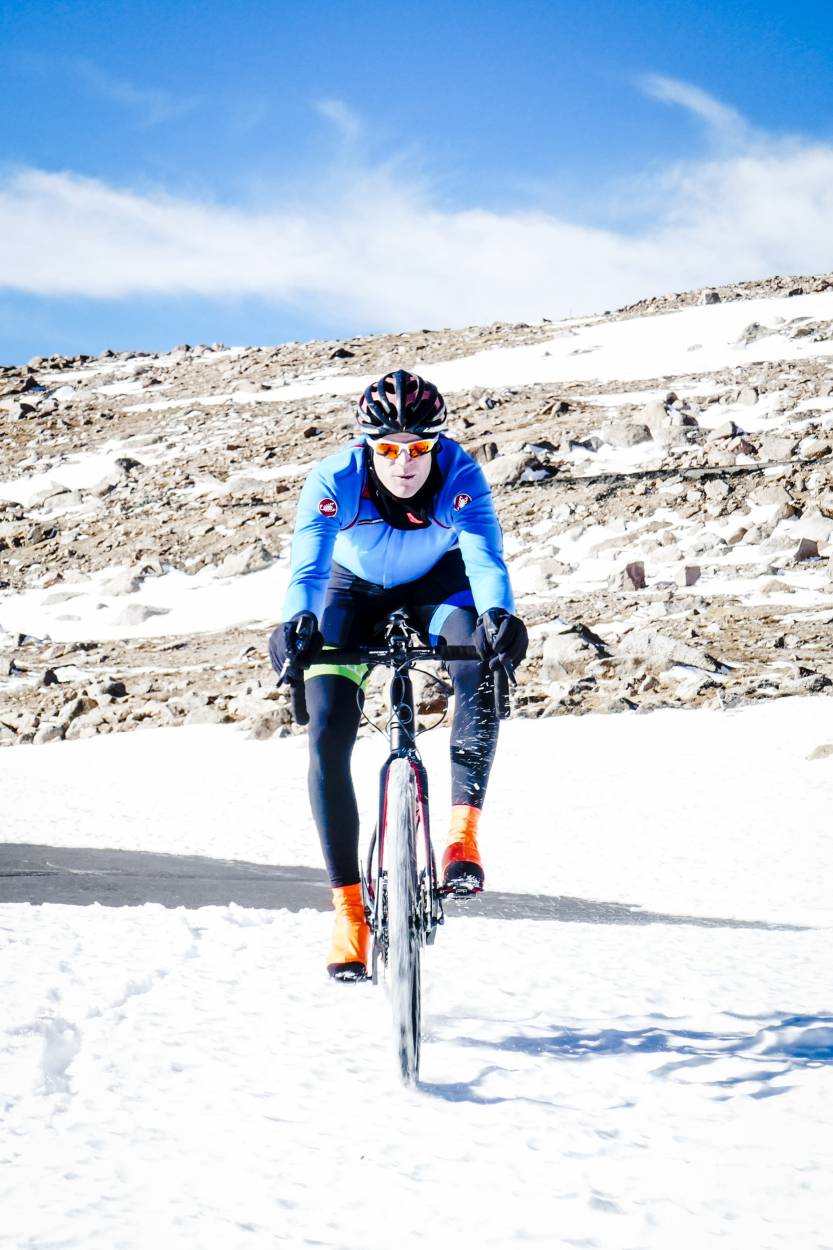 The headwind on the switchbacks was biting as it tried to worm its way between the layers and any exposed skin. Then we rounded the bend and with a tailwind we felt like leaders in a grand tour effortlessly climbing, while the sun warmed our backs. Some of the drifts were too tall or too long to ride and we found our hike-a-bike fitness lacking as we were out of breath. Riding through the drifts was not any easier as they required loose body English and power akin to riding through a sandpit in a cyclocross race. Maybe it was just the lack of oxygen nearing 14,000ft that made it difficult. 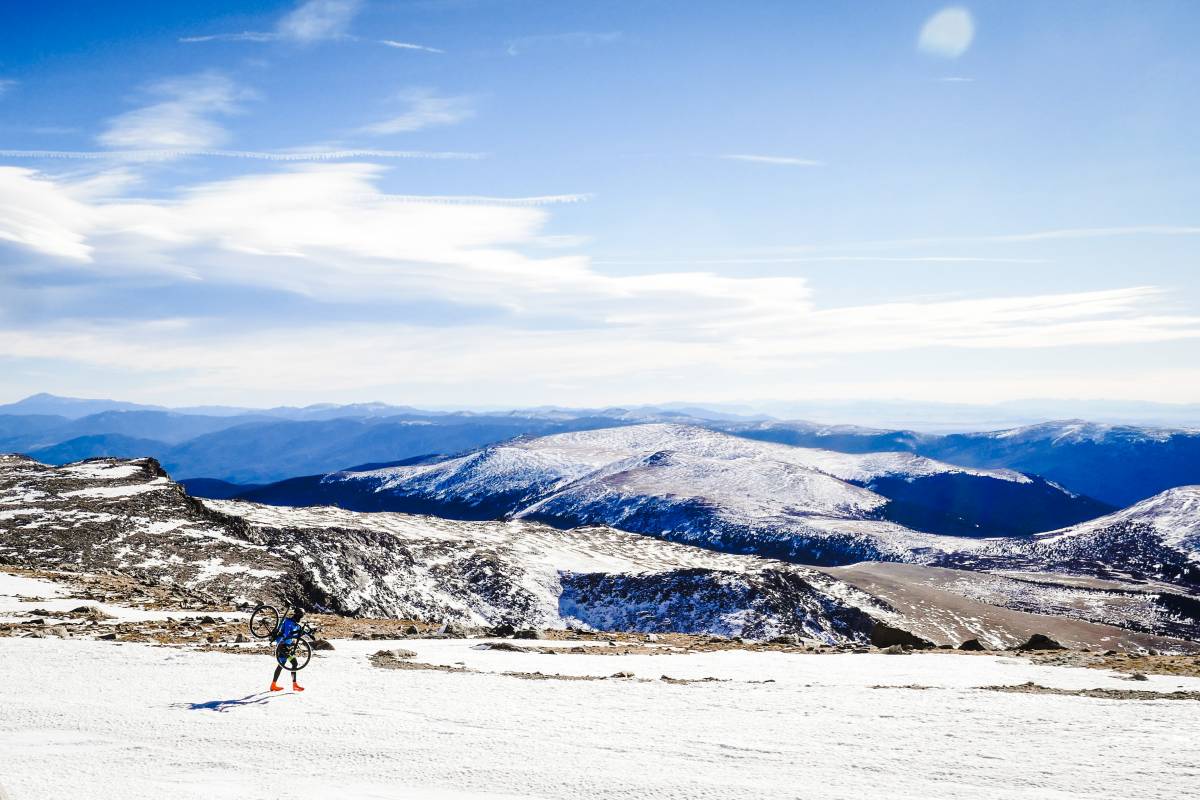 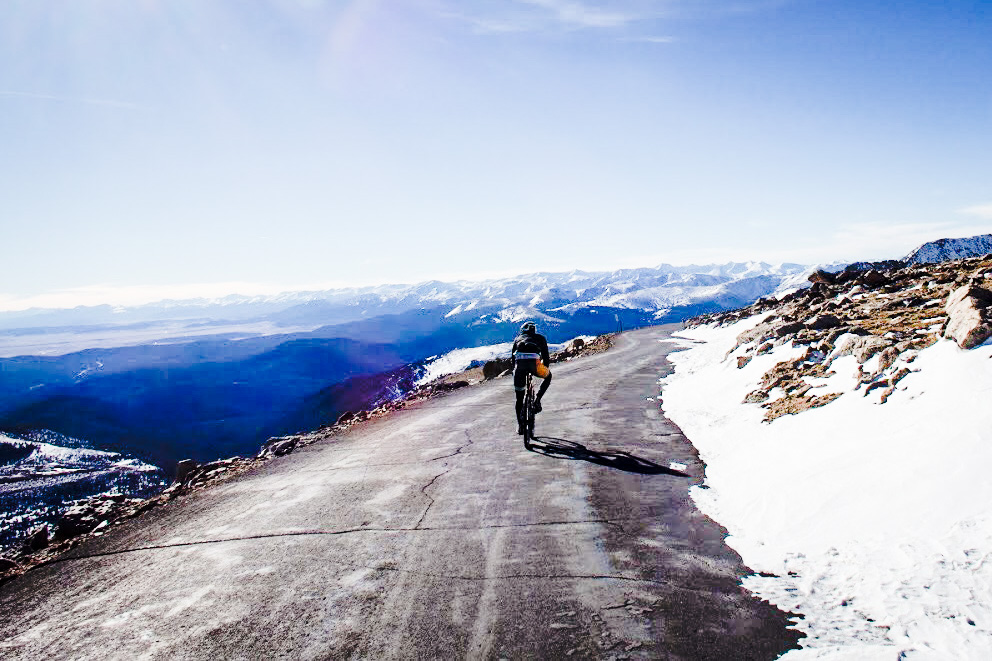 We rounded a few more bends and the summit was within reach. Once at the top we were faced with a conundrum – the sign for the summit of Mount Evans was missing. The thought went through my mind that in this day in age, without photographic proof, many may claim that the achievement was not met. Brushing the thought away as absurd, because indeed there we were at 14,000ft, we struck a hard style pose, got it on camera, and began to soak in the accomplishment. That wasn’t the fastest or the hardest I’ve ridden up Mount Evans, but it was the most memorable. The clear skies allowed you to see for miles, Denver was visible on the plains to the east and the other peaks glistened to the west in their snow white caps. The thought of warm clothes and hot food began to creep into our minds, and with a little prodding from the wind, we decided it was best to leave the thin air behind. 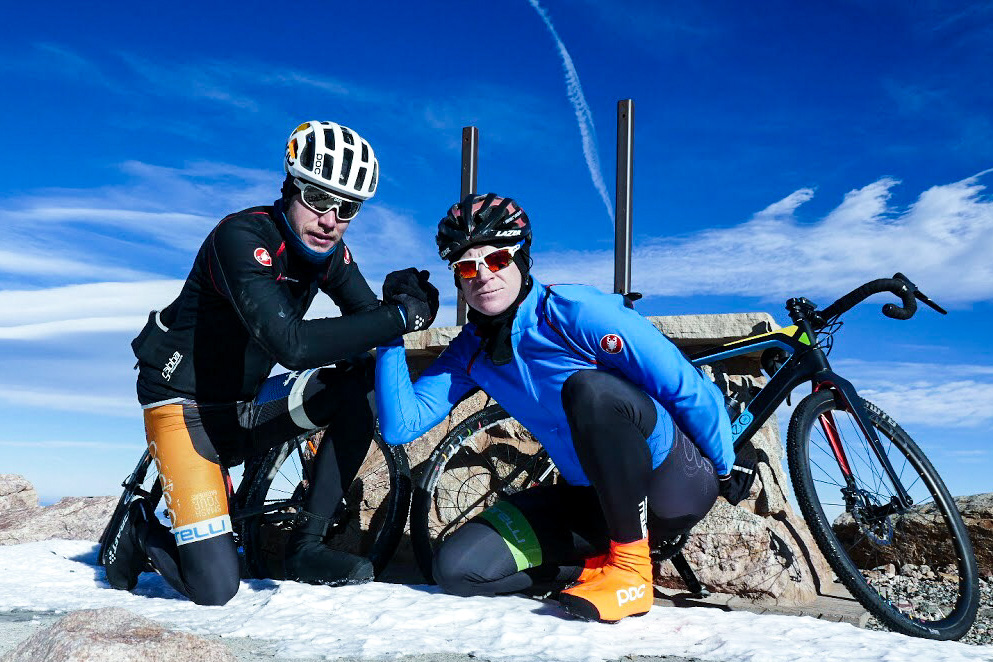 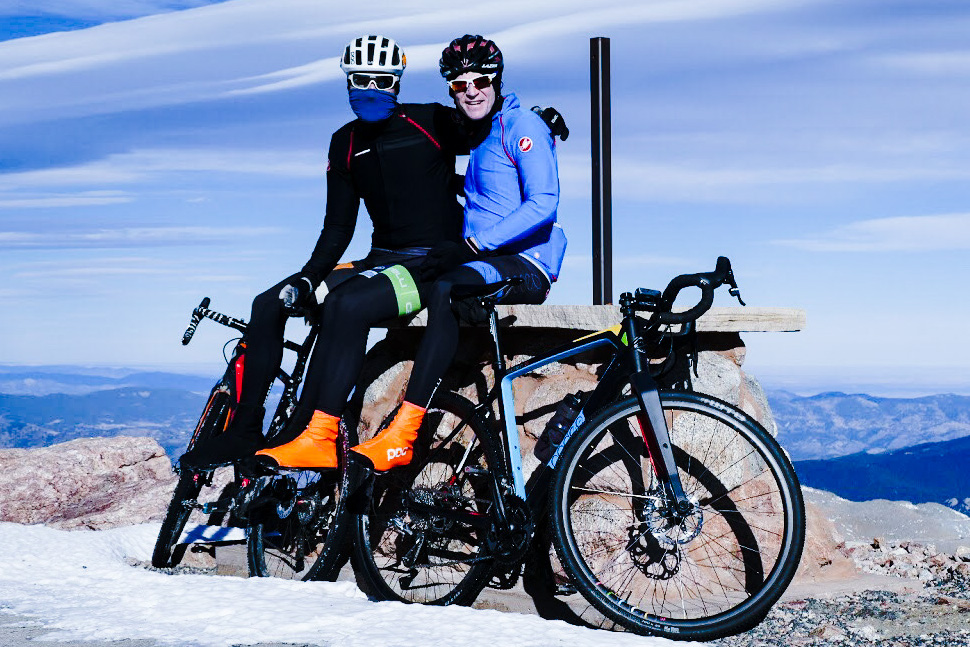 The wind at the summit was the worst we had experienced all day, and I could already feel my fingers beginning to lose their warmth. We agreed to descend with minimal stops for photos for the sake of our frozen fingers. However, the lack of oxygen got to us as we decided to take some photos of riding through snow drifts. For some reason, instilled with confidence, I rode through a large drift, unweighted my front wheel to clear the top and when bringing it back down it buried deep in the snow. With a whoosh, I found myself flat on my back and encapsulated in snow. The snow broke my fall and was as comfortable as a landing as I could have hoped for. I was cracking up. Peder caught some of the embarrassment on camera and shared in my laughter as I brushed off the snow. 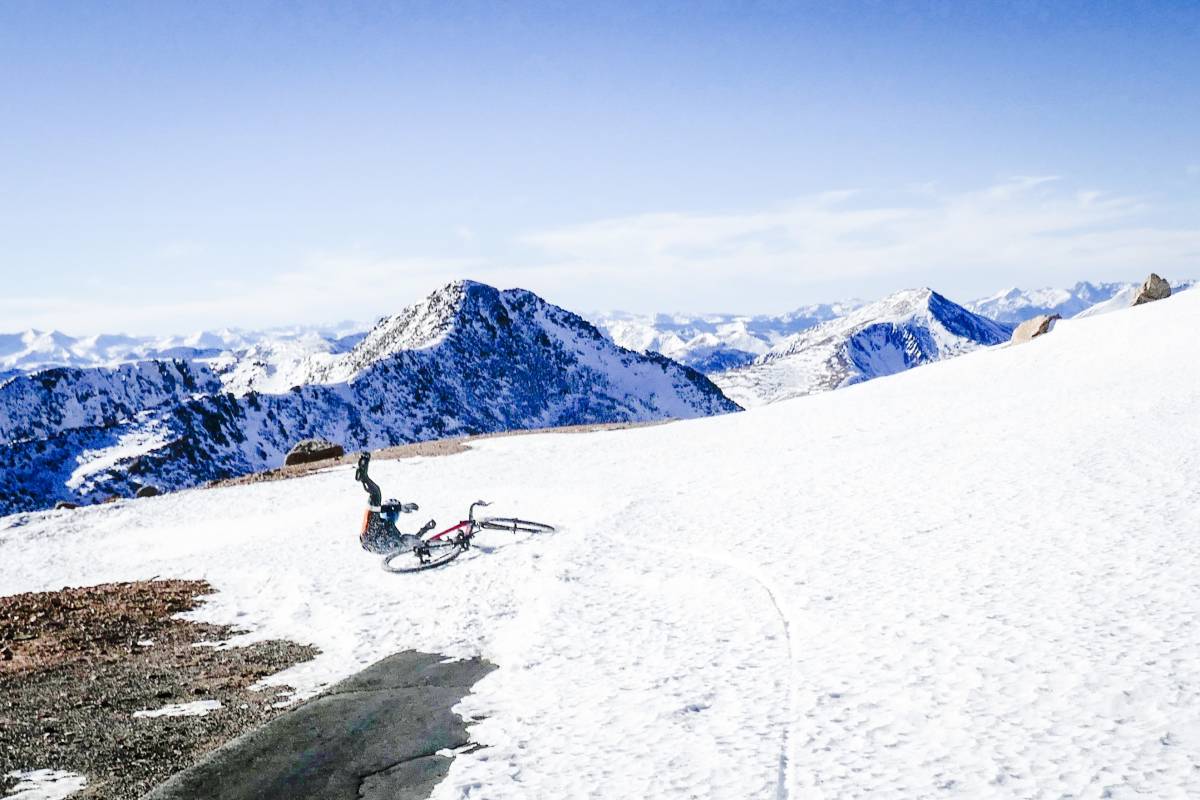 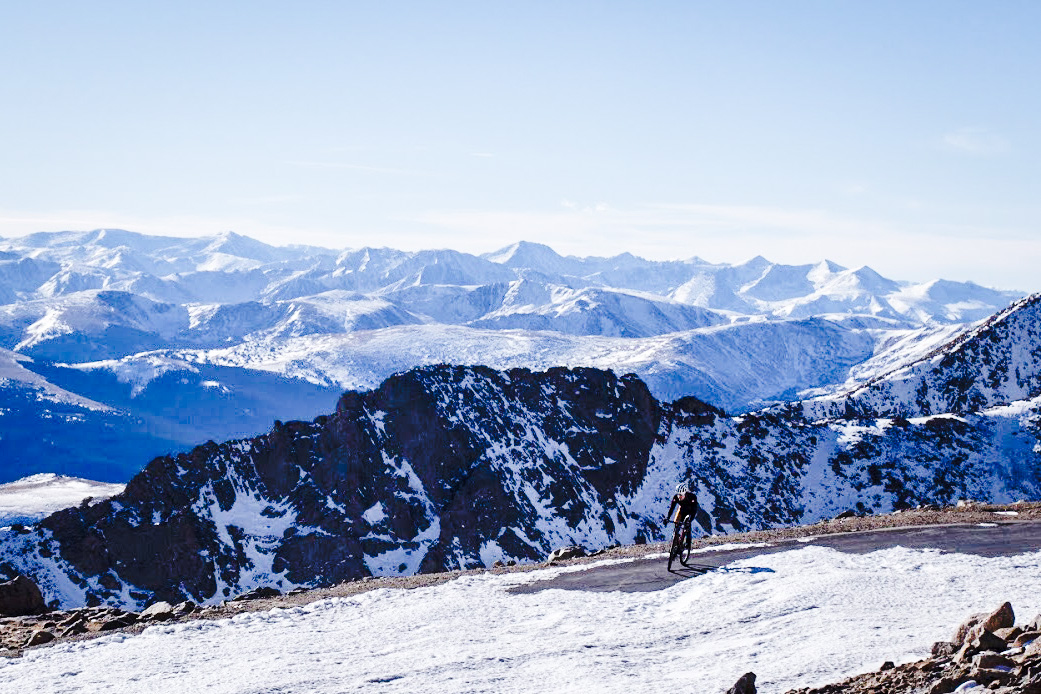 With a great deal of more caution we descended the snow swept mountain. The shadows began to stretch in the mid afternoon light and the rest of the descent whirred by. When we reached the cars back at Echo Lake, we shared sounds of delight. We felt as if we had just gotten away with something. We certainly stole some candy out of the mountain jar. It is a rare day that the weather is nice enough for a summit of Mount Evans in late November. 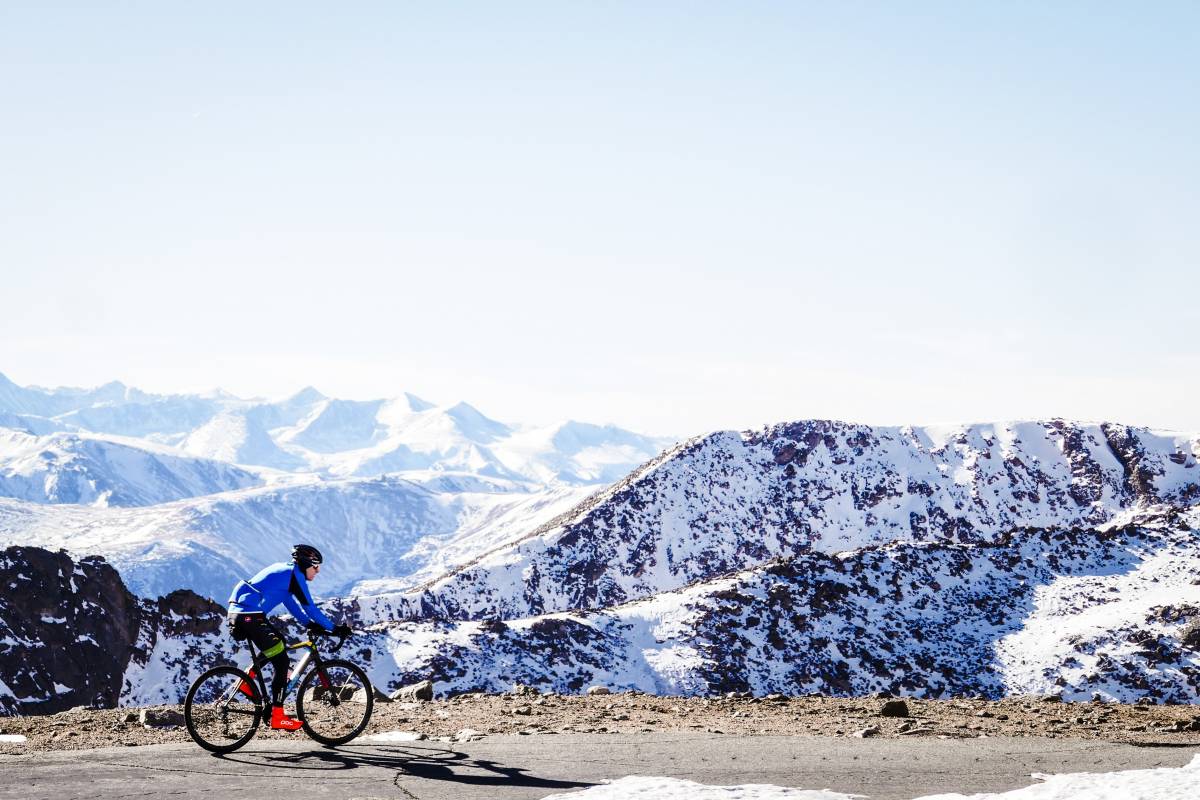 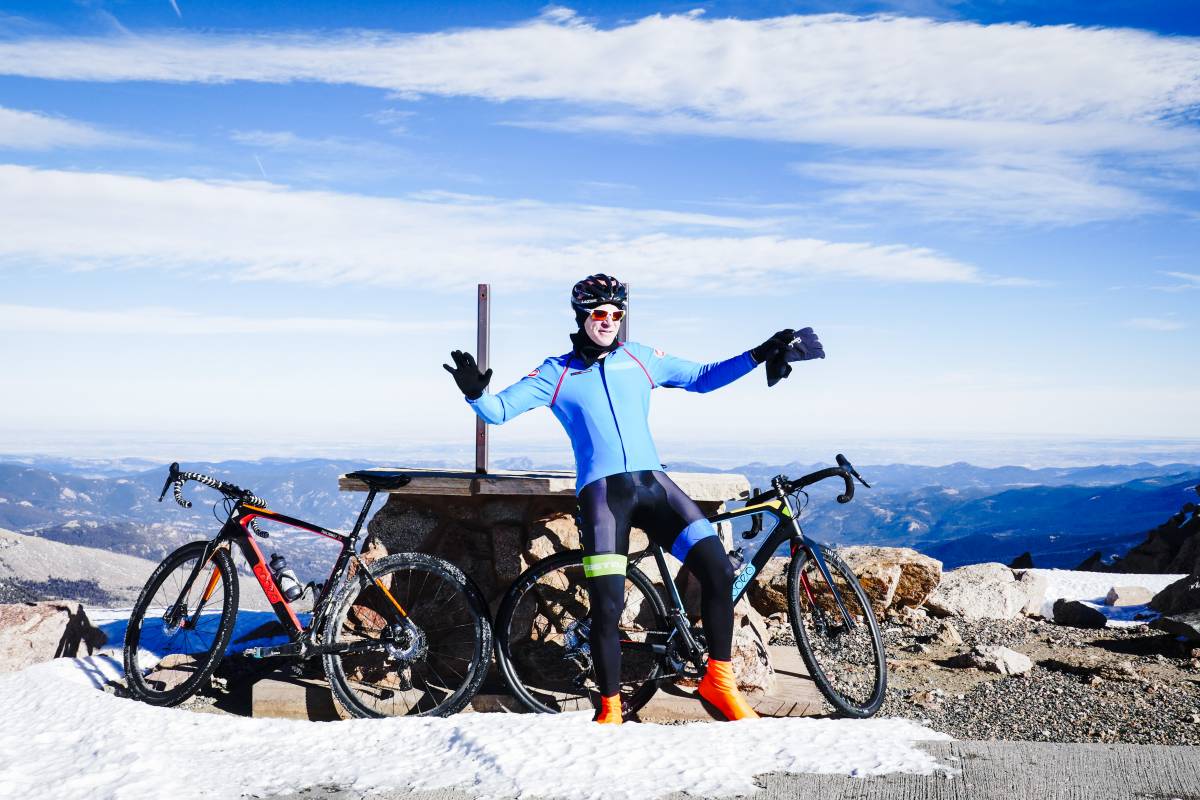 We loaded the bikes, changed into street clothes and made our way back into Idaho Springs for a belated hot lunch. Reveling in what we had just done, it was smiles and heat at full blast on the toes all the way down to Idaho Springs. Sometimes all it takes is a text message and then everything snowballs from there.