Lost in the Land of Eagles: First Impressions 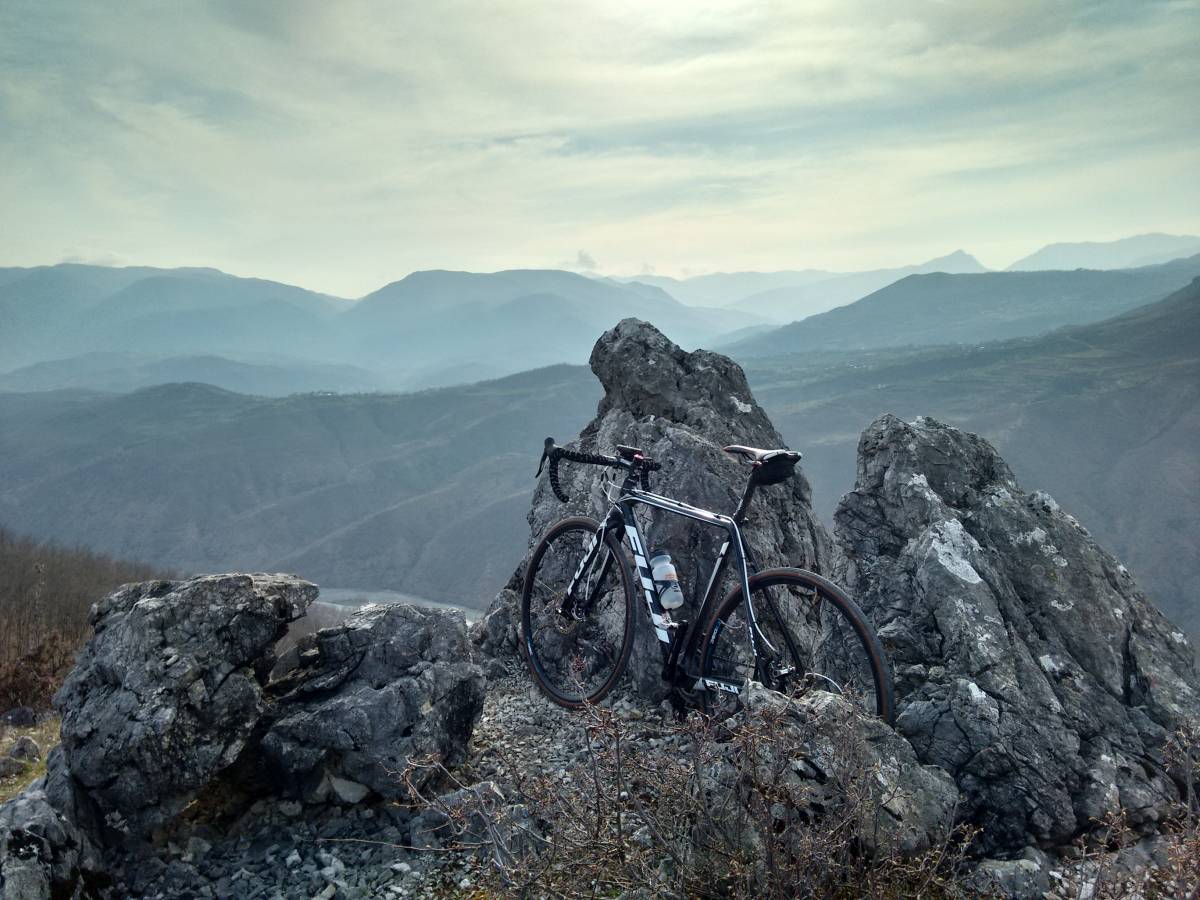 Tire Pressure? Feels about right, though there’s no way to tell for sure.

A burst of giggling erupts as I kneel to unzip the suitcase. Maybe I should have waited to don my kit until after I finished fiddling with my bike, or at least put some sweatpants on over my bibs. It’s too late now; there is already a gaggle of Albanian school girls, friends of my host-family’s daughter, gathering outside the open door to my room. They avert their eyes as I exit, shoes in hand, and return to my bicycle in the yard.  It has similarly attracted a group of neighborhood children who scatter when I approach. Taking the handlebars, I swing my leg over the saddle, but before I can clip Eduart, the patriarch of my host-family, stops me. He’s spent the last hour silently watching me assemble my bicycle, but now he’s clearly concerned. He doesn’t speak English, and my Albanian is still pretty poor, so he simply points to my brakes and inquires with a thumbs-up. I squeeze the levers and return the hand gesture to assure him that everything’s fine, then aim the bicycle down the gravel path which serves as our driveway and kick off.

Three weeks spent sitting through language and cultural lessons for ten hours a day. Three weeks spent trying a bit too much of Albania’s delicious but fatty cuisine. Three weeks off the bicycle. I’m always surprised by how quickly my body seems to forget its need for action, for motion, and even more surprised by how foreign the saddle feels once I try and return to form. This, my first ride in Albania, is no exception; my body knows the melody but has forgotten how to play it. While maneuvering down the steep, rock strewn driveway I am suddenly aware of how much I have taken my bike handling skills for granite. When I reach the pavement of the main road out town, however, I have little time to collect myself; I seem to have stopped all of the foot-traffic within fifty yards dead in their tracks. The patrons of the café across the street are standing, some craning their necks to have a better look. Worse yet, I have been spotted by a group of ten or so youths who had been loitering up the road to the north, which, incidentally, is the direction I must go to leave town. As one they let up a cheer, and as I ride past them, trying to pedal as confidently as possible, a number of them turn to chase me. They follow me, yelling and screaming, the entire half kilometer to the outskirts of town. Then the road goes up.

Librazhd. It’s a small mountain town roughly in the middle-eastish of Albania, it’s only a (relatively) short drive from the Macedonian border, and it’s is my Peace Corps “training site.” For those who do not know, Peace Corps volunteers must complete roughly two months of language, technical, and cultural classes before being placed in “permanent sites,” the towns or villages where they spend their two years of volunteer service. Training sites are chosen for their proximity to the Peace Corps regional office and for reputation as towns receptive to periodically housing groups of cocky, wide-eyed American do-gooders-in-the-making. However, if I didn’t know any better, I would have sworn that Librazhd was chosen for its natural beauty, its dramatic mountain views, and for roads seemingly designed for CX style adventures…

…and for “climbing specialists.” 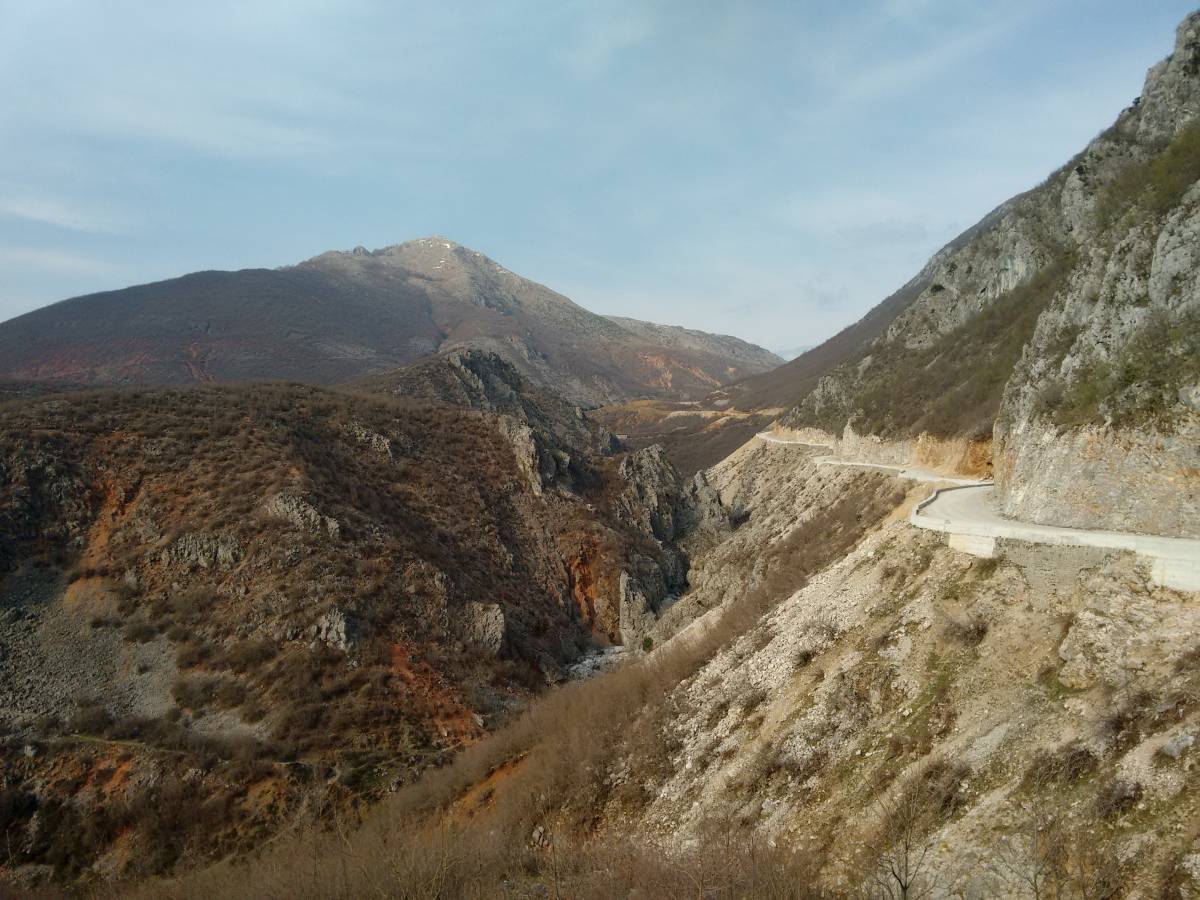 Due to time constraints placed on me by my training schedule (roughly sixty hours a week), rides have been infrequent and exceptionally short, with my longest ride clocking in at around 40 kilometers, and most hanging around the 25 km mark. However, I have yet to complete a ride with less than 700 meters of climbing. From the moment one leaves Librazhd by the “north route” (one of only three roads of any length in the town, and the only one without a dangerous amount of traffic) the road starts going up and doesn’t stop until the pavement runs out. Actually, I lied; the road continues to go up well after the pavement runs out. As of this writing, I don’t even know where the road finally levels out and starts to descend, or if it even does so at all. Every ride has been out and back; I climb until the clock says I need to turn around and then rocket back into town. So, for all I know, the road might go up and on forever (though the map claims it ends anticlimactically just a few meters from the Macedonian border).

As for the conditions of the roads, I arrived in Albania expecting most of them to be fairly rough. I had in mind that all paved roads would be made of chip’n seal and full of gaping potholes. However, on this front I have been pleasantly surprised; the paved roads in and around Librazhd are of pretty good quality, perhaps owing to the fact that many of them have been recently repaved and that they receive relatively little traffic. The unpaved roads, on the other hand, have turned out to be exactly as “adventuresome” as I had envisioned them to be, if not even a bit more so. You see, roads in Albania, and especially those which snake their way high into the mountains, have generally been around for a few centuries at the very least. This means that they were originally laid out with foot and animal traffic in mind, and therefore the grade is often steeper than most dirt roads found in the United States. Also, many of these roads, and in particular those which serve as the only route into a fshat (village/hamlet in Albanian) seem to have, at one pointed, been constructed with cobblestones, worn down, and then repaired using whatever material and method was at hand. This has resulted in some amusingly dangerous riding conditions, such as a hard packed dirt road with rounded, softball sized cobble stones jutting out at intervals of only five or six inches, as if the entire road was some sort of petrified dinosaur-egg nest; or an ancient cobblestone road which has been repaired by spreading chunks of shale across it, which then get sent sliding across the slick cobbles when they come in contact with bike tires.  Combine these with grades that often seem to sit between 7% and 12% and you’ve got yourself a downright challenging ride, even with a mountain bike. 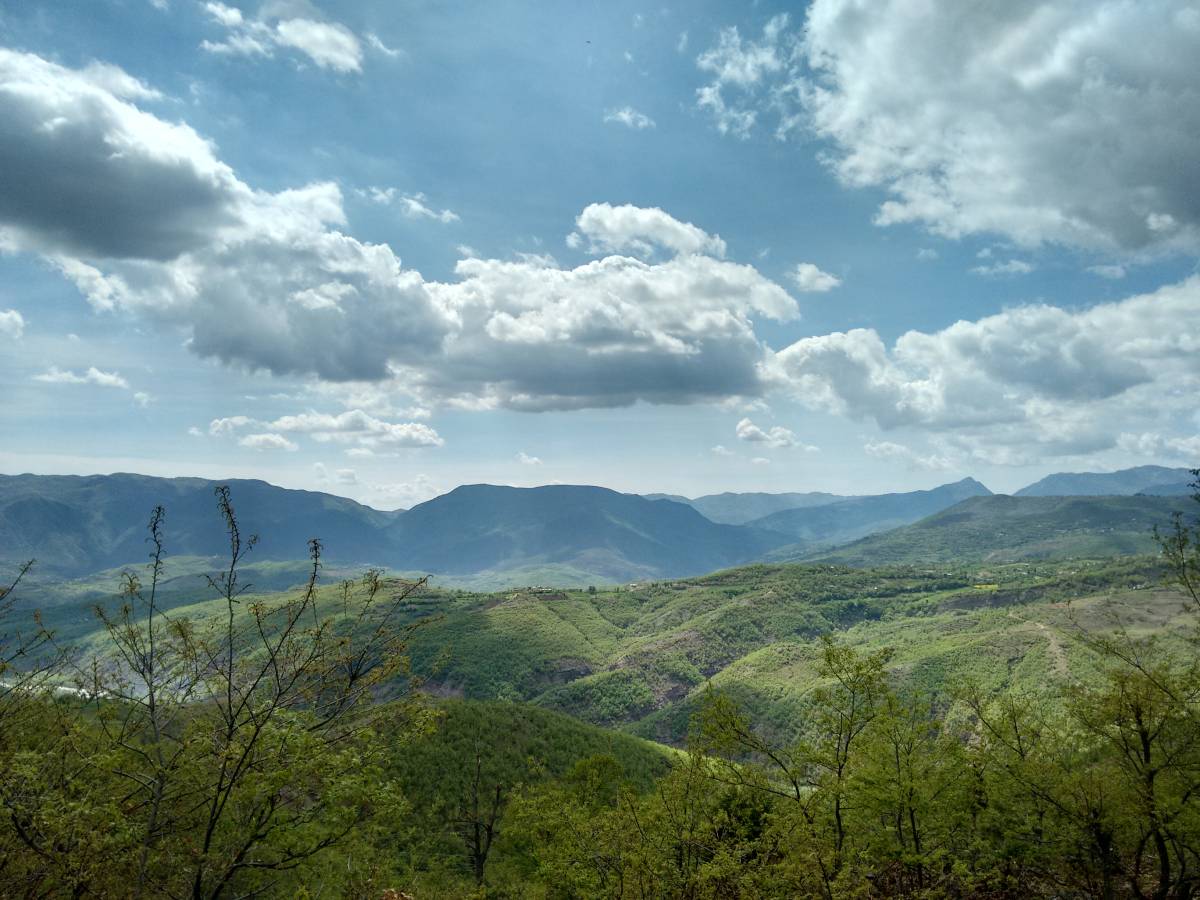 Aside from the road conditions and the tremendous amount of climbing I have encountered around Librazhd, my first few rides here have introduced me to a number of other idiosyncrasies and obstacles associated with trying to cycle recreationally in Albania. For instance, in the United States, though almost all of my rides took place in what I would call pretty rural farmland, the threat of death by collision with livestock was never very high on my list of concerns. Rides in Albania, on the other hand, do not seem to be complete without at least one rear-lockup caused by a flock of sheep crossing the road at an inopportune moment, or a gomar (Albanian for “donkey”) lazily standing in the middle of a blind curve. On top of omnipresence of farm animals, there are also the stares, startled expressions, whistles, and yells from almost every villager and shepherd I pass. Then, of course, I also have to mention the sometime heated debates in broken Albanian about the feasibility of riding a bicycle twenty kilometers, let alone one hundred, and all for “fun” at that.

In fact, there are so many amusing and interesting dissimilarities between riding in Albania and riding in the United States that I am certain that in a few months I will have enough material to devote a posting to each one of them individually. So with this in mind, I will keep this post short and finish with a few words about how absolutely breathtaking the scenery around Librazhd is. Try an imagine the lush knolls of Appalachia surrounded by a ring of shear snowcapped peaks and dotted with centuries old villages and the remnants of mediaeval fortresses peering ominously down at you from dramatic cliff faces, and then, in my opinion, you will have only a small idea of how beautiful and intriguing the landscapes here can be. Actually, on second thought, words truly can’t do it justice, so I’ll just let the pictures speak for themselves… 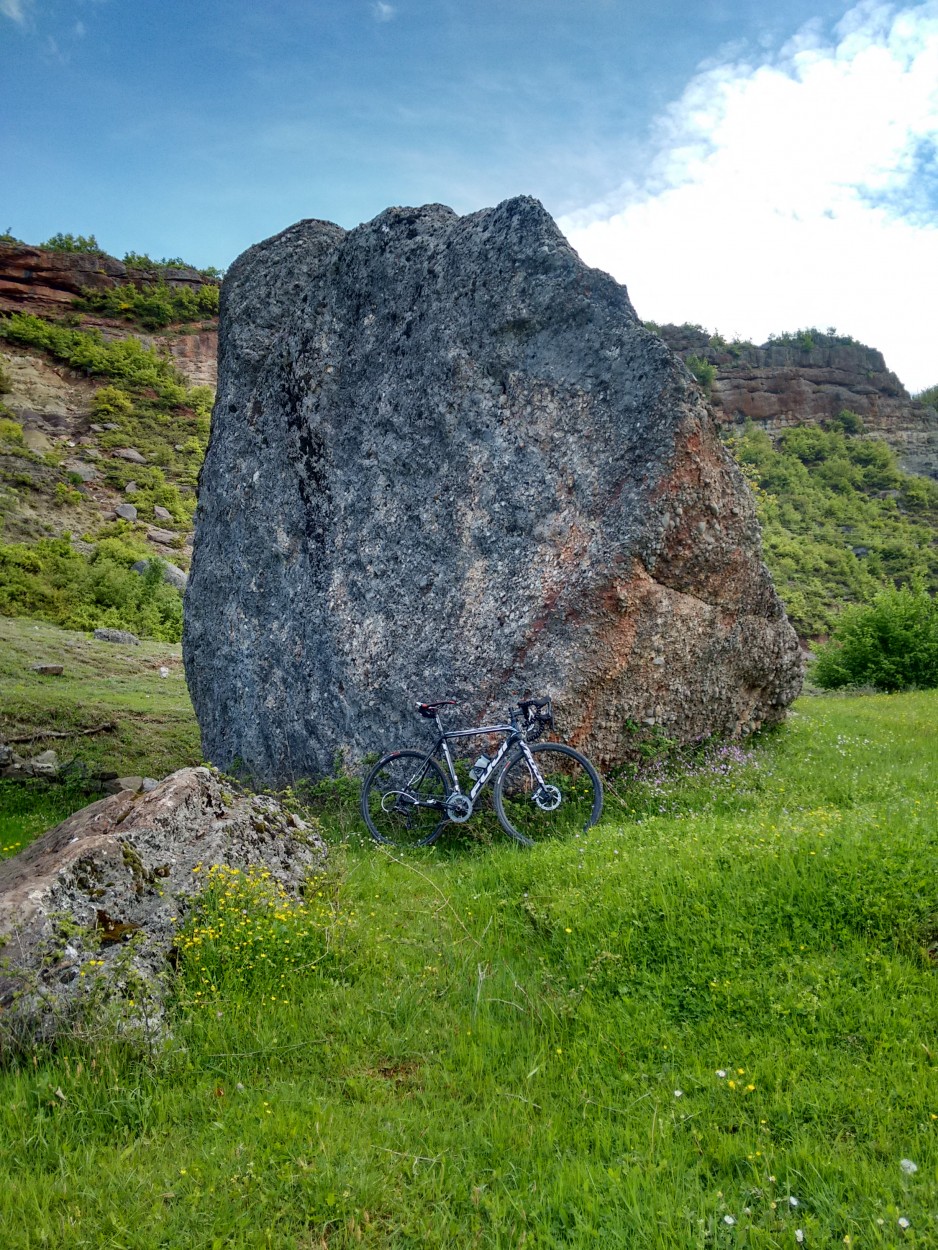 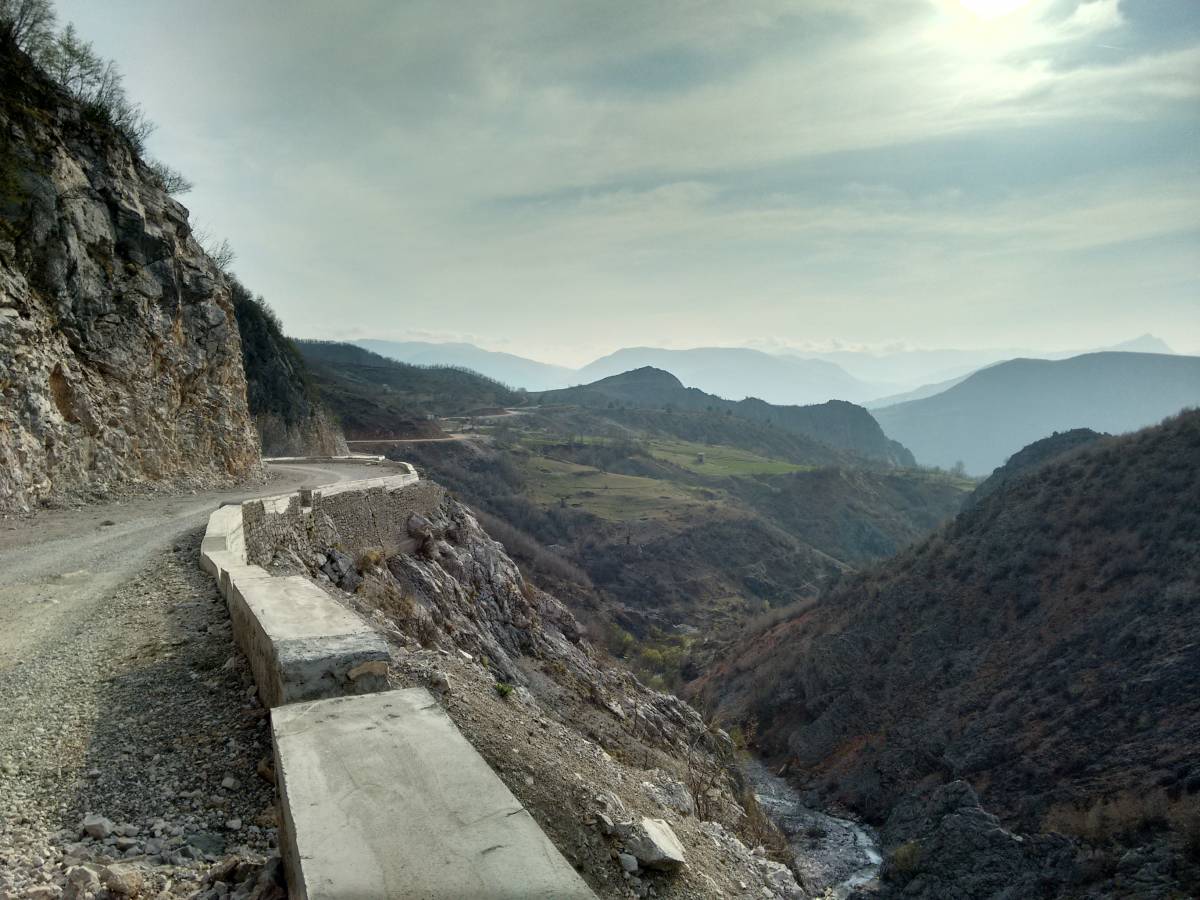 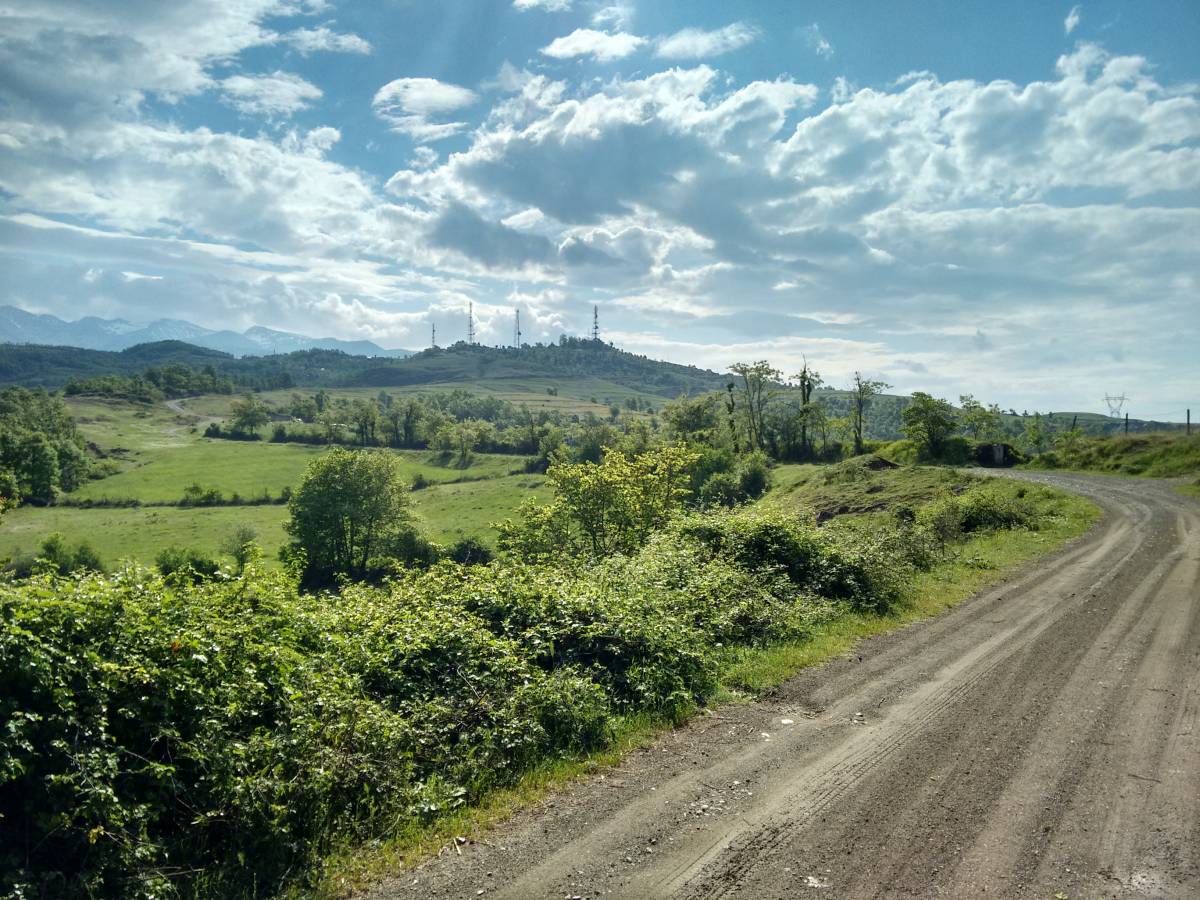 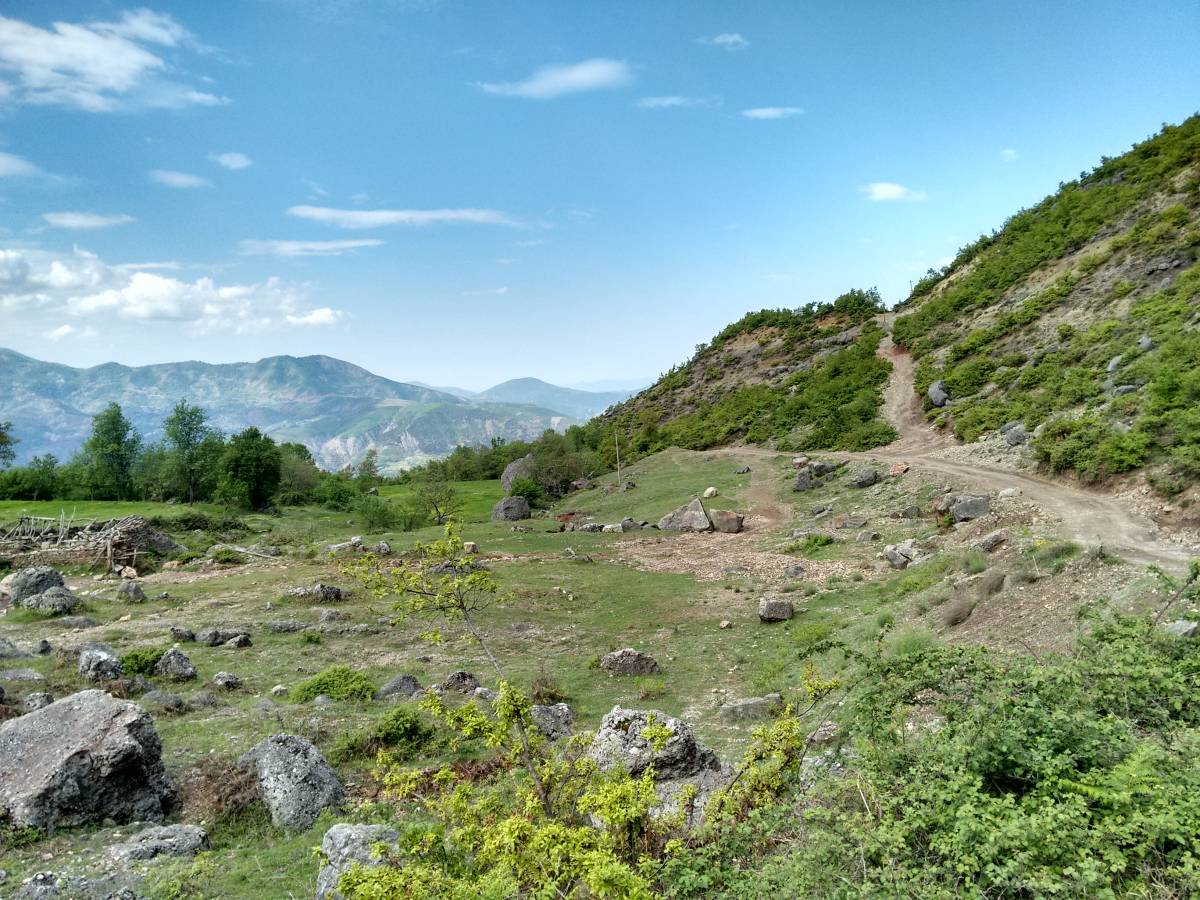 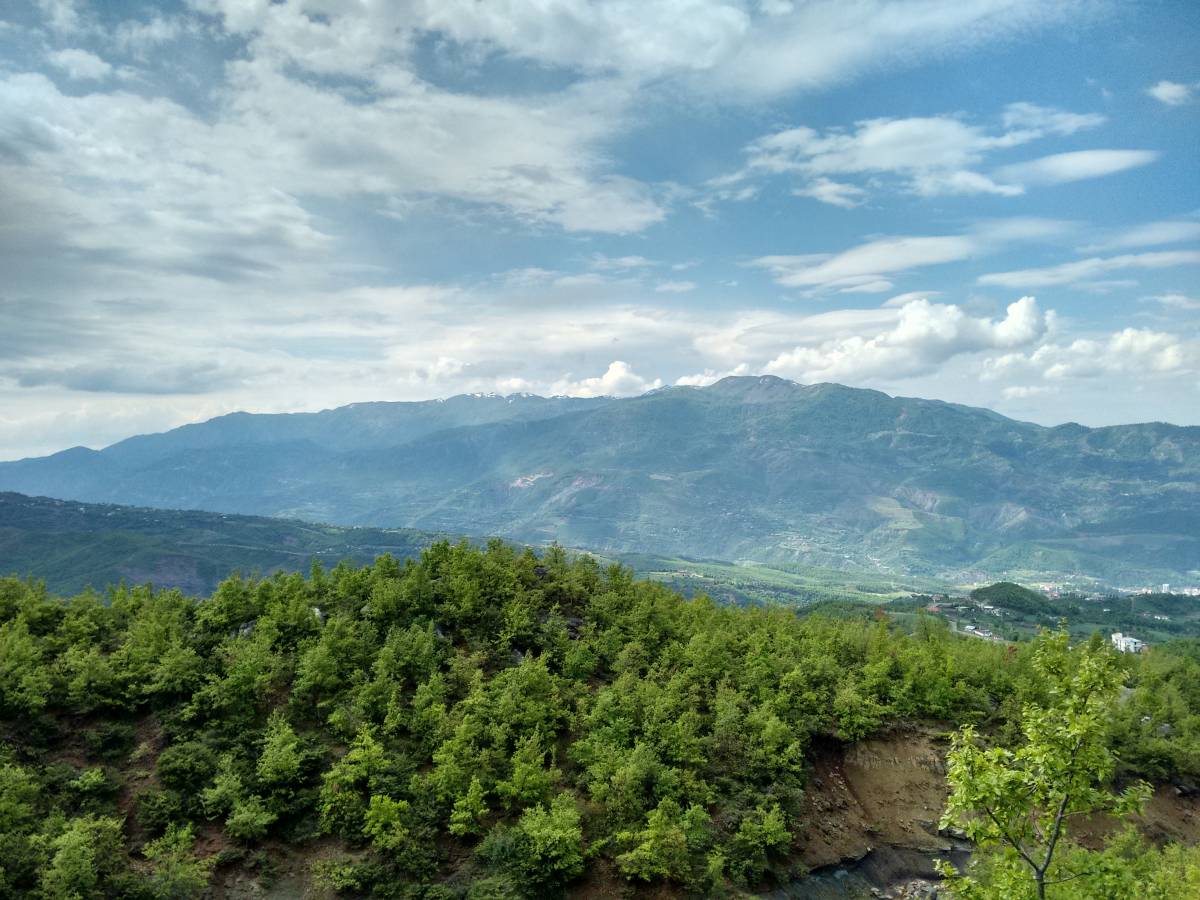 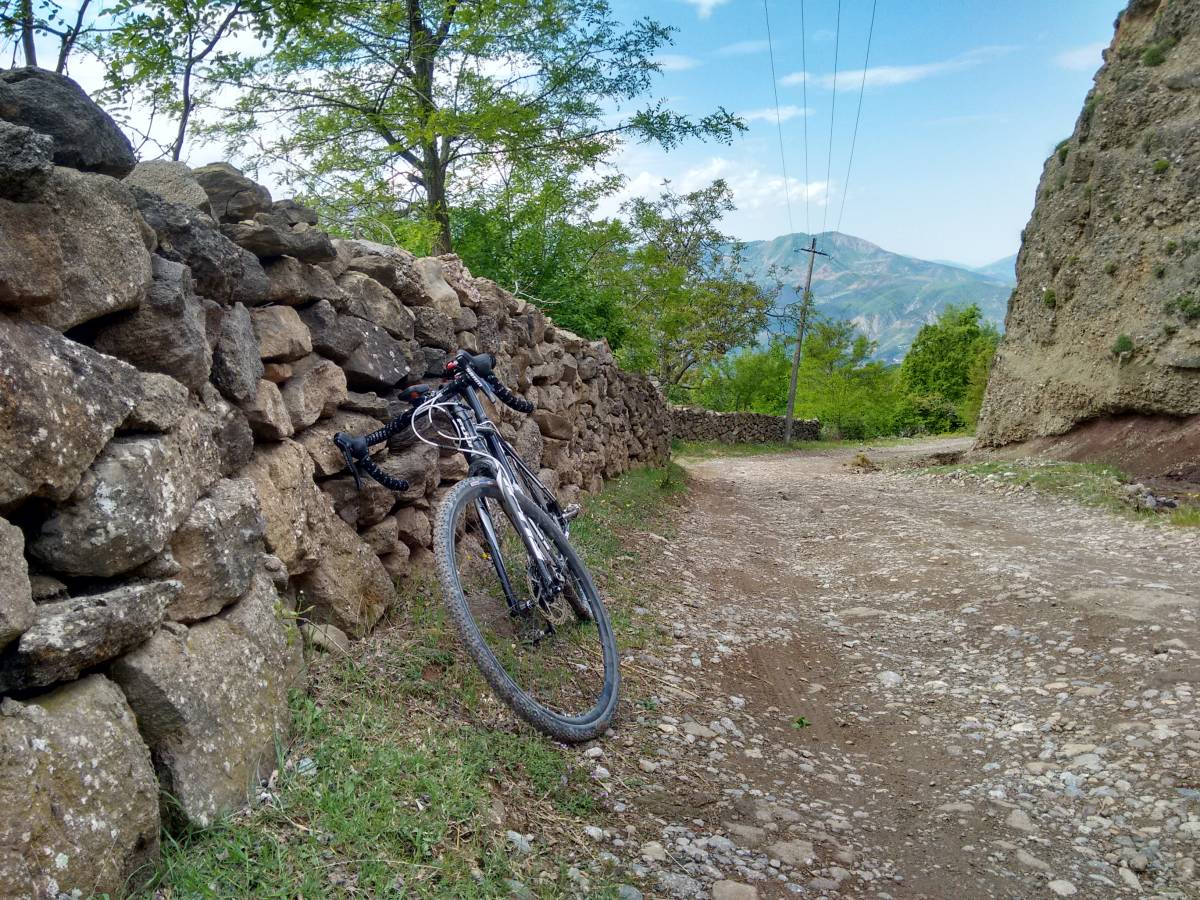 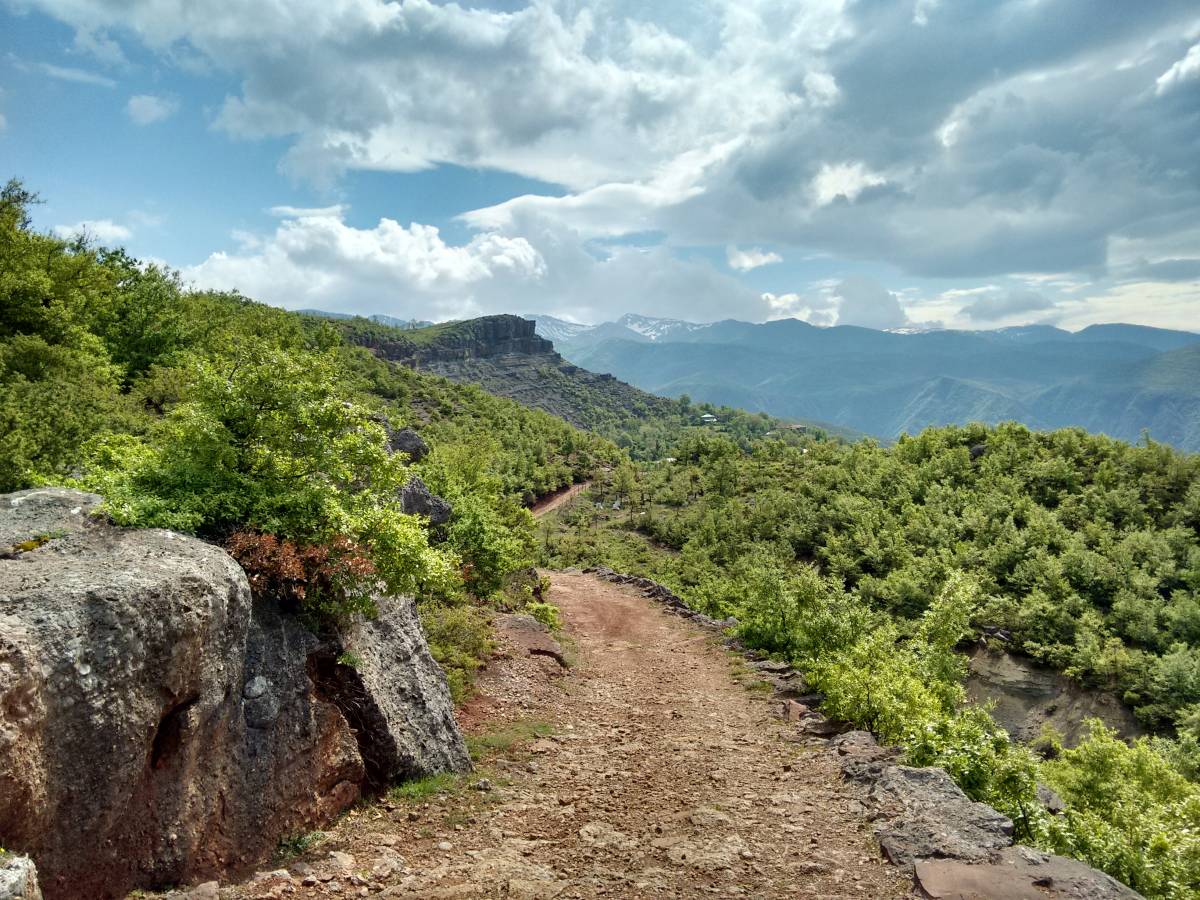 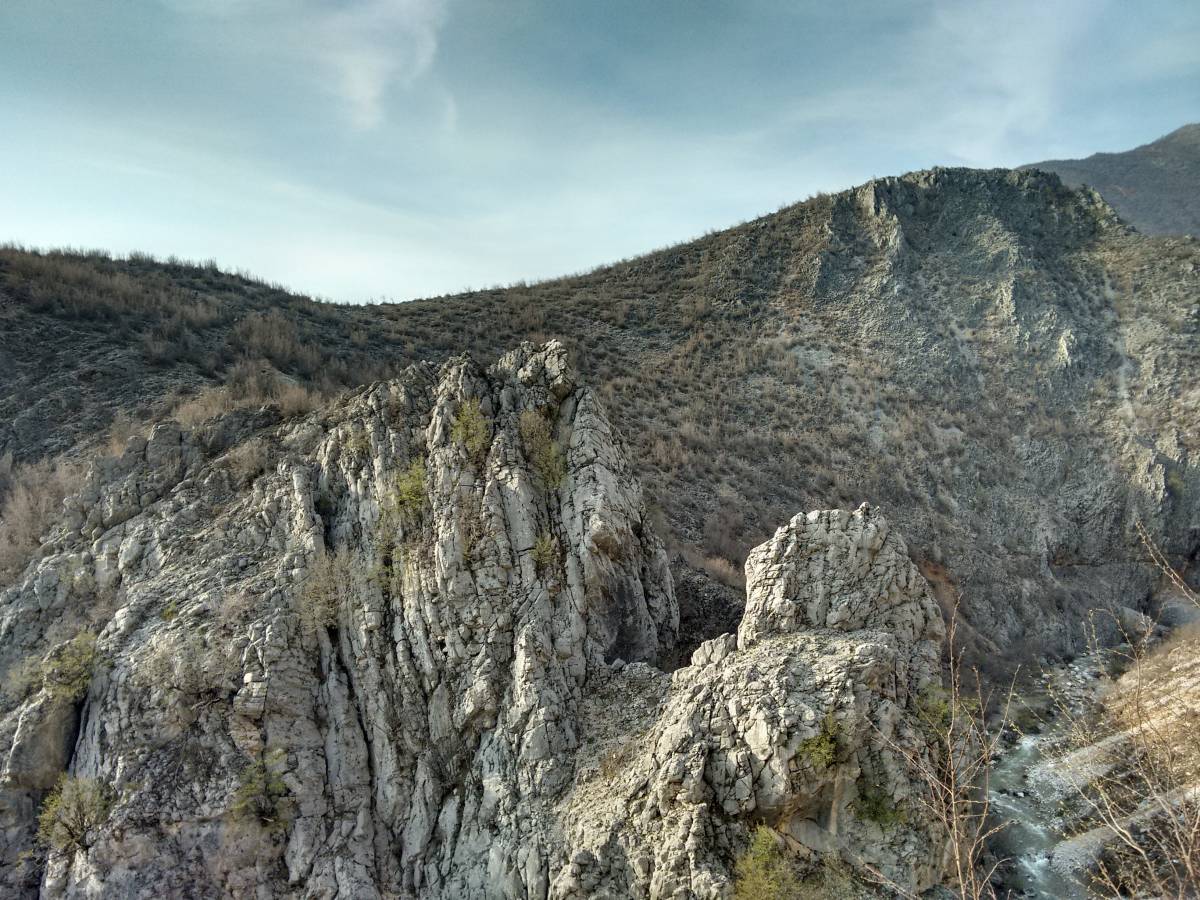 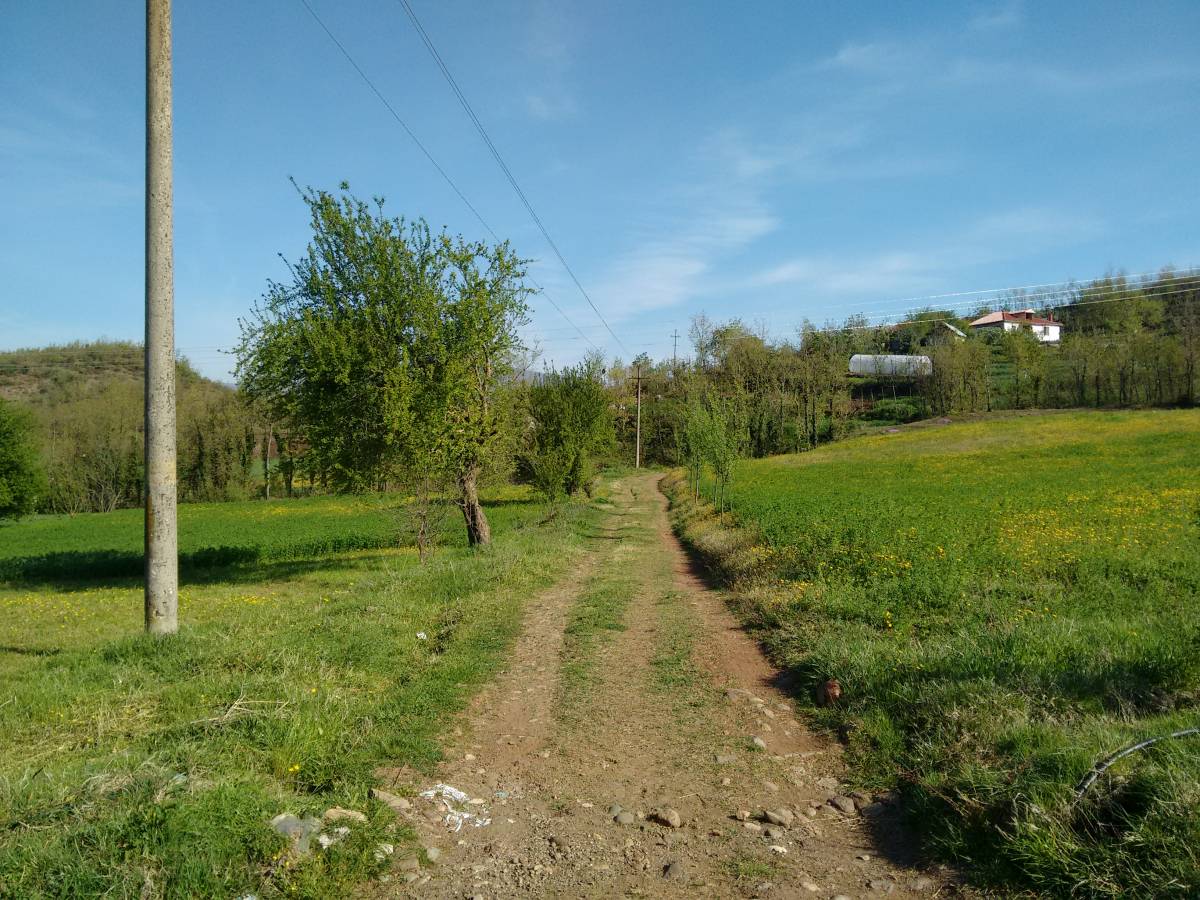 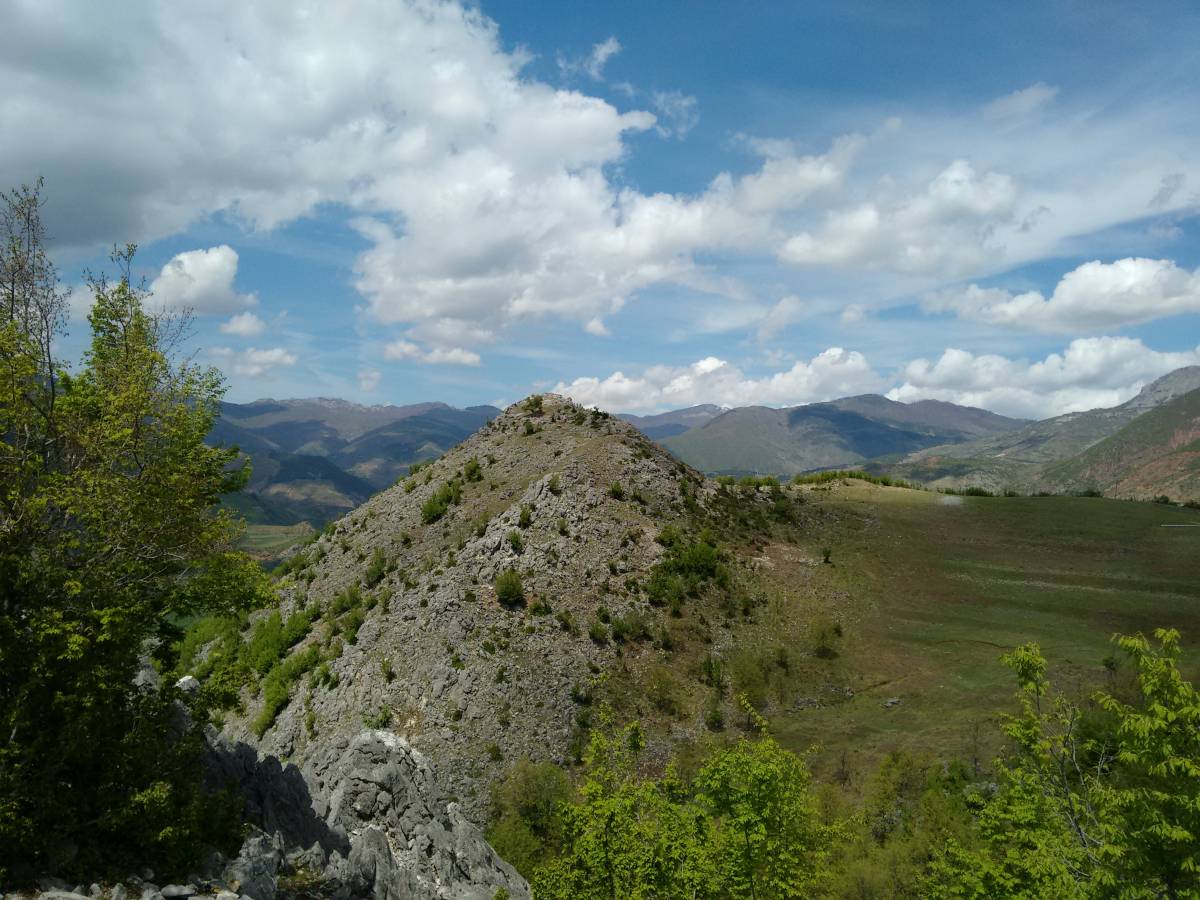