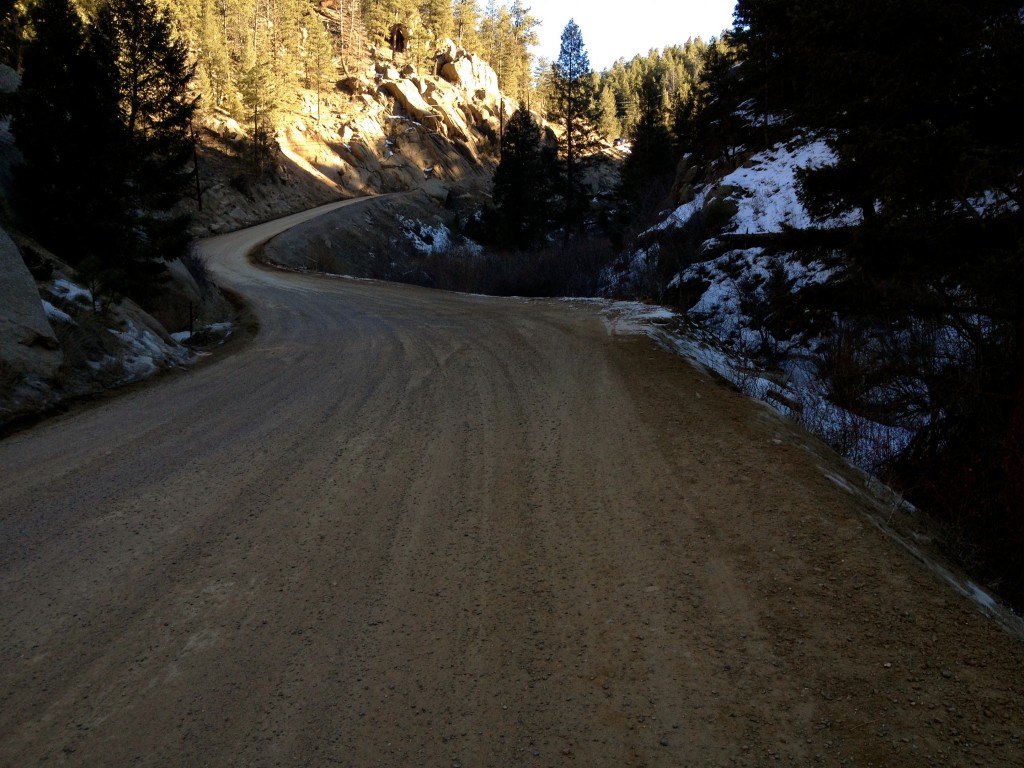 Having this week off work in January meant base miles, and as many as possible in a few short days, since the flanking weekends would be spent skiing with the family. The weather in Colorado had been very temperate the past few days, and the forecast for this day was a high of 60-65 F (15-18 C). Knowing I would not have another opportunity like this for a long while, I decided to go big on this day of days. I had gone on a long ride the previous day with Stephen and Larsen up Golden Gate Canyon and Robinson Hill, but given the temperature and time available, a ride of 100 mi (160k), or more, was in clear view. After a 68 mi (110 km) ride with 6000 ft (1850 m) the day before, a flat loop seemed wisest, but I like to climb, so I convinced myself that a little climbing would be acceptable. Climbing a little (or a lot) would open up much more interesting route options, for the flat routes around Denver on the plains are rather tedious.

So, armed with Google Maps, STRAVA route planning, and some knowledge of the canyons southwest of Denver from fly-fishing day-trips with my wife, I did a little research and settled upon a general route idea. I would start out easy by quickly bearing south-southwest on the South Platte River bike path. From Chatfield Reservoir, I would climb up the fantastic long climb in Deer Creek Canyon via High Grade Drive to Pleasant Park, where I could obtain extra water from the Grange stop (well-known to cyclists in the area). There would be no services until Sedalia, some 35 mi (56 km) away with some serious climbing and dirt along the way.

Once in Sedalia, I’d find my way north to Chatfield and ride the path home. I ballpark estimated total mileage would be around 100 mi.

** For the record, I should note my serious aversion to bike/multi-use paths in general. For the most part, they are mind numbing, flat, and dangerous (think runners with earbuds, dog walkers, children learning to ride bike, etc). However, when in a pinch for time, they are often a fast way to avoid many street lights over a long distance that allows one to get to/from the “meat” of a longer ride. **

I had planned on leaving home around 10:00, since sunset this time of year is 17:07. However, a few items and errands delayed my departure until 11:30. Feeling a little apprehensive about this, I pushed it (fear of getting lost, having a serious mechanical, or failure of will that required a call to my wife to pick me up, etc) to the back of my mind and decided to go, albeit now carrying front and rear lights. This turned out to be a wise move. I headed out, the sun shining brightly, temperature already in the upper 50s. I quickly shed my arm and knee warmers, thinking perhaps I should have applied some sunscreen. But, I’m probably vitamin D deficient this time of year anyway, so I threw my leg back over the saddle and moved on. I was thoroughly enjoying the cross-tail wind down to the reservoir, willfully ignoring the fact that, if the wind didn’t change course, I would be fighting it the whole way home when I was tired.

I made it to the reservoir in record time and headed up Deer Creek Canyon, riding a little ways with a strong older gentleman named Charles, who used to race during the 7-11 days against the likes of Michael Carter, Phinney, etc. As we were talking, he remarked that his best Mt. Evans result was 9th behind winner Alexi Grewal. So this guy can ride. Fortunately, he was going straight up Deer Creek Canyon, and I was soon turning off to head up High Grade. We parted ways, and High Grade had its way with me in this early of early season rides.

At the top, I stopped for a few minutes to refill a water bottle from melting frozen water bottles in the coolers at the Pleasant Park Grange. I folded up a couple dollar bills and deposited them into the donation pole and rode on.

To connect High Grade to the South Platte River canyon, the best way to descend is via Broken Arrow Road to S. Foxton Rd., which turned out to be a ripping smooth descent. Cold in the shadows, warm in the sun. I stopped along the way to try my hand at an iPhone selfie a la @velo_steef, but this is all I could come up with: 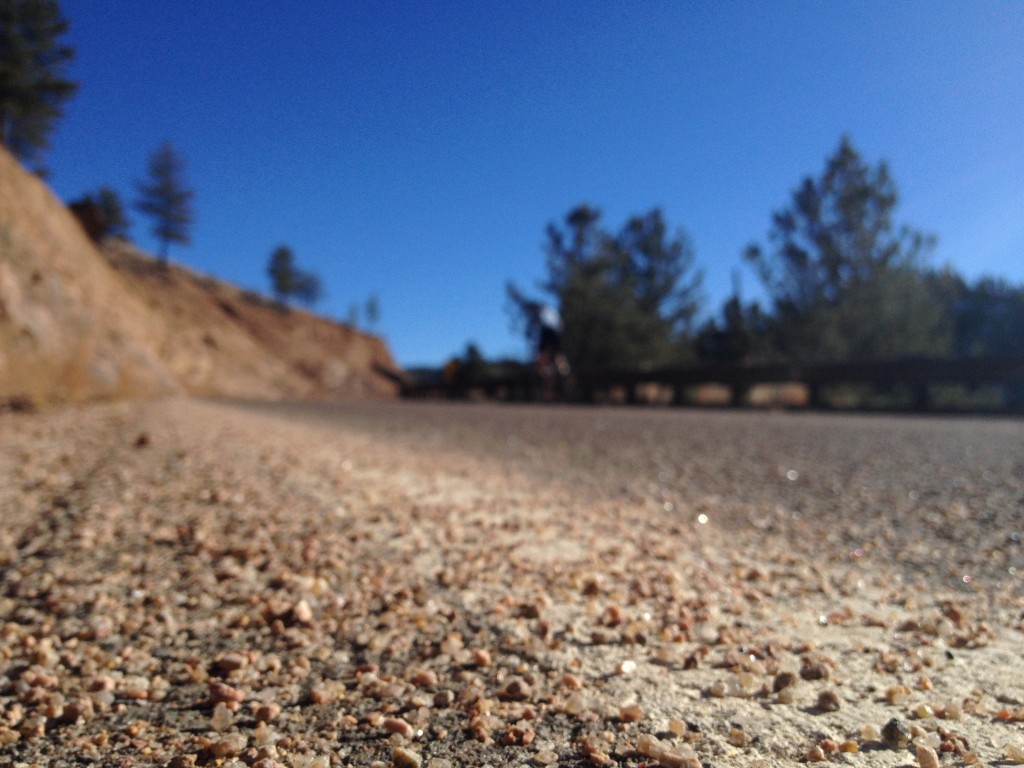 Frustrated, I packed up and turned left at the bottom of Foxton onto Highway 96, W Platte River Road. I thought to myself, “I have to bring Stephen here, so he can properly photograph this.” Later in the ride, while trying to capture the beauty of the winding S. Platte, this thought would be a recurring theme.

At the bottom of Foxton, there was a construction crew, but they let me through. The W. Platte River Rd. is just that- a mostly flat, hard packed, dirt road immediately adjacent to the gushing S. Platte R. This time of year, there were sections of river entirely shrouded in an icy roof. The colors were brilliant – the sunbeams refracting off the crystalline transient river ceiling. 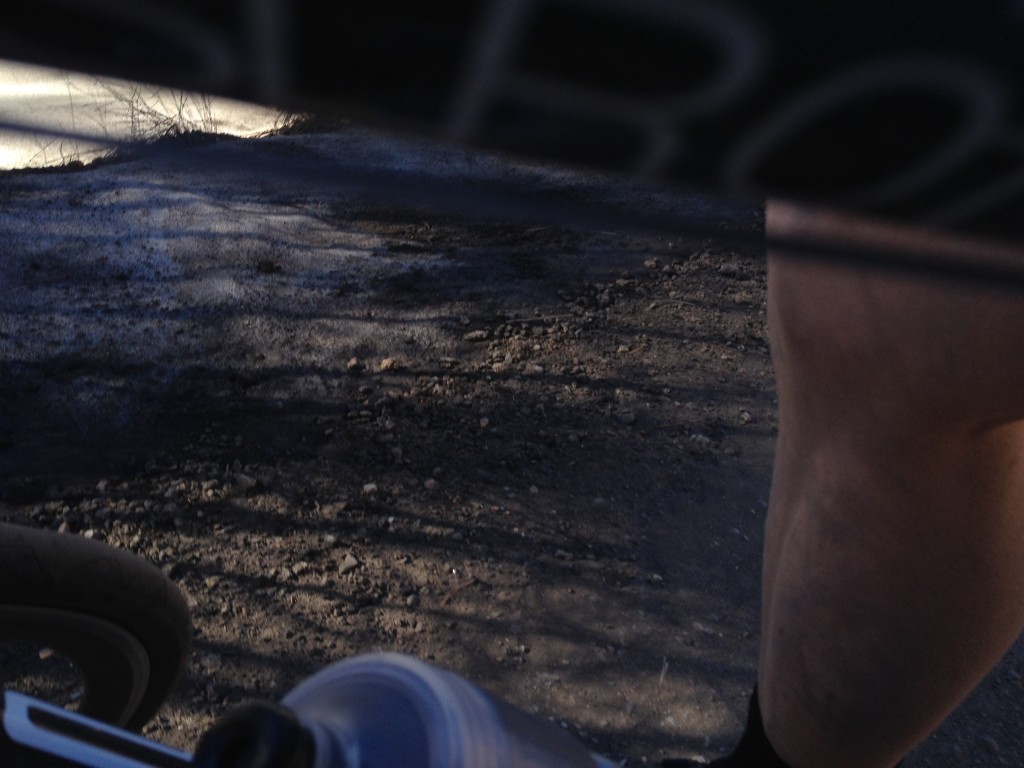 There were some washboard sections of this road, but it truly wasn’t bad at all. There was always a smooth section in which one could ride. 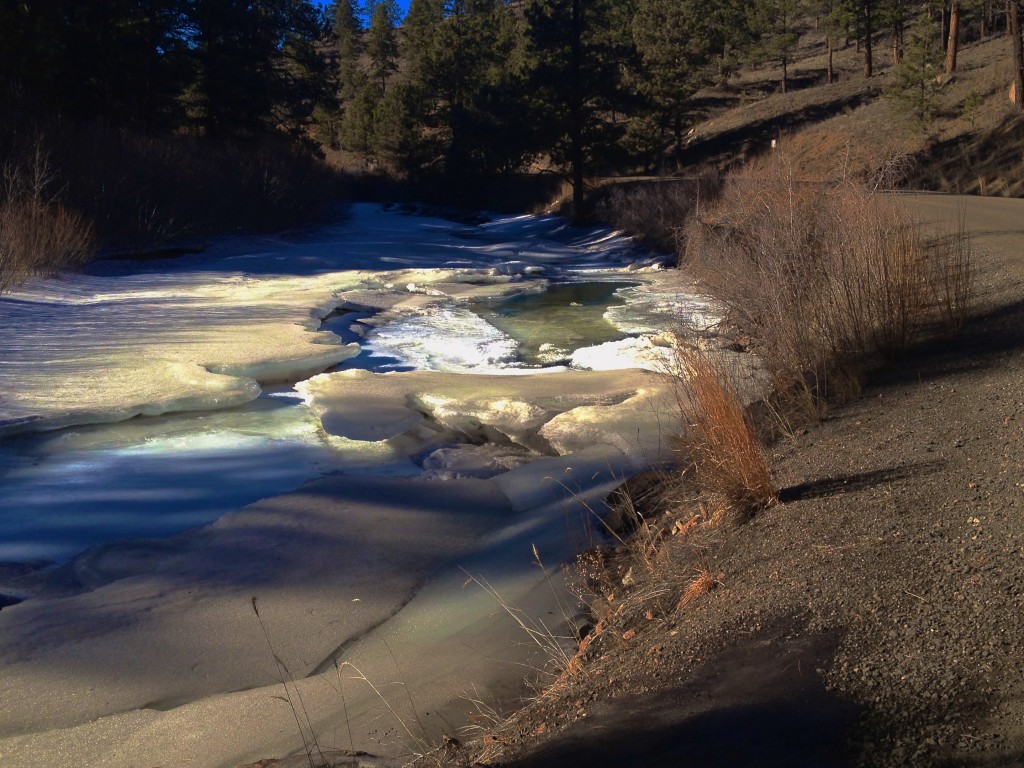 Everything else is brown, but there is color in the water. 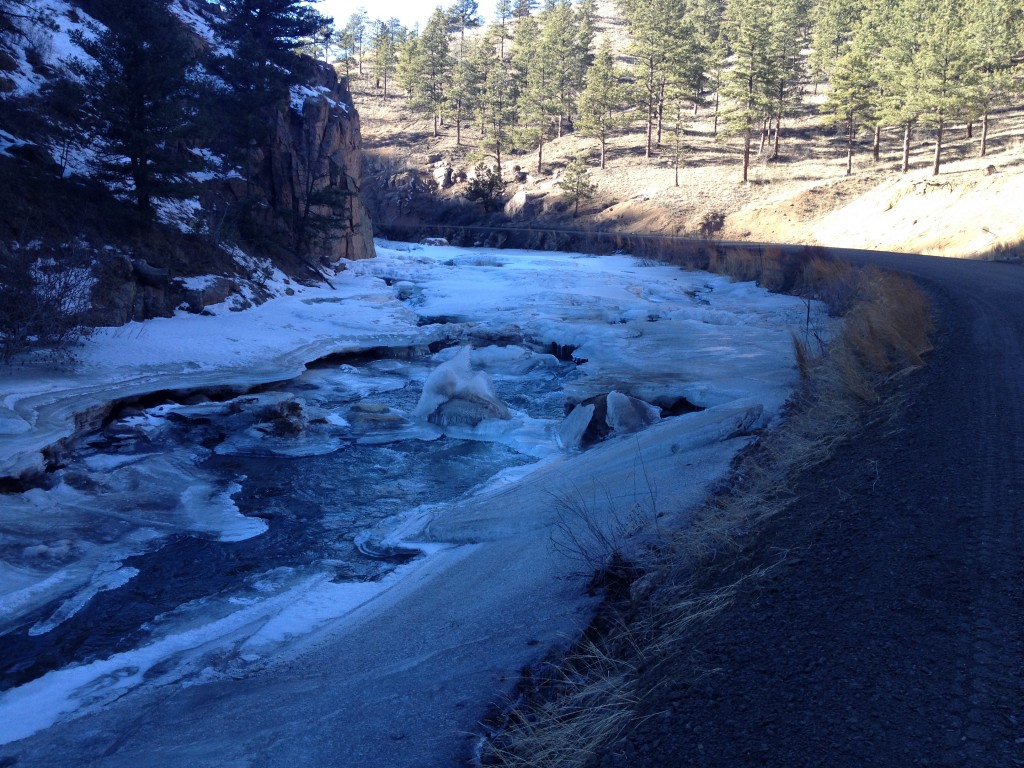 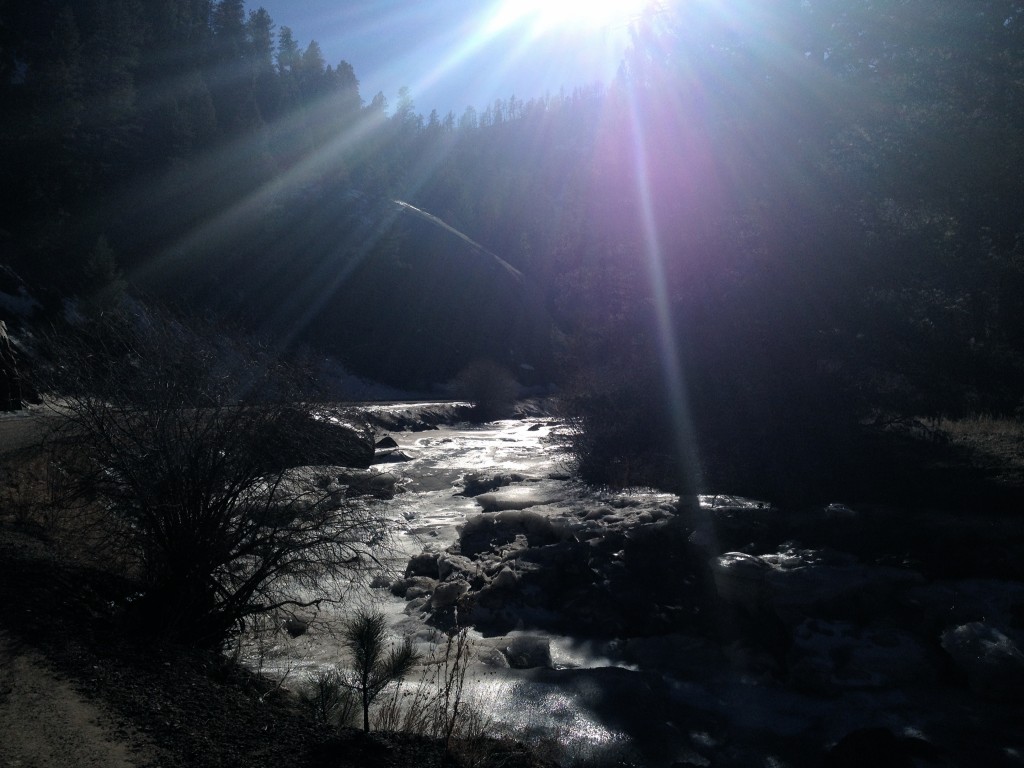 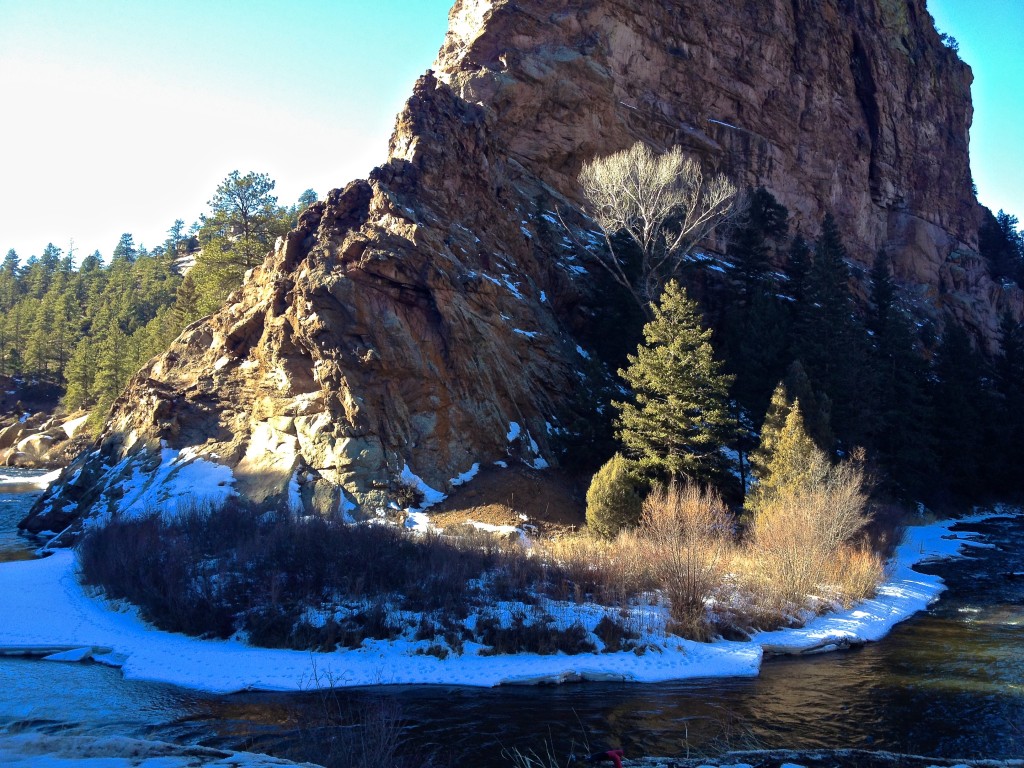 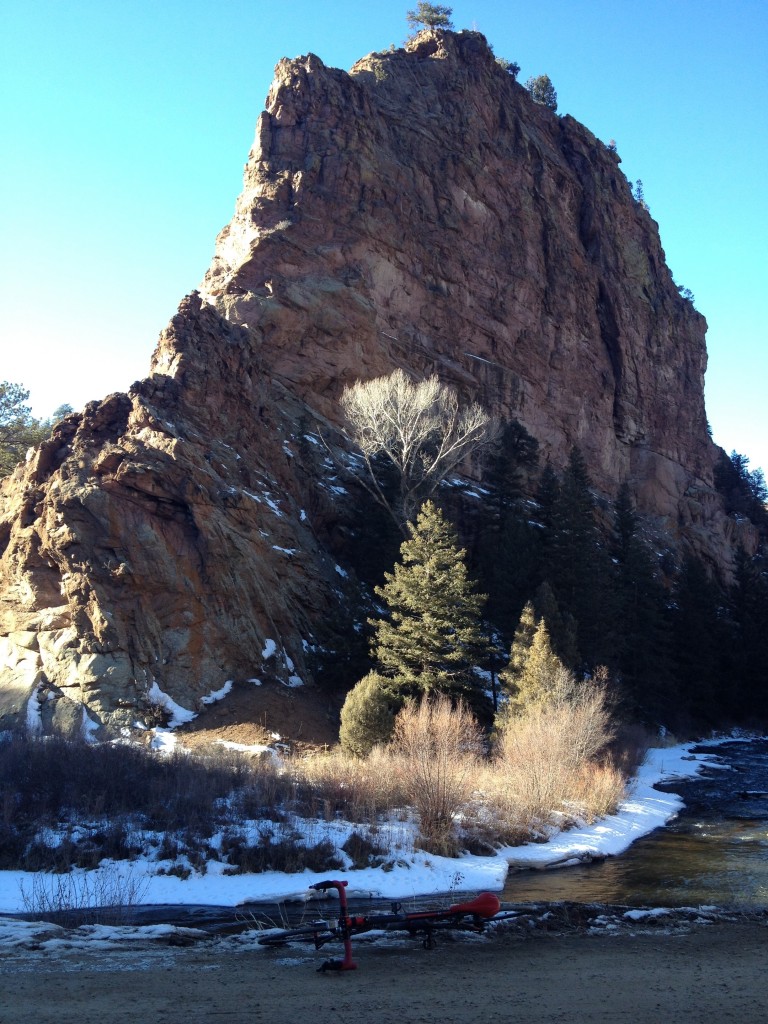 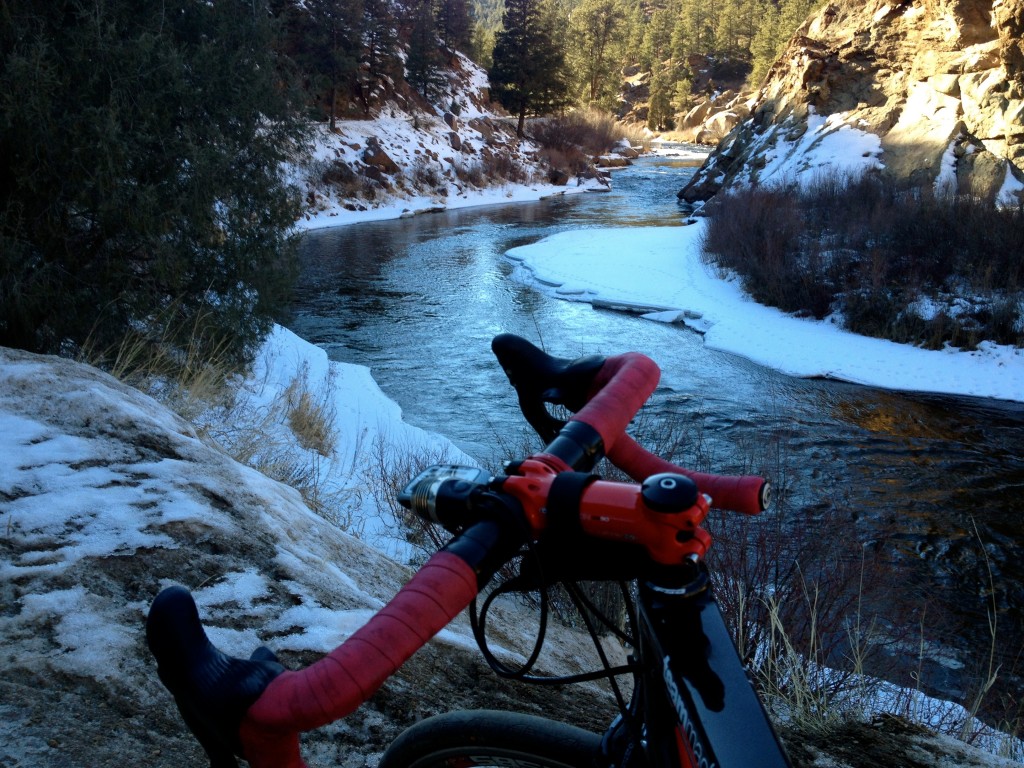 Just when I was thinking I was entirely lost, I spotted it- a well-marked left turn onto West Pine Creek Road with “To Sedalia” signage began the grunt up this short kicker. You can also ride another couple miles out of the way to catch the next left onto Highway 67 proper. This section hurt, with my January legs at about mile 56 for the day. The road is in good condition, but I could not be out of the saddle much, as the rear tire would slip on the steepest sections. I did stop on a short stair step on the climb to take a photo:

It’s pretty safe to say that after climbing up this wall, I thought I was done. Well, that’s not even close to being anywhere near true. There’s a shallow rise up until the road meets Highway 67, where you take a left onto pavement. From there, all I could see was up. Demoralized but defiant, I continued on. There were several false summits before finally cresting at Rampart Ridge Road, which, apparently, is a favorite among the motocross and off-road 4×4 folk. I believe this is the same Rampart Ridge Road that continues down to Garden of the Gods, which I’ve ridden a good portion on the single speed ‘cross bike before.  From here, it was a very fast and fun descent with a couple nicely banked switchbacks to the slope of the foothills and a very nice easy 30+ mph cruise down to Sedalia.

This is where I needed some help, so I grabbed:

A quick look back west over my shoulder was all I needed to do to learn that I had better start moving. The sun was quickly sinking above the treetops on the hills I had just conquered, and I still had over 30 miles to get back home. When asked about a safe way back to Chatfield from here, the kind station attendant said, “Well, there’s a convoluted and complicated way through Louviers that’s tough to explain.” So, I took off on the frontage road as long as I could before getting on the death trap of Santa Fe. I thought there were be nice and wide shoulders. Well, no. That was a folly. Another maxim of mine – don’t bike on 55+ mph roads. Ever. Well, I had to in this case – no shoulders, fast cars, trucks, etc. Just when I thought I couldn’t pucker any more, the exit for Titan Road was upon me, and I greedily took it, breathing a sigh of relief. However, heading west at dusk on what turns out to be a busy east-west road, is not such a good feeling, despite the decent bike lane given to me.

Once back in Chatfield Reservoir State Park, I set the bike on cruise control back north into the headwind towards home. I made it about an hour after dusk. Bone tired and a little delirious.

This is one of my favorite rides to date on/in the front range of Colorado, and I highly recommend it on a nice day. I would stay away from it if there has been recent snow or prolonged cold temperatures after a snow. Be sure the roads have cleared before tackling this one, because services are few and far between.