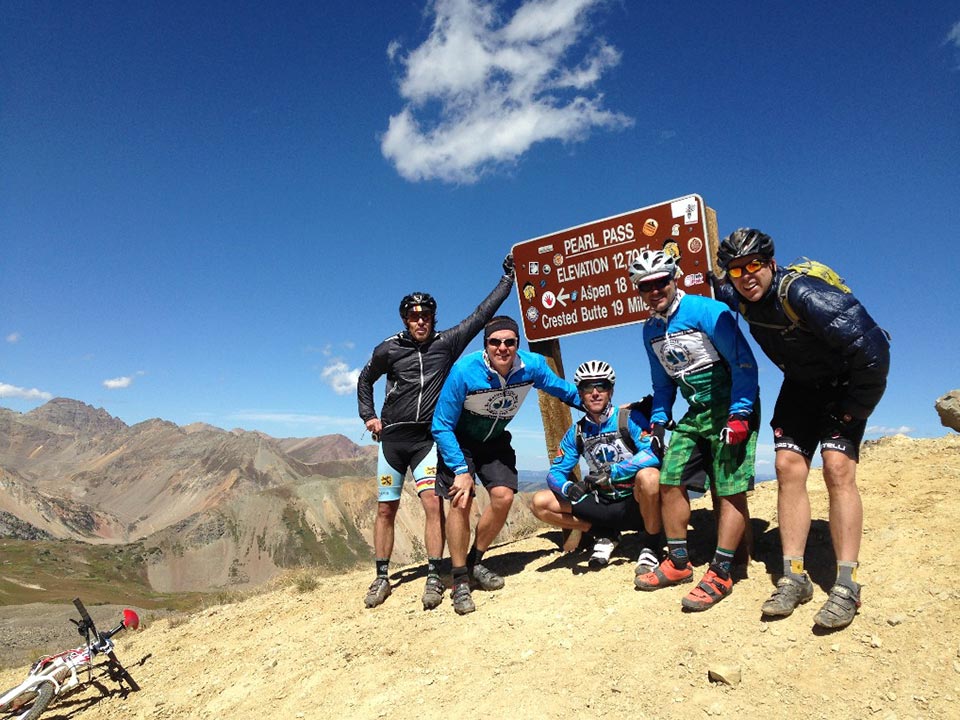 Despite the early challenge of the trail we were glad to leave Marble after a chatty, disheveled, truck-driving local parked to tell us “I don’t like bikers” (cyclists! … but I didn’t correct him) and “I should have the right to shoot ’em if they’re riding on the road”.  After our brief chat it was clear why he lives in Marble (I hope he finds his). This encounter combined with an earlier car ride discussion of the ‘unmentionables’ such as flat tires, mechanicals, crashes, and even weather cast a bit of a superstitious shadow. The stoke of backcountry riding for the next 2 days quickly conquered any trepidation, however, and we were soon rewarded with the majestic view of the famous Crystal Mill. This small summer town surrounded by peaks has a few cabins and was once a thriving mining town that dates back to the 1860s with a population over 400.

Crystal Mill
From here the road continued t​o climb with several steep and loose sections requiring some walking. We approached the Devil’s Punchbowl marked by a series of water falls and a shelf road that has claimed the lives of many 4-wheelers. It was a sustained steep climb with loose rock the size of cantaloupe.  We rode some sections but it was mostly walking here.

Despite the recent heavy rain the river crossing at the top was not as deep as we anticipated or when I rode this last. In 2007 I had chest deep water but this time it was only up to our knees. It was rideable but the cold water must have taken its toll on the brakes of Sherwood and Sterner as they both lost hydraulic brake pressure soon after the river crossing. After more climbing we arrived at the top of Schoffield Pass and took a break to eat and ‘pump’ their brake levers to regain hydraulic pressure. Luckily it worked well enough for us to continue our route by turning uphill and onto the famous 401 trail.

Despite the additional steep singletrack climb to the top of 401 Trail it was hard for us to believe that we had spent over 3 hours to ride only 10 miles. The elevation gain of 3000 feet helped put it in perspective however.

The 401 Trail is a favorite of many but I was glad it lived up to its hype for first timers Sterner and Sherwood. It was pure bliss riding down the smooth flow of singletrack through fields of remnant wildflowers with autumn foliage. And thankfully their disc brakes functioned.

The 401 Trail with Mt Crested Butte in the background

As we finished off 401 and descended upon Mt Crested Butte were knew we had arrived in style as there’s no better way to see this amazing valley than to arrive by bike over one of the passes. Our shuttle driver (who’s also my awesome wife, Danielle) drove over Kebler Pass and was there awaiting our arrival with cold beers!  Day 1 was in the books.

After a fun night at the pool/hot tub then Secret Stash for pizza and beer we awakened to another perfect, cloudless day.  Started in 1976, 2014 marks the 38th edition of the annual Pearl Pass ride and makes it the oldest organized mountain bike event. The world of mountain biking has many thanks to this ride as it forged our sport with early pioneers riding and testing their equipment on these rigorous trails. Klunkers have come a long way to modern day bikes but a few showed up riding vintage bikes and Klunkers to commemorate the historic event. Although the equipment has changed significantly, the enjoyment and thrill of riding bikes to such remote places has not.

29 riders lined up that morning at the Crested Butte Mountain Heritage Museum (and former location of the Mountain Bike Hall of Fame (MBHOF)) while 8 people had left the day prior riding original klunkers with a single gear and drum brakes!  Our ride leader and previous MBHOF curator, Don, hasn’t missed this ride since 1980 and was overcome with emotion as he described the significance of this ride and thanked the riders participating. Having started mountain biking in the 1980s while living in the San Francisco Bay Area, I’m passionate about the origins of this sport as well and felt honored and privileged to be a part of this historic event.

After a few easy miles of flat roads we began to climb… and climb… and climb. Soon we saw the magnificent high peaks of Teocalli and Maroon Bells. The more we climbed, the steeper and more rocky the road became….which eventually meant walking. Thankfully I anticipated the hiking and brought shoes with good hiking soles instead of my stiff carbon-soled race shoes.

Reaching the top of 12,705′ Pearl Pass felt like an accomplishment. There’s no easy way to get up here other than by earning every foot of the steep climb. Except if you were one of the folks on ATV with a generous BMI and carrying Coca Colas and bags of chips (all of which looked good, by the way, and made me think they’re onto something here).

Top of Pearl Pass:  It’s all downhill from here but that doesn’t mean it’s easy!

We were repeatedly warned by the experienced riders of the descent into Aspen that awaited our already fatigued bodies. These warnings ultimately changed our initial plan of bringing beers to enjoy at the top of the pass. They spoke of fields of rocks the size of “watermelons” and “boulders” and the risk of crashing and bodily harm. Unfortunately they were right and not exaggerating. The descent was even harder than I expected with large rocks bordering boulders that were loose in unpredictable spots and and occasionally covered by a steady stream of running water. Some sections looked rideable but this would be like playing Russian Roulette: You can ride over most of the rocks but it just takes one to take you down. Not a good place to need a rescue. I found that some sections even challenged my hiking skills.

These rocks made made for an interesting descent…even Sherwood had to walk!

The views never ceased to amaze even the most seasoned of backcountry travelers and made all our effort worthwhile.  We took our time descending which seemed endless as we finally arrived onto paved road in beautiful Castle Valley in Aspen.  Sterner still had plenty of legs to briskly pull us the remaining 13 miles in to town. Malone got held up on the descent by a sidewall tear and then decided to make it more challenging by losing his right pedal at the top of Pearl Pass. He rode the entire sketchy descent with only the pedal spindle. I blame our superstitious discussion the previous day for haunting him … but at least he didn’t ride in jeans this time!

We arrived at the Paepcke Park in downtown Aspen on a lovely sunny afternoon. We took off our wet shoes and sat on the lush green grass, realizing that the adventure and memories of the last 2 days would always live with us. We made new friends with genuinely nice people who share our passion for nature and mountain biking and it’s history. We basked in the camaraderie that comes after sharing a challenging experience and drank cold beer which always tastes better when it’s earned … and today we earned it.